From the anti-trans politician accused of harassment to the presidential race, it's the year of the GOP creep 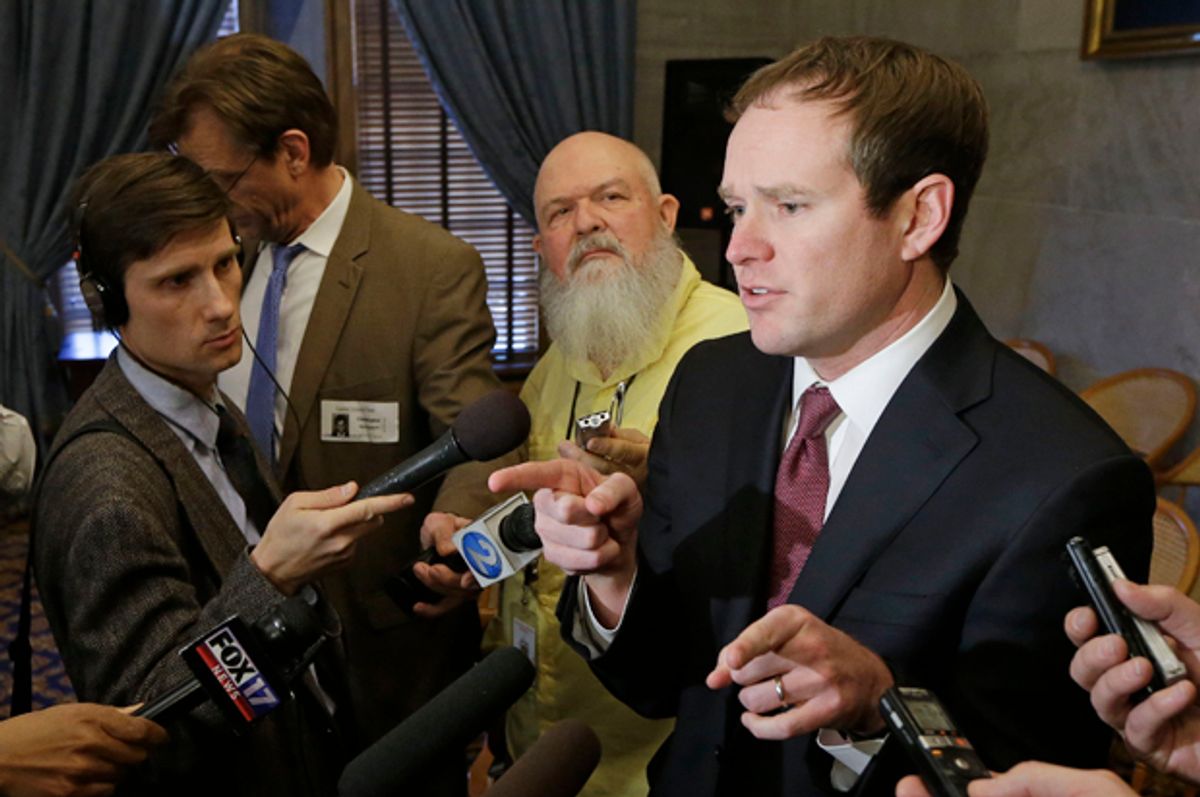 In this week's "because of course" news: A sponsor for an anti-trans bill in Tennessee, state representative Jeremy Durham, has been deemed "a continuing risk to unsuspecting women" by the state attorney general and has been put under strict rules regarding his movements in state offices, out of fear that he will compulsively sexually harass women he comes into contact with. Durham denies the allegations, but has already resigned his position as House majority whip because of the constant drumbeat of women saying he's a pig who won't quit with the inappropriate behavior.

The situation is one of rather unsubtle irony because the anti-trans bill that Durham is backing, which bans trans students at public schools and universities from using the bathroom that corresponds with their gender, is being defended using the same urban legend employed to pass similar legislation in other states: That men dress as women or pretend to be trans in order to hide in the ladies room to harass and even rape women.

This, and it should be needless to say, does not happen. In the real world, predatory men creep on women in a fairly straightforward manner, often acting with a confidence that suggests they don't think there's any real chance anyone will do anything about it.

I recommend the allegations against Durham as a nifty illustration of how this goes. Did Durham put on lipstick and a skirt and try to convince women he was one of them to watch them pee? No, of course not. An investigation by the Tennessean in January turned up three women who allegedly got inappropriate text messages from Durham's cellphone number making creepy statements and asking for pictures.

When these text messages were made public, did Durham pretend to be a trans woman in some bizarre hope that this would somehow justify hitting up young congressional staffers for nudie pics? No, he did not. Instead, he claimed he didn't remember sending them, which, if true, probably has more to do with the hour they were sent (usually after 1 a.m.), and not because there's some elaborate conspiracy to steal his phone and harass female underlings going on.

The whole situation perfectly crystallizes how messed up it truly is to have all these Republicans posture about how they want to "protect" women from all these things that women don't need protecting from, from imaginary rapists in dresses to having to get abortions in clinics where the hallways are six feet wide instead of eight feet wide. Republicans aren't the protectors of women. They are the threat.

Never has this been more obvious than this year, when the Republican war on women really started to reach subway flasher levels. Durham's is the most obnoxious, but far from the only time that this debate over imaginary bathroom predators revealed that the true creeps are Republican politicians.

Last week, Rep. Louie Gohmert proudly declared that the only thing that kept him from lurking in women's rooms to peek up their skirts was fear of getting arrested.

"I was as good a kid as you can have growing up, I never drank alcohol till I was legal, never to, still, use an illegal drug," Gohmert said in a radio interview, "but in the seventh grade if the law had been that all I had to do was say, ‘I’m a girl,’ and I got to go into the girls’ restroom, I don’t know if I could’ve withstood the temptation just to get educated back in those days."

Mike Huckabee, who loves preening about how godly he is, also didn't hold back in revealing that he's an unapologetic creep.

"Now I wish that someone told me that when I was in high school that I could have felt like a woman when it came time to take showers in PE,” he said last year at the National Religious Broadcasters Convention. “I’m pretty sure that I would have found my feminine side and said, ‘Coach, I think I’d rather shower with the girls today.’ You’re laughing because it sounds so ridiculous, doesn’t it?”

This is a man who ran for president, but is all too happy to brag about how he's a peeping Tom at heart. And how his comments made those Jesus people laugh and laugh, tickled to hear one of their fellows confirm their belief that men are the worst. But should get to run everything anyway, in between bouts of wishing they could leer at women while they pee.

No discussion of this would be complete, of course, without acknowledging that the Republican presidential race is between two men that seem like exactly the sort of men women try not to be left alone with.

Donald Trump does so love talking about how he just looooooooves women and will "take care of them" (not in the way that mobster friends would use that phrase, hopefully). It is not worth belaboring the point, beyond pointing out that this, of Trump's many lies, might be his most laugh-out-loud ridiculous one. Even language of "taking care" of women itself belies his claim to "respect" women. You don't respect women by talking about them as if they are children to be carefully guarded from the real world.  But he can't even hide behind a pretense of meaning well but simply using insensitive language on this front, because Trump's lengthy public record of being a leering creep and a pig is not particularly hard to find.

It's not that he took the case, exactly. Cruz's job was to defend the state laws, not write them, after all. But it's safe to say he really put he and then attorney general (now governor) Greg Abbott threw themselves into this case with a passion that indicated that they are true believers in the mission to stomp out the scourge of women getting sexual pleasure from anything but the almighty penis.

The brief insisted that Texas in order to protect "public morals" had  "police-power interests" in "discouraging prurient interests in sexual gratification, combating the commercial sale of sex, and protecting minors." There was a  "government" interest, it maintained, in "discouraging...autonomous sex." The brief compared the use of sex toys with "hiring a willing prostitute or engaging in consensual bigamy," and it equated advertising these products with the commercial promotion of prostitution. In perhaps the most noticeable line of the brief, Cruz's office declared, "There is no substantive-due-process right to stimulate one's genitals for non-medical purposes unrelated to procreation or outside of an interpersonal relationship."