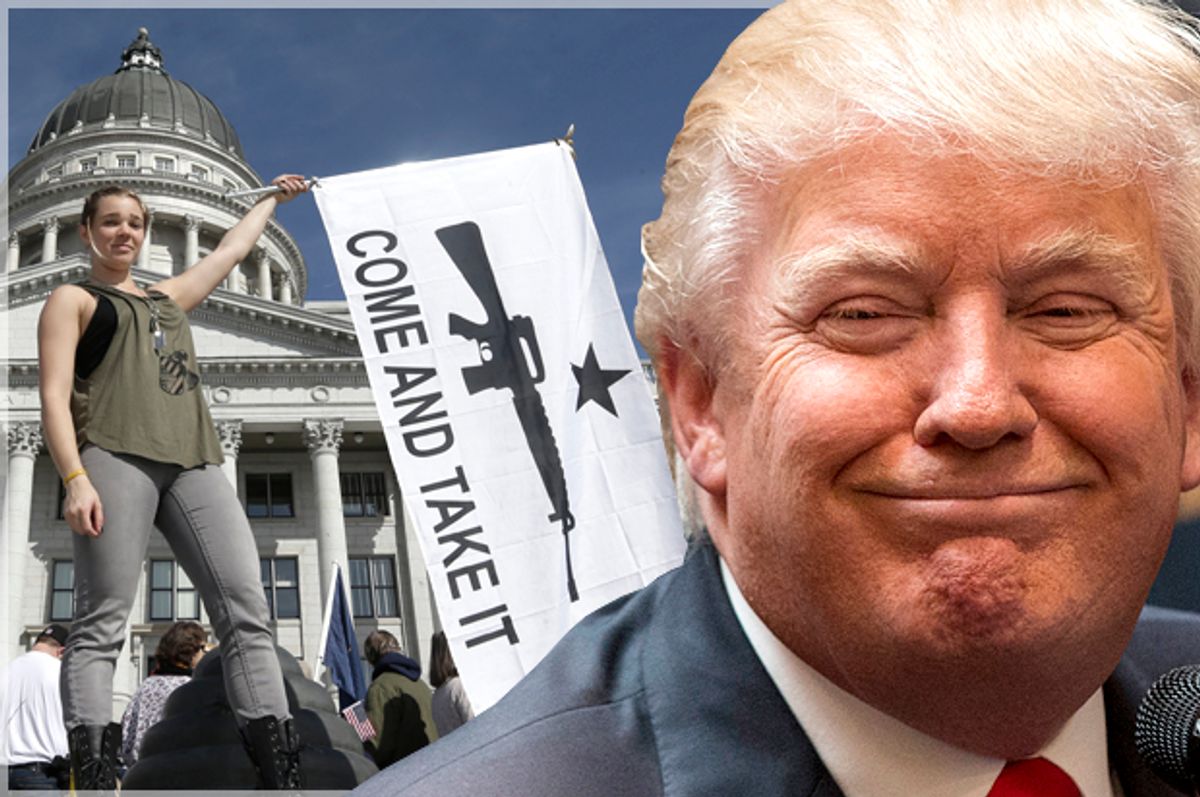 Armed Donald Trump supporters in Pennsylvania are threatening to confront anti-Trump protesters they encounter during an open carry demonstration they plan to hold outside of Trump's Fox News town hall in Pittsburgh Thursday.

While Democratic candidates Bernie Sanders and Hillary Clinton prepare to battle it out on a debate stage in Brooklyn tomorrow, some supporters of the other side's frontrunner say they will be battling any and all anti-Trump protesters who may demonstrate a televised town hall with Sean Hannity and a campaign rally.

According to the Pittsburgh City Paper, local police are on alert after a “Pittsburgh Open Carry Events in Support of Trump” was posted to Reddit this week. "The majority of us will us will be open carrying sidearms and long arms (AR-15 style preferred, but AK’s and such are fine)," the since deleted post read. Pennsylvania allows the open carry of firearms on public property.

“Stopping ANY attempt of roadblocks is our main objective,” one supporter reportedly wrote, indicating the group's mission to physically prohibit anti-Trump protests. The message claimed about 50 people signed up to participate, with an additional 16 set to rove around and help avoid roadblocks from counter protesters.

“I hope any ‘protestors’ who think it might be a good idea to pull some of the crap that we’ve seen done elsewhere remember Pennsylvania has a castle doctrine,” Reddit user ElDuderino412 wrote.

At least one organized anti-Trump protest event has already been announced. According to Pittsburgh's WPIX, at least one local mayor and a Democratic Pennsylvanian U.S. Senate candidate plan to protest "Trump's disgraceful and un-American stance on immigration and human rights in this country."

Pittsburgh’s have reportedly called for additional officers from neighboring cities to aid with patrolling the Trump events.

"Pittsburgh Police are aware of and are monitoring various social media commentary and threats regarding the Donald Trump rally today. We will continue to monitor and validate the credibility of these threats throughout the day, and will respond accordingly," a statement from Pittsburgh's public safety office. "We have developed a robust operational plan to ensure that we are prepared to deal with any emergency situations that might arise during the day and evening. We will be executing that plan with the same crowd management philosophy that we always use, which includes protecting constitutional rights."