The U.S. already intervenes in Venezuela, and all of Latin America. It has for decades — with catastrophic results 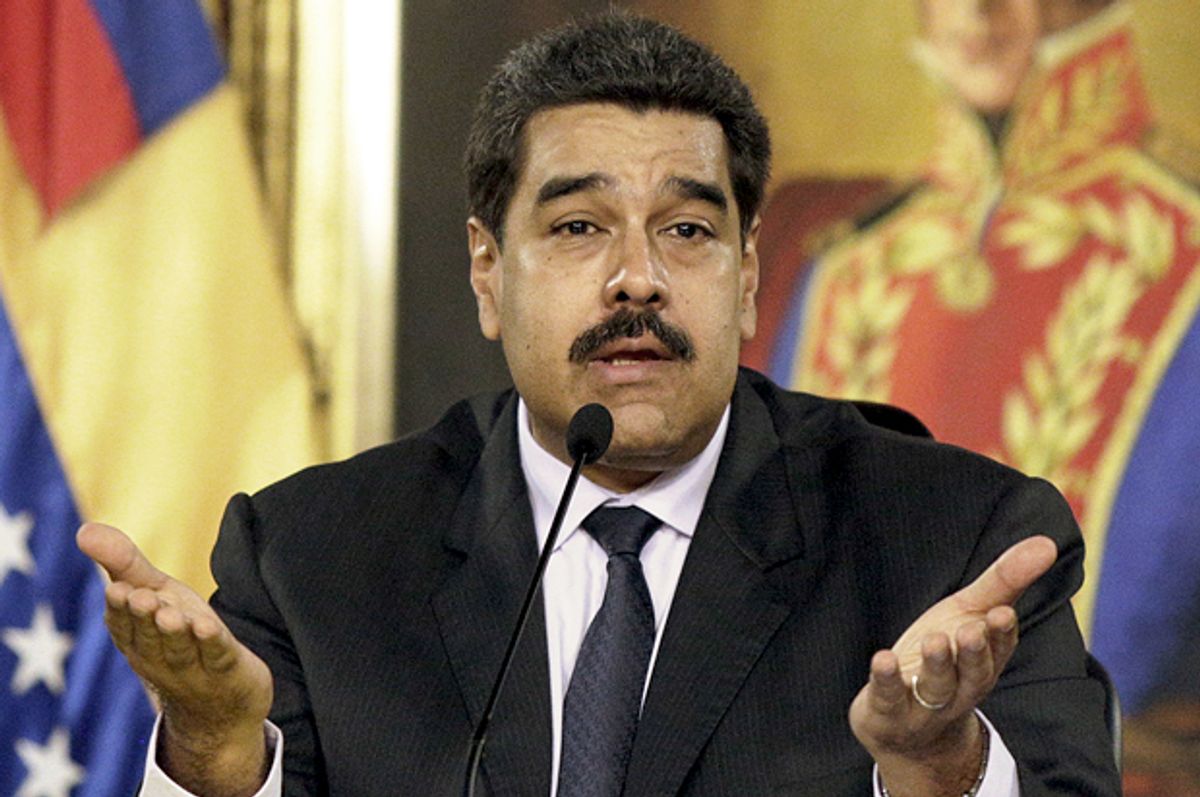 According to the logic of the Washington Post, the U.S. is in desperate, desperate need of external intervention.

The newspaper's editorial board published an op-ed this week insisting that "Venezuela is in desperate need of a political intervention."

Why? Democratically elected Venezuelan President Nicolás Maduro is ostensibly "deeply unpopular," the Washington Post insists, and the oil-rich South American nation is spiraling "toward an economic and political crash."

How unpopular is Maduro exactly? There is no need to speculate; an August 2015 poll found that positive evaluations of the president had fallen to just over 24 percent.

Yet, when compared to governments around the world, a 24 percent approval rating is much better than it may seem.

In the U.S., for instance, a November 2015 poll found that Congress had just an 11 percent approval rating — up from a risible 9 percent in November 2013.

And the approval rating of former President George W. Bush dropped to 25 percent numerous times during his presidency.

Is the U.S.'s own putative democracy in extra desperate need of a political intervention? The logic of the Washington Post appears to suggest that this is the case.

Maduro — a former bus driver and union organizer turned politician — may lack the enormous popularity enjoyed by his predecessor, the charismatic Hugo Chávez; yet, compared to other global leaders, there is nothing exceptionally unpopular about Maduro.

You know who is deeply, deeply unpopular, however? The blood-soaked tyrants the U.S. props up throughout the world — and particularly in the Middle East.

There were few vociferous calls for external intervention when the U.S.-backed Egyptian military overthrew Egypt's first and only democratically elected government, slaughtered at least 817 and likely more than 1,000 protesters at Raba'a and proceeded to imprison tens of thousands of political opponents, human rights activists and journalists.

There were even fewer calls for external intervention when, with U.S. support, Gulf neighbors sent more than 1,500 troops into Bahrain to crush the 2011 pro-democracy uprising; or when, today, the Bahraini monarchy continues to shoot, torture and imprison peaceful pro-democracy activists.

And there are still almost no calls now for external intervention when the U.S.-backed theocratic dictatorship in Saudi Arabia continues to behead dissidents, spread its extremist Wahhabi ideology throughout the world and refuse to grant basic rights to women.

The U.S. military intervention in Afghanistan — now one of the longest conventional wars in U.S. history — was sold to the public based on the promise that the U.S. was fighting for the liberation of Afghan women (who were living under the Taliban, a fascistic Wahhabi group which emerged from the extremist groups armed, trained and funded by the U.S., Pakistan and Saudi Arabia in order to fight the Soviet Union in the 1980s). What of the rights of women who are brutalized and dehumanized by U.S.-allied regimes?

The Washington Post insists that there should be intervention in Venezuela for allegedly violating constitutional norms, but what of the exponentially more egregious constitutional violations — or the constitutional governments overthrown — by U.S. allies?

The editorial boards of U.S. corporate media outlets openly call for intervention in foreign sovereign democracies when they are U.S. enemies, but say little when U.S.-allied authoritarian regimes repress and kill their own citizens.

One cannot help but feel the sting of hypocrisy.

None of this is to even mention the silence surrounding U.S. allies in Latin America.

The Washington Post cites alleged repression of Venezuela's right-wing opposition (which is itself heavily backed by the U.S. and foreign powers, a point that will be addressed later) as a reason for intervention. What of Venezuela's brutally repressive right-wing neighbors?

In 2009, the Honduran military overthrew the democratically elected government of President Manuel Zelaya. The populist left-wing leader was woken up in the middle of the night and kidnapped.

What did the U.S. do? It actively supported the coup. The Obama administration, with a State Department led by Hillary Clinton, firmly backed the right-wing coup, and obstructed any action to restore Honduras' democracy. (Though Clinton today lies about her substantial role in the putsch, and went so far as to excise evidence of this from her memoir.)

Today, Honduras has a violent, tyrannical and incredibly corrupt government. Renowned activists like Berta Cáceres are murdered in cold blood, and with complete impunity.

In 2014, the U.S.-backed Honduran regime became the murder capital of the world.

As of 2016, El Salvador has surpassed Honduras for this dubious honor. Together, the two U.S. allies have some of the world's highest homicide rates.

Not only are major U.S. corporate media outlets not calling for political intervention in these regimes, they are saying little while the U.S. government is deporting Central American refugees who are fleeing this violence. The Obama administration has, in violation of international law, deported asylum-seekers back to Central America, leading to the deaths of as many as 83.

Where are the calls for political intervention to stop these policies?

The Washington Post also cites corruption in Venezuela's government as a reason for intervention. Yet not only are many of Venezuela's Latin American neighbors tremendously unpopular; they are also incredibly corrupt. There aren't very many polls asking citizens what they think about these governments, however, because they are often so corrupt and draconian that it is difficult for such studies to be done.

As for Venezuela, on the other hand, the Carter Center says the country has had one of the best election processes in the world.

In Colombia and Mexico, meanwhile, it is not uncommon for labor organizers, left-wing activists and journalists to be kidnapped and killed. The drug violence that plagues much of the region is frequently linked to the governments.

Many of the the U.S.'s own allies in Latin America and throughout the world are significantly less popular than Maduro, but there are no calls for their ouster, because they have the great convenience of being ordained by Washington.

Still, all of this is, from the beginning, already predicated on a false notion. When the Washington Post insists "Venezuela is desperately in need of political intervention by its neighbors," it implies that such intervention is not already taking place.

The U.S., among others, has already been intervening in Venezuela — and in Latin America as a whole — for decades.

U.S. government documents show how Washington has done whatever it can to undermine Venezuela's democratically elected socialist government — up to and including literally overthrowing it.

As Salon has reported before, in April 2002, the U.S. backed a military coup that toppled President Hugo Chávez and instead installed right-wing businessman Pedro Carmona as leader.

Just 48 hours after the U.S. helped overthrow Venezuela's democracy, however, Venezuelans from poor and working-class neighborhoods filled the streets demanding that their elected president be returned to power. The masses won.

A week after the 2002 coup, the Guardian reported that the “failed coup in Venezuela was closely tied to senior officials in the U.S. government.”

The State Department later admitted, “it is clear that NED [National Endowment for Democracy], Department of Defense (DOD), and other U.S. assistance programs provided training, institution building, and other support to individuals and organizations understood to be actively involved in the brief ouster of the Chávez government.”

This is not all. The intervention has continued since then.

U.S. government documents released by WikiLeaks show how the U.S. Agency for International Development, or USAID, an ostensible foreign aid organization that often acts as an arm of the State Department, articulated a point-by-point plan for undermining Venezuela's democratically elected government.

While the Washington Post editorial board may think otherwise, the U.S. government has plainly admitted that "protecting vital U.S. business" is a more important political priority than respecting a foreign country's sovereign democracy.

Numerous other U.S. government cables detail just how thoroughly the U.S. has intervened and continues to intervene in Venezuela's sovereign government, backing opposition groups and more. Center for Economic and Policy Research analysts Alexander Main and Dan Beeton detail the substantial evidence in the book "The WikiLeaks Files: The World According to U.S. Empire​."

The truth is the U.S. has already intervened in Latin America for decades. And the results of its numerous interventions have been nothing short of catastrophic.

The U.S. has overthrown democratically elected left-wing governments that challenged the interests of Western multinational corporations, in Guatemala (1954), Chile (1973) and many more nations.

The U.S. has armed, funded and trained right-wing death squads in numerous countries, and continues to persistently back right-wing opposition groups.

The fact of the matter is the U.S. has long intervened in Venezuela and the rest of Latin America, and only continues to do so.

As for Venezuela's economic problems cited by the Washington Post, they are by no means unique. Venezuela relies very heavily on oil revenues, and the price of oil has fallen by more than 70 percent since June 2014.

Other countries with economies based on oil, like Saudi Arabia and Russia, have seen similar economic turmoil. Yet, again, where are the calls for the external political intervention in Saudi Arabia? (It may be hard for such a nation to be accused of unconstitutional malfeasance when it is a theocratic absolute monarchy.)

"Shops are empty of basic foods and medicines, and the government is within months of a foreign debt default," the Washington Post writes. "Severe water and electricity shortages have spread in recent weeks." (Though right-wing opposition groups in Venezuela have been called out for spreading propaganda photos of shortages in stores that were actually taken in New York.)

These same problems are exponentially worse in some allied U.S. countries, however — and also exist in impoverished areas of the U.S., which has its own chart-topping poverty and hunger rates.

Yes, Venezuela does have economic problems. So too does its neighbors — where the problems are even worse.

Yes, Venezuela does have crime problems. So too does its neighbors — where the problems are even worse.

All of this begs the question: Why is the U.S. so bent on undermining Venezuela?

Perhaps it could be the fact that Venezuela is a socialist government, one that is independent of U.S. control, one that has helped lead Global South opposition to hyper-militaristic U.S. foreign policy.

The U.S. has been equally persistent in its myriad attempts to overthrow Cuba's government, for similar reasons.

It also helps that Venezuela has the world's largest oil reserves, and is much closer to the U.S. than the Persian Gulf, making transport significantly easier.

U.S. news outlets frequently report on countries like Venezuela out of context. They do not compare apples and oranges — or, in the case of Venezuela, they do not speak of it in contrast to its Latin American neighbors.

These kinds of double standards may have come to be expected. After the death of Saudi absolute monarch Abdullah in January 2015, Glenn Greenwald pointed out how the U.S. media was significantly more gracious — and propagandistic — in its coverage than it was after the 2013 death of President Chávez, who was elected four times and was beloved by millions of Venezuelans.

These double standards, nevertheless, are by no means new. Noam Chomsky famously analyzed them in his canonical work "Manufacturing Consent: The Political Economy of the Mass Media."

In the U.S. media, “you’ll find quite a remarkable degree of civility and subordination to established power,” Chomsky said in a speech in 1989, just after the book was released.

Today, more than 25 years later, Chomsky's observations remain just as accurate. U.S. media reports on Venezuela are the epitome of the long-established tendency to kowtow to power.