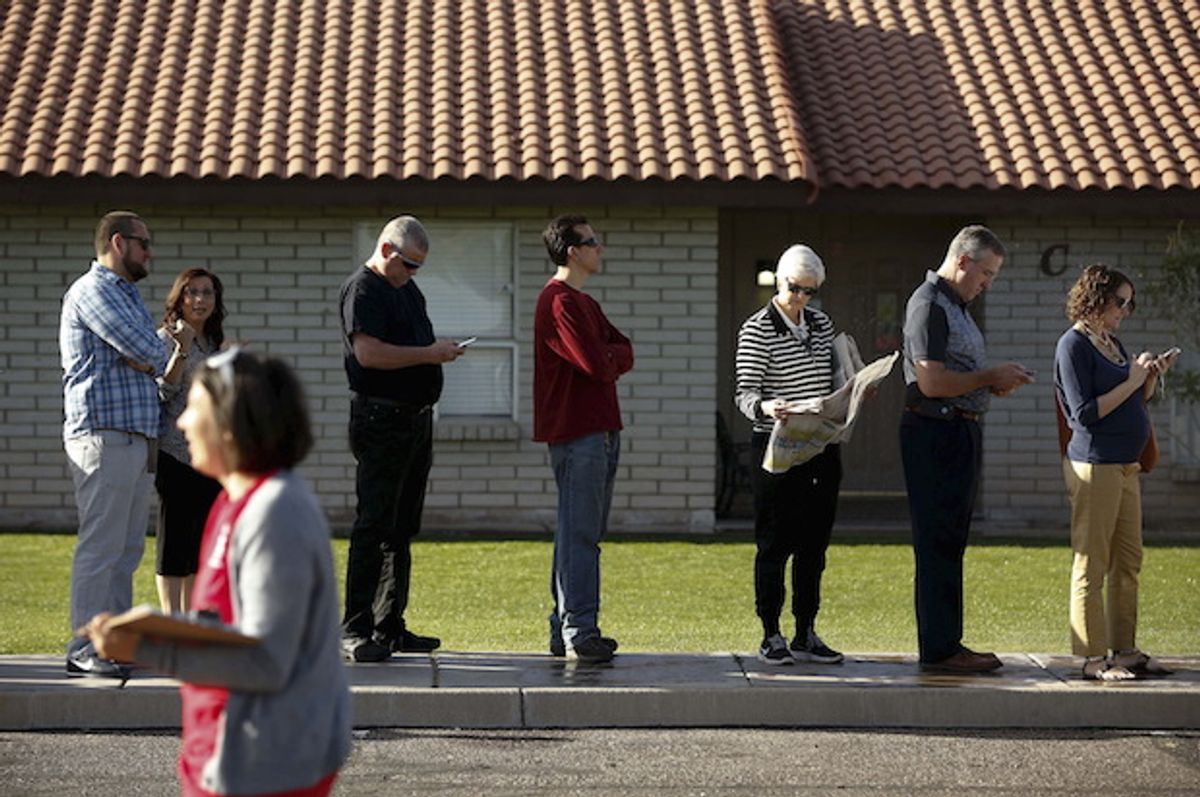 People wait to vote in the presidential primary election outside a polling site in Glendale, Arizona on March 22, 2016, after 70 percent of polling locations were cut (Reuters/Nancy Wiechec)
--

“In Phoenix, a majority-minority city, County officials allocated one polling location for every 108,000 residents," the city's mayor Greg Stanton wrote in a letter to the Department of Justice calling for an investigation into the Republican-led effort to slash costs at the expense of voters. Voters in Maricopa County waited in line for hours.

Now, according to a new report from the Washington Post, rival Hillary Clinton's campaign is organizing various Democratic groups to file a lawsuit against the state in federal court on Friday. Clinton campaign elections lawyer Marc Elias will reportedly file suit on behalf of several Arizonians as well as the Democratic National Committee, the Democratic Senatorial Campaign Committee and the Arizona Democratic Party in Phoenix's U.S. District Court.

Arizona’s “alarmingly inadequate number of voting centers resulted in severe, inexcusable burdens on voters county-wide, as well as the ultimate disenfranchisement of untold numbers of voters who were unable or unwilling to wait in intolerably long lines,” the lawsuit states.

“Arizona has a history of problems with guaranteeing the rights of their citizens to vote, and with this lawsuit we hope to stop it now in time for the 2016 general election,” Elias told the Post.

The lawsuit calls on the court to approve Maricopa County officials' polling location plans ahead of the general election in November to avoid the chaos from the primary election. It also calls for an end to onerous voting restrictions that have a “dramatic and disparate impact” on voters of color, who are disproportionately Democratic voters.

While Clinton's election lawyer is organizing the affected parties in the lawsuit, the Clinton campaign will not officially join the suit until after it is filed in court, according to the Post.

The Clinton campaign is also suing North Carolina, Wisconsin, Virginia and Ohio over voting irregularities during their primary elections.

Before the Supreme Court struck down the crucial pre-clearance component of the Voting Rights Act, Arizona’s election laws and practices had to be approved by the Justice Department, because of the state's racist history.