Texting at the movies is a terrible idea: Cinema chain determined to ruin the pleasure of going to the theater 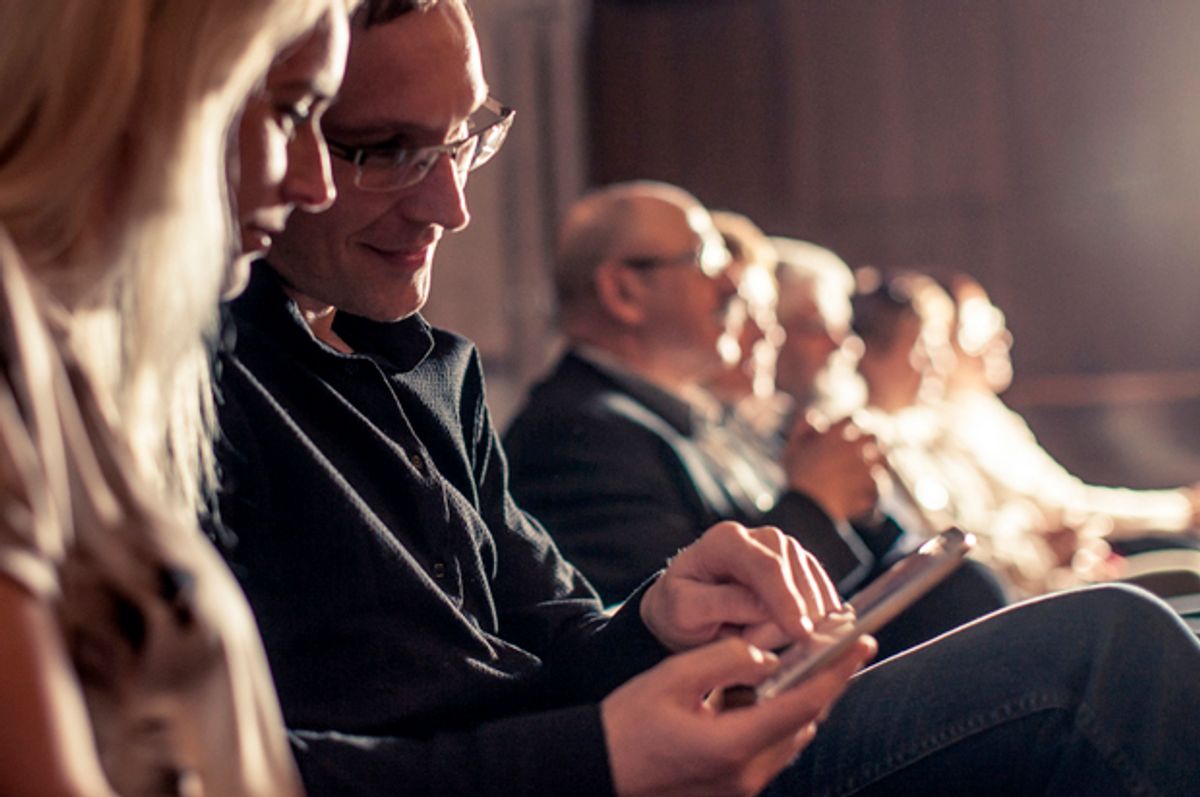 This was probably inevitable, but it’s still hard not to groan a little bit: The AMC cinema chain may allow – even encourage – texting in its theaters. AMC’s chief Adam Aron, who is improving the seats and the food in his cinemas, explained to Variety that he’s open to experimenting in other ways. He told reporter Brent Lang that “there does seem to be a consensus that there are pockets of consumers who do not see as many movies as other segments of the population and that we can be doing more to attract those people.”

So who on earth could he mean?

Would appealing to millennials involve allowing texting or cellphone use?

So I’ll try to resist letting any anti-millennial bias creep into my assessment here. Movie-going habits are bound to change, and Aron is right – it’s essential that theaters reach young audiences. There’s no need for a get-off-my-lawn moment here: Just as kids today play Minecraft instead of Atari, some of the 21st century’s changes are improvements. Beer is better than it used to be. So is television. Couldn’t making cinema-going more communal be a win for everyone?

But with large screens and amped-up sound systems in people’s living rooms, and movies viewable on cell phones, there are fewer and fewer reasons to drive to a cinema, buy a ticket, and pay for parking and popcorn. Why do it if there’s not some quiet and serene pleasure to sitting in the dark with other movie fans, and taking in the film, whether a slow German drama or “Star Wars: The Force Awakens?” If a film doesn’t hold your attention enough to keep you from texting a friend, maybe you should leave?

And with Sean Parker’s Screening Room likely to arrive and bring new movies to consumer’s homes, there will be even less reason to go to the theater unless they are places where viewers can really connect with a movie.

There’s also the thrill of bad-movie watching: It’s a rite of passage for teenagers to get together in their homes, watch movies together, and mock the goofy parts. It’s even more hilarious over social media. But why go to a theater if you want to send out snarky comments about every plot twist? Live-tweeting TV is fun, because it turns solitary viewing into a communal experience—but that's already built into an evening in the movie theater.

The good news is that Aron sees the problem of disturbing people who don’t want to see flashing iPhone lights or hear the sound of texts arriving as they watch a movie. He suggests that separate cinemas for millennials might make sense as a way to make everyone happy. (Maybe they can blast Justin Bieber and raffle off hoverboards? Sorry, I said I wouldn’t do that.) Once it comes into some theaters, though, it's likely to spread to others.

In any case, Aron's comment has already caused a backlash, with some people on social media talking about boycotting the chain and others about their fondness for the hardass old-school policies of the Alamo Drafthouse.

And AMC has started to send out reassuring Tweets:

Here’s the thing. Millenials are not the entitled jackals they’re sometimes made out to be. This is a generation, after all, that has been saddled with hefty student loans, stereotyped incessantly, and been the subject to even more generational think-pieces than Xers. And AMC’s Adam Aron, who floated this bad idea, is not a millennial himself, but a Boomer. So let’s not blame them for this bad idea.

But please, everyone – when the movie starts, please put your phones away. Constant texting is not nice for the people around you, it’s not a way to show respect for the filmmakers, and it’s not going to bring Fun. to play your parents’ basement.