The .1 percent are the true villains: What Americans don't understand about income inequality

"We are the 99 percent" makes a compelling slogan, but it elides who's really at fault for our stunning wealth gap 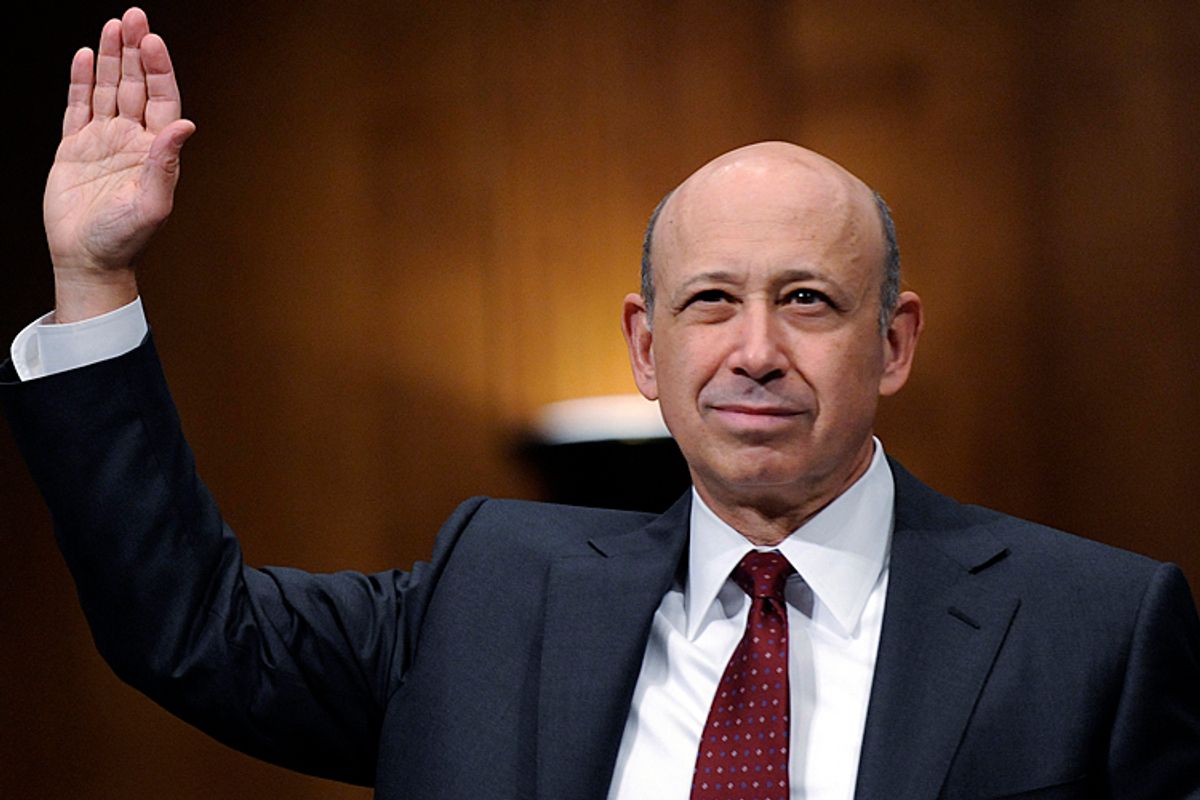 Lloyd Blankfein is sworn in to testify before the Senate Subcommittee on Investigations hearing on Wall Street investment banks and the financial crisis on Capitol Hill, April 27, 2010. (AP/Susan Walsh)
--

“We are the 99 percent” is a great slogan, but is it distracting our attention from a sinister reality? There’s strong evidence that it’s not the 1 percent you should worry about—it’s the 0.1 percent. That decimal point makes a big difference.

Over the last decade, a gigantic share of America’s income and wealth gains has flowed to this group, the wealthiest one out of 1,000 households. These are the wildly exotic and rapidly growing plants in our economic hothouse. Their habits and approaches to life are far divorced from the rest of us, and if we let them, they will soon cut off all our air and light.

The 99 percent would do well to find common ground with bulk of the 1 percent if we can, because we are going to need each other to tackle this mounting threat from above.

To make it into the 1 percent, you need to have, according to some estimates, at least about $350,000 a year in income, or around $8 million accumulated in wealth. At the lower end of the 1 percent spectrum, the “lower-uppers,” as they have been called, you’ll find people like successful doctors, accountants, engineers, lawyers, vice-presidents of companies, and well-paid media figures.

Plenty of these affluent people have enjoyed blessings from Lady Luck, but a lot of them work hard at their jobs and want to contribute to their communities in positive ways. In times past, these kinds of citizens served on the boards of museums and cultural institutions and were active and prominent figures in their towns and cities. But now they are getting shoved aside unceremoniously by the vastly richer Wall Street financiers and Silicon Valley tycoons above them.

Those at the lower end of the 1 percent have very nice houses and take exotic vacations, but they aren’t zipping to and fro in personal helicopters or cruising the high seas in megayachts. In exorbitantly expensive places like New York City and San Francisco, the lower-uppers may not even feel particularly rich. Most of them aren't really growing their share of wealth and plenty are worried about tumbling down the economic ladder. They have reason to worry.

Some lower-uppers are beginning to realize that their natural allies are not those above them on the economic ladder. They are getting the sense that the 0.1 percent is its own hyper-elite club, and lower-uppers are not invited to the party. The 0.1 percent has pulled away because at the tippy top, income has grown much faster than it has for the rest of the affluent.Unlike the lower-uppers, the super-rich folks are armed with every tax dodge in universe: they aren’t expected to pay nearly their share to Uncle Sam. Their income comes largely from capital gains, which are taxed at a far lower rate than income earned from working. As their money piles up higher and higher, their conspicuous consumption knows no bounds—they are building palatial homes and massive art collections and even gold-plated bunkers to protect themselves in case of an uprising. Many don’t really ever put down roots in communities; they roam from New York to London to Dubai to the Cayman Islands, following the favorability of weather and tax codes.

All told, the 0.1 percent now owns about as much wealth as the bottom 90 percent of America combined. And that’s just the official numbers. Plenty of their wealth is parked overseas and in places where it’s hard to get an accurate count of what they’ve accumulated. To get into the club, which comprises around 115,000 households, you need to start with a nest egg of $20 million—and that’s at the very bottom of the super-rich group. George W. Bush just barely makes the cut. He’s very rich, but not among the highest fliers in today’s second Gilded Age.

As you move on up the 0.1 percent ladder, you get folks like Steve Cohen, the hedge fund billionaire who bought a 14-foot shark in formaldehyde for his office, as if to signal his shady business practices (his previous firm, SAC Capital, was shut down by the feds for insider trading). Cohen doesn’t have just one mansion, he has lots of them. His $23 million principal home is in Greenwich, Connecticut, featuring an indoor basketball court, a glass-enclosed pool, a 6,700-square-foot ice skating rink with a Zamboni machine that smoothes the ice, a golf course and a private art museum. He also has five other homes just in the New York area alone.

People like Cohen are a big part of the undue concentration of wealth at the expense of workers and communities—they create little of value for society and siphon off funds for our schools and infrastructure with tax loopholes allowed by bought politicians, like the notorious “carried interest” loophole. You also get bankers CEOs like Jamie Dimon of JPMorgan Chase and corporate chieftains paid stratospheric salaries even while driving their companies into the ground, like erstwhile GOP presidential hopeful Carly Fiorina, formerly of Hewlett Packard.

It used to be that simply being a billionaire would get you into the Forbes 400 list—that was true up until 2006. No more. Our current herd of fatcats has blown past their Gilded Age counterparts to seize an even more gigantic share of the economic pie. According to the magazine, in 2014 you had to have $1.55 billion in the bank vault to make the list. That was $250 million more than in 2013. By 2015, you had to have even more: Carol Jenkins Barnett, whose wealth derives from Publix supermarkets, was too poor to make Forbes with her paltry $1.69 billion.

The hurdle continues to rise rapidly. By 2015, the wealthiest 20 people ownedmore wealth than half the American population. This group is where you’ll find Mark Zuckerberg of Facebook and Larry Page of Google, as well as the most successful financiers, like Warren Buffett and George Soros. But the ranks of the very top are no longer filled by mainly by entrepreneurs or even financiers who are self-made. Increasingly, they are populated by people who, thanks to several decades of regressive tax policy, have inherited their wealth; names like Walton and Koch have become common at the apex of wealth. This is the new hereditary aristocracy of means and power.

Figuring out exactly how the very richest spend politically is hard, but it’s obvious that big contributions from the 0.1 percent are sharply rising in importance. It used to be that these gazillionaires would make their donations and then simply pick up the phone and tell Congress what they wanted done—as Jamie Dimon did when he and other bankers wanted a key part of Dodd-Frank to be rolled back in 2014. They tend to get what they want (Dimon did), and above all, what they want is not to pay taxes or have their activities regulated. That’s why you will continue to hear politicians insist that the paltry amount you can expect in Social Security is too much and that “we can’t afford” to send kids to college without plunging them into debt peonage.

Inequality of income and wealth has fed back into the political process in dramatic fashion this political season. Tycoons like Donald Trump are abandoning their behind-the-scenes positions and stepping right onto the political stage. We may be entering a new phase of American politics where the 0.1 percent more regularly takes on the mantle of public servant to run the show directly, highlighting the brokenness of our system of democratic representation. Bernie Sanders, who has made political revolution focused on wresting control from billionaires as a central theme, is clearly focused on the power of the 0.1 percent. The revolution he calls for will not likely happen unless the 99 percent and the lower-uppers can appreciate their common ground and common threat.

Mike N., a North Carolina physician and entrepreneur, is a member of the 1 percent, but not in the 0.1 percent stratosphere. “Growing inequality is bad for everyone,” he wrote to me. “I do not believe that is sustainable.” He identifies with people who have a tough time making ends meet because he did this for most of his life before his career took off. He is concerned with serving the community through charitable work and political engagement, and he believes that “all should have the opportunity for things like education and healthcare.” Mike N. is the kind of person the 99 percent can work with.

Unless we act boldly—together—to reduce private concentrations of wealth, inequality will continue to grow and that 0.1 percent will continue to explode because the returns on their wealth exceed increases in salaries and income, as Thomas Piketty noted in his book, Capital in the Twenty-First Century. They can get wealthier and wealthier just by sitting there doing absolutely nothing. In fact, it would be better if they did just sit there and do nothing, because when they do something, it is often reckless speculation that destabilizes the economy. By seriously taxing our wealthiest households, we could raise significant revenues and invest these funds to expand wealth-building opportunities across the economy.

Until we are able to offer a challenge to the 0.1 percent, we will continue to see democracy undermined, social cohesion blown apart, economies destabilized, social mobility stalled, and many other important aspects of our personal and public lives degraded, including our health. We need the lower-uppers to construct a social and political movement big enough and powerful enough to do it.