The progressive movement is in the shadows: It's time to rally, protest and get in politicians' faces to become a force they can't ignore

2016 needs to be the year of reintroducing ourselves and our expectations to policymakers. 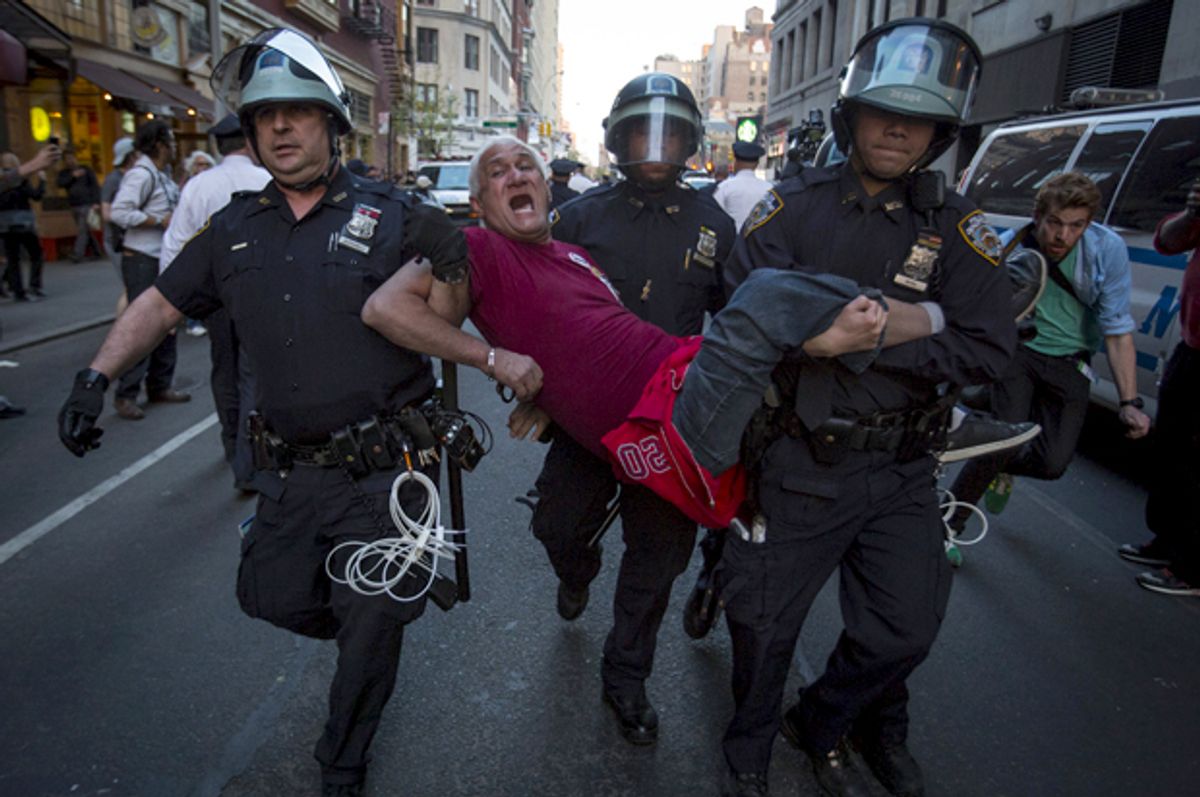 A protester is detained by New York police during a demonstration calling for social, economic and racial justice, in New York City, April 29, 2015. (Reuters/Andrew Kelly)
--

In my travels and conversations this year, I've been encouraged that grassroots people of all progressive stripes (populist, labor, liberal, environmental, women, civil libertarian, et al.) are well aware of the slipperiness of "victory" and want Washington to get it right this time. So over and over, Question No. 1 that I encounter is some variation of this: What should we do!?! How do we make Washington govern for all the people? What specific things can my group or I do now?

Thanks for asking. The first thing you can do to bring about change is show up. Think of showing up as a sort of civic action, where you get to choose something that fits your temperament, personal level of activism, available time and energy, etc. The point here is that every one of us can do something — and every bit helps.

Simply being there matters. While progressives have shown up for elections in winning numbers, our movement then tends to fade politely into the shadows, leaving public officials (even those we put in office) free to ignore us and capitulate to ever-present, ever-insistent corporate interests. No more. Grassroots progressives -- as individuals and through our groups -- must get in the face of power and stay there.

This doesn't require a trip to Washington, though it can. It can be done right where you live -- in personal meetings, on the phone, via email and letters, through social media (tweet at the twits!), on petitions, and any additional ways of communication that you and other creative people can invent. Hey, we're citizens, voters, constituents -- so we should not hesitate to request in-person appointments to chat with officials back home (these need not be confrontational), attend forums where they'll be (local hearings, town hall sessions, speeches, meet & greets, parades, ribbon-cuttings, receptions, etc). They generally post their public schedules on their websites. Go to their meetings, ask questions, or at least say hello, introduce yourself, and try to achieve this: MAKE THEM LEARN YOUR NAME.

OK, you're too busy to show up at all this stuff, but try one, then think of going to one every month or two. And you don't have to go alone -- get a family member, a couple of friends, a few members of the groups you're in to join you. Make it an excursion, rewarding yourselves with a nice glass of wine or a beer and some laughs afterward.

Then there are times ("in the course of human events," as Jefferson put it) when citizens have to come together in big numbers to protest, to insist on being heard. Lobbyists are able to meet with officials in quiet rooms, but when we're shut out, a higher form of patriotism demands that ordinary folks surround a public official's district office or a high-dollar fundraising event to deliver a noisy message about the people's needs.

This is especially necessary for officials who get a substantial or even majority vote from progressive constituencies... but still stiff us on such major needs as increasing the minimum wage, overturning Citizens United, endorsing a Robin Hood Tax on Wall Street speculators, and prohibiting the outrage of voter suppression. We have a right to expect them to respect our vote, and stand with us on the big issues. We've been too quiet, too indulgent with such office holders, and they won't change until we start confronting them publicly.

Both in terms of having your own say and in demonstrating the strength of the grassroots numbers behind the policy changes we want, you and I are going to have to get noisier, more demonstrative, more out-front in demanding that elected officials really pay heed to those who elected them. Let's make 2016 the year of reintroducing ourselves and our expectations to policymakers. At their every turn, we should be there, becoming a personal human presence (even an irritant) they cannot ignore.

To find out more about Jim Hightower, and read features by other Creators Syndicate writers and cartoonists, visit the Creators Web page at www.creators.com.