They won't stop until they get what they want: The GOP's Supreme Court blockade will go on for months — at any cost 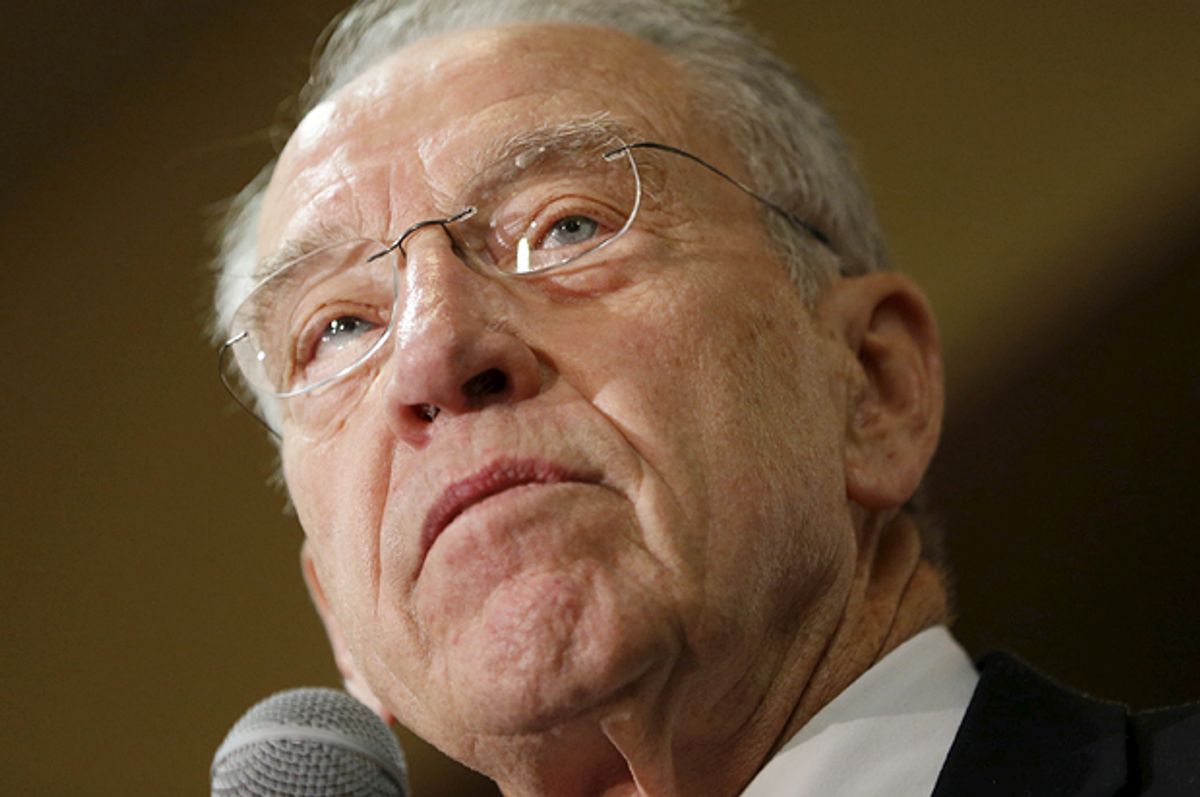 Republicans have potentially backed themselves into a corner in the ongoing obstructionist fight over the Supreme Court vacancy left by the late Antonin Scalia. The official position of Republican leaders in the Senate is that the timing of the vacancy, coming in the midst of the presidential primary, requires that the nomination be put off until the next administration takes office. The process will just be too politicized, they argue, if it happens in the middle of a presidential election. And it would be a crime, they say, to deny the American people a unique and precious opportunity to vote to decide the future of the Supreme Court.

Mitch McConnell and Chuck Grassley laid this argument out in a Washington Post op-ed in February:

The American people have a particular opportunity now to make their voice heard in the selection of Scalia’s successor as they participate in the process to select their next president — as they decide who they trust to both lead the country and nominate the next Supreme Court justice. How often does someone from Ashland, Ky., or Zearing, Iowa, get to have such impact?

We don’t think the American people should be robbed of this unique opportunity.

That’s all bullshit, of course. The “unique opportunity” they’re talking about happens regularly every four years – people go to the polls to vote for a president with the understanding that they’re voting for someone to nominate justices. What Republican leaders are really concerned about is losing the opportunity to have a Republican president nominate a justice to replace Scalia and restore the court’s conservative majority. The problem with the “let the people have a voice” obstructionist diversion is that voters might elect a Democrat in November, and then the Republicans would be stuck – if you say the people should decide, and the people choose a Democrat, then Republicans would be obligated to confirm the next Democratic president’s nominee, right?

Hah. No… The Huffington Post reported this week that Republicans are already making clear that they’re reserving the right to filibuster and obstruct whoever the next president nominates. So the fate of the Supreme Court rests in the hands of the people, and if the people make the wrong choice, the Republican Senate caucus will step in and do their best to make sure it doesn’t count. The conservative majority on the high court was a key component of the conservative policy agenda, and they’ll do just about anything to keep it from being lost in the long-term.

When you step back and take in the full scope of the Republican obstructionist argument, you really start to appreciate just how unlikely it is that the GOP would allow a Democratic nominee of any stripe to make it through to confirmation. Just in the last week, Grassley wrote another op-ed for the Des Moines Register laying out another excuse for inaction on a Supreme Court nominee: the court can function just fine without a full complement of nine justices. “The Supreme Court was established with only six justices,” Grassley wrote. “No one would call members of the first Congress that passed the Judiciary Act of 1789, like James Madison, or George Washington, who signed it into law, un-American.” They’re laying the groundwork for a long, long period of obstruction, and there’s no real reason to think they’d let up until they get what they want.

I see all this and I’m reminded of another very recent example of Republican judicial obstruction: the Senate GOP’s attempt to block President Obama from filling any of the vacancies on the DC Circuit Court. At the time, they deployed a number of very familiar sounding arguments for why obstruction was necessary. Republican senators argued that Obama was trying to “pack the court” to tip its ideological balance (he was actually nominating judges to fill vacancies). They made the case that the court could get along just fine without a full slate of judges. That was all nonsense that they ginned up to obscure the real reason for obstructing: they didn’t want the court to have a liberal majority. “The court is currently comprised of four active judges appointed by Republican presidents and four active judges appointed by Democrat presidents,” Grassley said in 2013 after filibustering two of Obama’s appointees. “There is no reason to upset the current makeup of the court, particularly when the reason for doing so appears to be ideologically driven.” They had no intention of letting up because they understood how critically important the court was to each side’s agenda.

The blockade only came down in late 2013 after Democrats in the lame-duck session of Congress took the drastic step of changing Senate rules so that lower court nominees could not be filibustered. And if the Democrats happen to win the presidency again in November, I won’t be surprised if they find that the only way to get a ninth Supreme Court justice through the Senate is to regain the majority and eliminate judicial filibusters altogether.