We now know that classified portions of the 9/11 Report revealed Saudi involvement. Yet we still support the regime 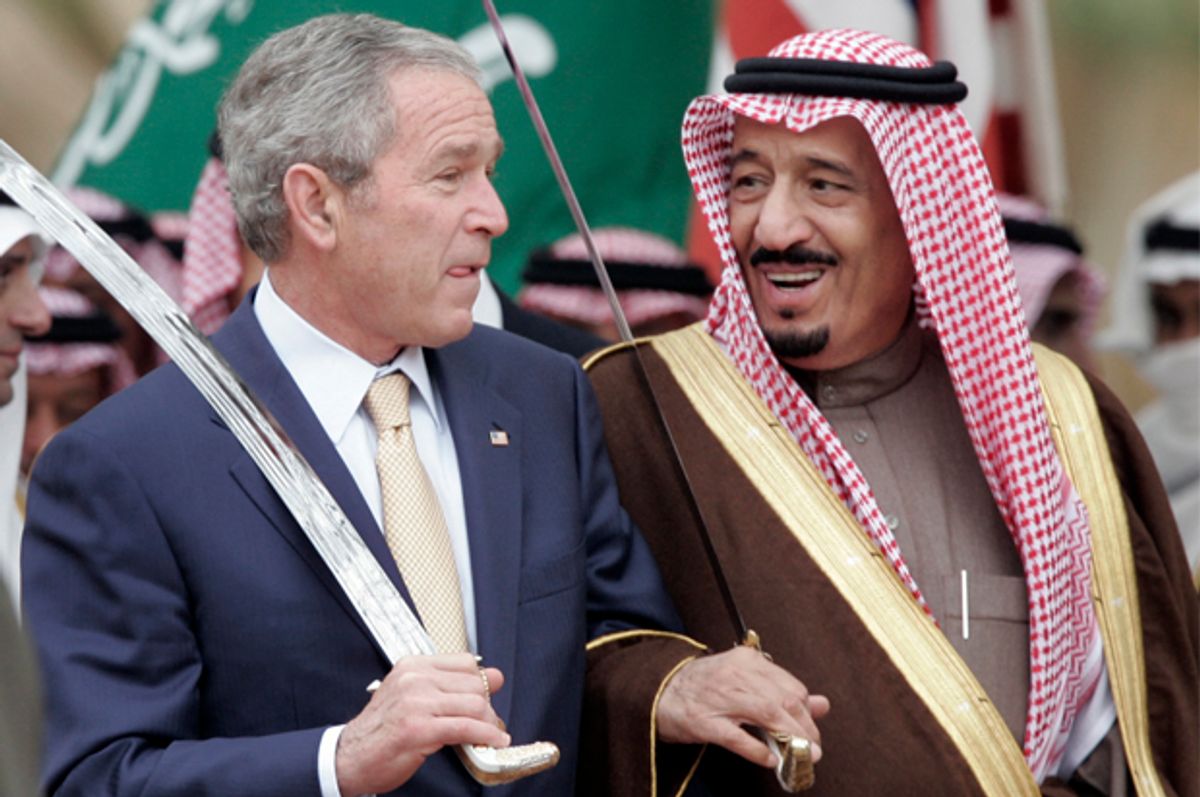 After 15 years, it's finally about to be okay to talk about Saudi Arabia's role in fostering anti-American terrorism.

On Sunday, a "60 Minutes" report newly refocused attention on 28 pages of the Joint Congressional Inquiry into the 9/11 attacks that have been censored since the report's release. The 28 pages describe evidence of Saudi involvement in the attacks, but when the Inquiry released their report, the Bush Administration censored those pages, citing national security. In interviews with a number of the men who served on the Joint Inquiry, the later 9/11 Commission, or both, "60 Minutes" described how a range of Saudis funded al Qaeda and, more importantly, how a known Saudi agent helped hijackers Nawaf al-Hazmi and Khalid al-Mihdhar settle in San Diego and start flight lessons.

The details presented in the "60 Minutes" piece aren't new. Former Senator Bob Graham, who led the effort to declassify these pages and appeared in Sunday's report, laid out some of the same details as well as details learned since, in a declaration last year supporting a lawsuit the families of victims have made against the Saudis.

Which raises the question of why we're seeing renewed attention on the 28 pages now.

The "60 Minutes" introduction may provide an explanation. It contrasts an upcoming Obama trip to Saudi Arabia "at a time of deep mistrust between the two allies, and lingering doubts about the Saudi commitment to fighting violent Islamic extremism" with the fact that the "White House and intelligence officials are reviewing whether to declassify one of the country's most sensitive documents." That is, it seems the threat of declassification is meant to apply pressure on the Saudis.

In its final moments, the "60 Minutes" piece returned to that theme of pressuring the Saudis with Tim Roemer -- a member of both 9/11 review committees -- noting that "I think we need a relationship with the Saudis where both countries are working together to fight against terrorism. And that's not always been the case."

So it seems that, 15 years after 9/11, we're finally going to openly discuss Saudi support -- perhaps even active involvement in -- terrorism. Or maybe just threaten to do so to coerce some kind of changes in the Kingdom's current behavior.

But there is no reason that discussion should remain with decades-old history. By all appearances the Saudis still seem to be fostering anti-American terrorism. That goes well beyond the export of extremist Wahabbism -- the ideology underlying much Sunni terrorism -- although that is a big problem. Even by exporting extremist culture, Saudi cultural networks may have a fairly direct tie with recent big terrorist attacks in Europe.

Then there's funding. At least until 2009, according to a WikiLeaks State Department cable, "donors in Saudi Arabia constitute the most significant source of funding to Sunni terrorist groups worldwide." That funding has continued in the years since, including funding for ISIS.

Finally, there are Saudi Arabia's military adventures throughout the Middle East that have had the effect of empowering Sunni terrorists, most obviously in Yemen. A recent Reuters story backed what Yemenis have been describing for some time: Al Qaeda in the Arabian Peninsula -- the terrorist organization that has been most successful in attempts to strike the U.S. -- has thrived as a result of Saudi Arabia's invasion of Yemen. AQAP "now openly rules a mini-state with a war chest swollen by an estimated $100 million in looted bank deposits and revenue from running the country’s third largest port." And some Yemenis go further, suggesting that, contrary to Reuters claim that this was an unintended consequence of a Saudi focus on Houthi rebels, AQAP's recent good fortune was very much intended -- and have even come with indirect U.S. support, as the U.S. provides assistance to the Saudis in that assault.

We're helping the terrorists who want to attack us grow stronger.

At some point, we need to take all the evidence of continued Saudi support for Sunni terrorism seriously. We need to admit we attacked the wrong country in invading Iraq, all the while claiming the double dealing Saudis are our closest allies in the War on Terror.

Sadly, this whole orchestrated move toward declassifying the 28 pages may well be a charade -- a threat to the Saudis designed to make them change their ways. At this point, after tolerating Saudi double dealing for so long, those 28 pages indict Americans just as badly as they indict the Saudis.