Why is Megyn Kelly berating Al Sharpton over Ferguson?: "Do you feel bad ... a man's life was ruined?"

Fox News' Megyn Kelly argues that the real victims in Ferguson and Baltimore are the police, not the deceased 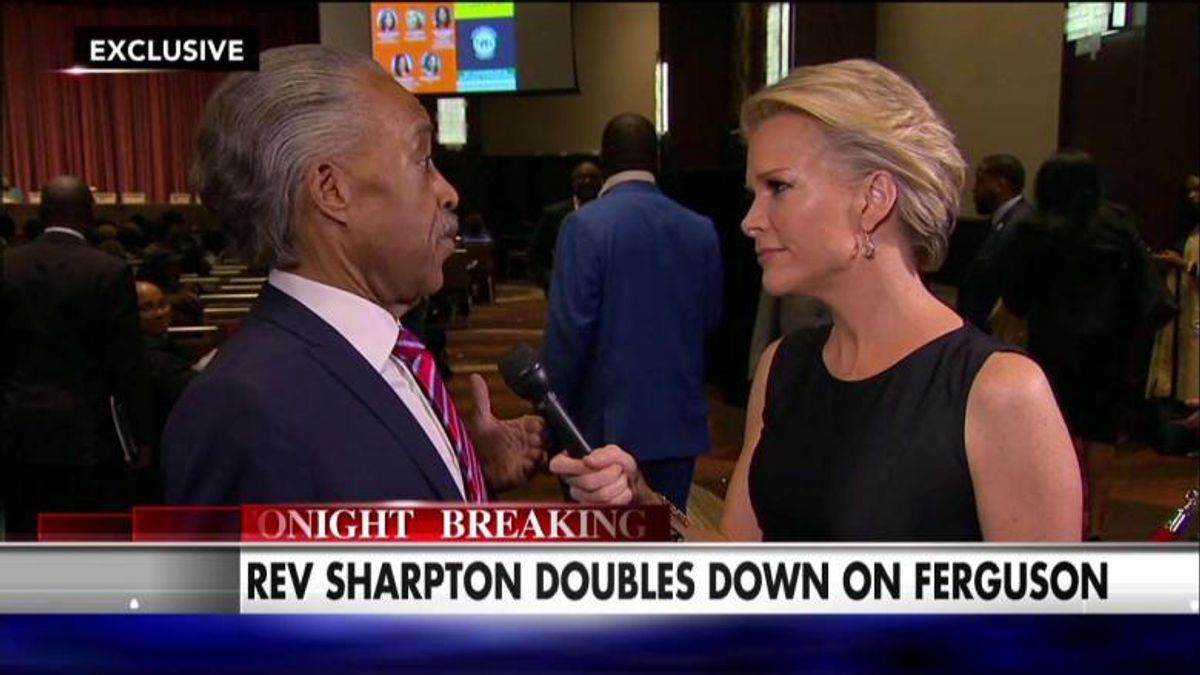 The Fox News anchor most famous for explosive exposes into the New Black Panthers and the true color of Santa Claus is for some unexplained reason still vehemently committed to discrediting the Ferguson protests.

Megyn Kelly went to MSNBC host Al Sharpton's National Action Network annual conference on Wednesday to get his thoughts on the 2016 race, before eventually pivoting to race relations under President Obama's tenure in office.

"What do you think of what is happening in this country right now with the Black Lives Matter movement and what king of impact do you think it will effect the 2016 race," Kelly asked Sharpton, before pressing him on a video showing protesters shouting, "Pigs in a blanket, let them fry!"

Sharpton swiftly condemned those statements, but then Kelly bizarrely brought up the case of Freddie Gray in Baltimore, asking Sharpton if he thought it was a "misstep" for the African-America prosecutor in the case to publicly announce her intentions to seek "justice for Freddie Gray."

"She said we need justice for Freddie Gray because Freddie Gray was the one who died. And justice could be whatever that leads to be, whether it ends up in with criminal convictions or not," Sharpton had to remind Kelly, a former prosecutor.

Kelly then went on to grill the outspoken activist on his role in the Ferguson protests following the shooting death of 18-year-old unarmed black teenager Michael Brown by former police officer Darren Wilson in 2014. Kelly has repeatedly hounded Sharpton on her Fox News show for recklessly fanning the flames in Ferguson.

“You came out publicly and said that it was not in self-defense, that there was no deadly threat to Officer Darren Wilson,” Kelly said, citing the Department of Justice’s investigation finding that there was no evidence to doubt Wilson’s claims that he feared for his life while encountering Brown. “Do you feel bad about what you said?” she pressed Sharpton.

"No," Sharpton replied, before the two delved into a lengthy back-and-forth about the details of the DOJ investigation into Wilson's actions. "I can say the DOJ said it was wrong but I said what I believed."

"So you think the DOJ had it wrong?" Megyn asked.

"I interpret it what I have heard about the DOJ differently than you did, but the issue that you're raising is whether I should apologize for believing something that several witnesses told me. I don't think you or me should apologize if we believe something that people told us. Now, if people didn't tell us that, that'd be different," Sharpton explained.

Curiously left out of this entire exchange is the more illuminating DOJ findings into the racist practices of the Ferguson police department and court system that served as the underlying grievance fueling the protests following Brown's death. But of course, when the Ferguson report was first released last year, Kelly shrugged off the systemic and rampant racism in the city's criminal justice system as merely a "case of bad apples."

Kelly's fixation with holding Sharpton accountable for what conservatives have decried as the myth of "Hands Up, Don't Shoot," or Baltimore State's Attorney Marilyn Mosby for daring to seek justice on behalf of a deceased constituent, only serves to expose her inability to act as an impartial arbiter of the truth, as she claimed to be during the Sharpton interview:

SHARPTON: you get on TV every night and state what you believe.

SHARPTON: Well, I do.

KELLY: I know because you are an opinion guy. I'm a journalist.