Half-truth Hillary finally exposed: This was the debate where Bernie Sanders changed the Democratic Party for good

On Syria, the minimum wage, fracking and more, this debate proved Sanders is the future and Clinton the past 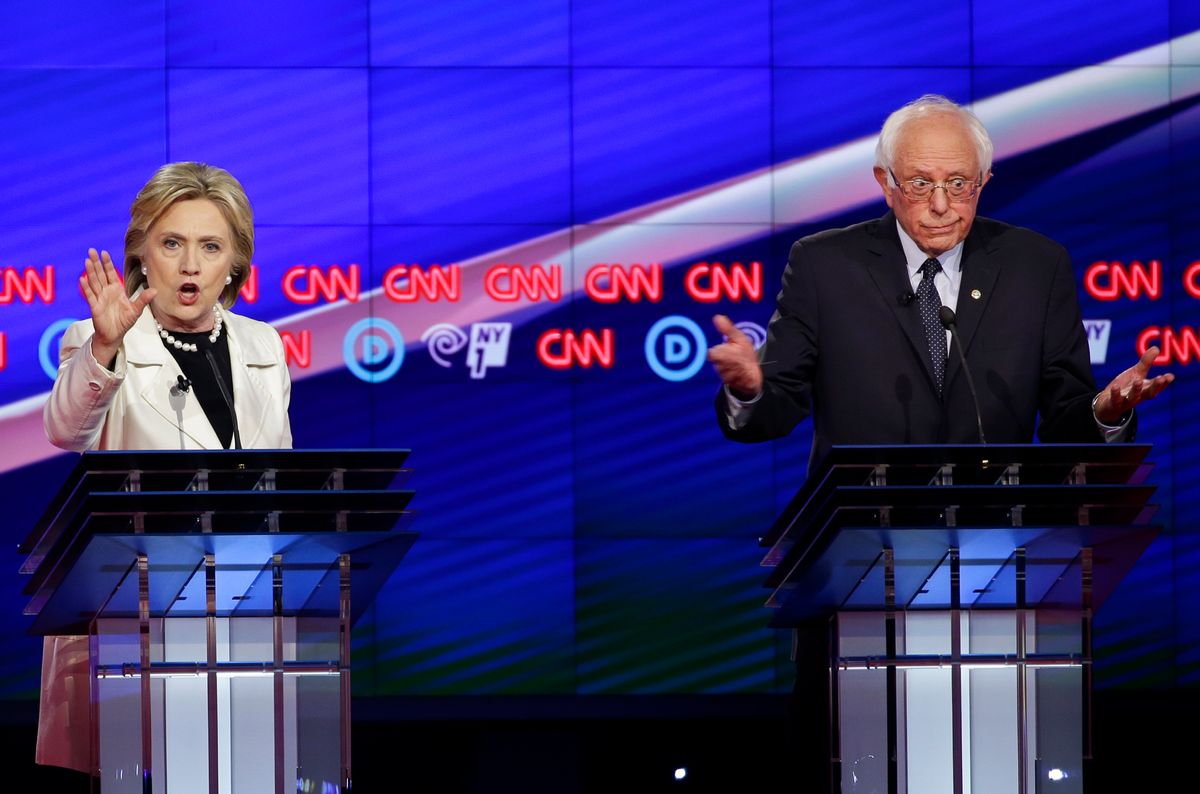 What always disappointed me the most about President Obama was how he never even tried to change the language of politics that had been established in the eight years of the Bush presidency.

From immigration (on which he never articulated a different rhetoric than the punitive law-and-order one put into effect by his predecessor) to civil liberties to war crimes to inequality to health care to race relations to trade, he has kept to the establishment line on all substantive policy issues.

And that’s where Bernie Sanders has succeeded so brilliantly. Sanders has managed to draw level with Hillary Clinton in the national polls, and seriously threatens to upset the carefully balanced apple cart if he can pull out a win in New York. As a result, he has pushed the establishment to acknowledge, at least rhetorically, the grievances of the powerless. That is no mean accomplishment, and he and his supporters should feel proud for having come this far.

I do not of course mean this in the dismissive way deployed by Clinton and the rest of the “establishment” (the term Sanders repeatedly uses to describe her and which irks her so much), to pat Sanders and his followers on the back, as if to say, Job well done, now go home and let the adults take over, you’ve had your chance at saying what you needed to say but now we need to get on with the job we were doing before. Indeed, toward the end of the debate tonight, as Clinton became increasingly nervous—her shrill bluster and bravado seemed to have collapsed by the end, as Sanders only seemed to gain in confidence and grit—that is precisely the rhetorical tactic Clinton used against him.

No, it’s not going to work now, things have changed, we have moved past the likes of Debbie Wasserman Schultz pushing the debates to ungodly weekend hours, pretending that there was never a split among liberals as severe as that among conservatives.

This debate was a sign of the distance Sanders has traveled in confidence and maturity, the way he handled all of her maddening lies—particularly about misusing his congressional voting record in the absurd way of political commercials—by insisting on the facts. The facts are all we need, but we have not been hearing them on such a visible platform in a long time, President Obama also being firmly in the mode of equivocating establishment-speak, which fuzzes up clear-cut issues of unequal treatment and distracts attention to pragmatism and “competence” (of course the neoliberal banker in a politician’s suit is the only one who’s competent).

It was a joy to witness the establishment standing denuded tonight. There were actually two other dignitaries—Bill Clinton and Barack Obama—who stood behind Hillary Clinton, on this night when the hypocrisies of the powerful stood exposed on the national stage. Using the kind of hardcore logic and rationality that went out of style after Walter Mondale’s unsuccessful deployment of the same against warm fuzzy Ronald Reagan, but which made a brief appearance when Joe Biden went head to head against Paul Ryan, Sanders didn’t let Clinton get away with her prevarication on a single point. And of course she equivocated and feinted right and left and diverted attention and raised false alarms in response to every single question.

Again and again, Clinton attempted to subdue every sharp query that came her way by speaking in praise of the incremental measures she intends to take toward what she has now taken to calling her own “bold” ideas, such as raising the minimum wage in steps by way of getting to the progressive goal of $15 an hour. She mocked the idea of free college by offering her father’s homely wisdom that one should “read the fine print” when something is offered for free. But Sanders never let her get away, and neither did the moderators, to their credit. In contrast to previous debates, certainly in recent election cycles, the debate remained firmly grounded in facts rather than distractions, fears, and absurd hypotheticals, which by itself is a notable shift in consciousness.

As the debate wore on, the contradictions in Clinton’s attempt to square the circle became more and more evident. Sanders had worn her down so greatly, with the gentlemanly demeanor she so clearly despises, that he had to do less and less work to expose her lies. He would simply shake his head, roll his eyes in disbelief, while Clinton seemed to dig ever deeper holes for herself.

In the name of incrementalist competence, she refused to answer whether she would support a tax on Wall Street speculative transactions (a pretty orthodox economic idea that has been around for a long time), couldn’t excuse her way out of support for fracking technology all over the world, refused to grant that Israel had used “disproportionate response” in response to any attacks, and couldn’t find a way to escape from her advocacy of escalated military responses in Libya and Syria.

She often fell back on 9/11 and her “response” to it, as a savior of New York. The adults are here to protect us, what does a wide-eyed socialist like Sanders, beholden to European values, even know about managing the economy? Dodd-Frank, that parody of a neoliberal law to save us from the next financial collapse, was Clinton’s only resort as the manager who pursues goals strictly through established law. Meanwhile, her absurd charges that Sanders is somehow a supporter of assault weapons or a lover of swaps and derivatives or a threat to Israel fell completely flat.

This has been the diversionary recourse for conservative Democrats for a long time now, but it is not going to work this time, regardless of the outcome of the Democratic nomination and the general election. The genie is well and truly out of the bottle. Sanders’s campaign—unlike, say, Jerry Brown’s humanist unorthodoxy in 1992—has gone on too long and scored too many points that have hurt the establishment deeply and irrevocably. This is what I gathered from this debate, where the energy—despite Clinton’s claims to New York as home turf—was ecstatically on Sanders’s side, particularly in his rousing closing statement.

Sanders has stayed on message, a simple one, the only one that matters, of economic inequality and specific unequivocal ways to address that. Like her predecessors, Clinton has sought to keep the debate focused on the culture wars; she did it again in her closing statement tonight, almost seeming to glide by economic inequality and instead talking about cultural “barriers” to opportunity, the distracting dance that neoliberals like to do at every opportunity. She would never have brought up a single substantive issue during this campaign, following the release of her vacuous self-affirmative opening campaign commercial, had Sanders not forced the issue. She is trying her damnedest to speak the progressive lingo for now, until Sanders is put away by the superdelegates or other shenanigans of machine politics at which both Clintons excel, but it doesn’t suit her and tonight it was glaringly obvious.

Neoliberalism, from this point on, will not have the cover it did before the Sanders campaign. Future progressive movements will have a firmer foothold to stand on. The fantasy that only neoliberal stalwarts have the competence to handle money and defense has been shattered. Just think, late last year, the question was how—and if—Sanders could get minorities to come over to his side. We are now talking about palpable shifts on every possible measure, and perhaps even the possibility of making his case at the convention. Even if he should fall short of that, the key idea progressives should take from his winning campaign is that the first and most important thing to do is to change the terms of discourse, because to speak in the other side’s language is to concede defeat.

It is not a coincidence that it often tends to be people of much earlier generations—like Ralph Nader and now Sanders—who bring out the youthfulness in the young. The facts, spoken by the mature and wise, have a way of rousing the listless. The facts, about our distorted policies, are back on the table. In response to why Sanders, at the Apollo theater, called out Bill Clinton for defending his wife against the use of the term “superpredators” in the 1990s, Sanders simply said, “Because it was a racist term, and everybody knew it was a racist term.” That is the kind of clear shift in discourse we’ve needed all along.