Standing by the sexist stereotype, might score votes but he's giving credence to ugly views of women 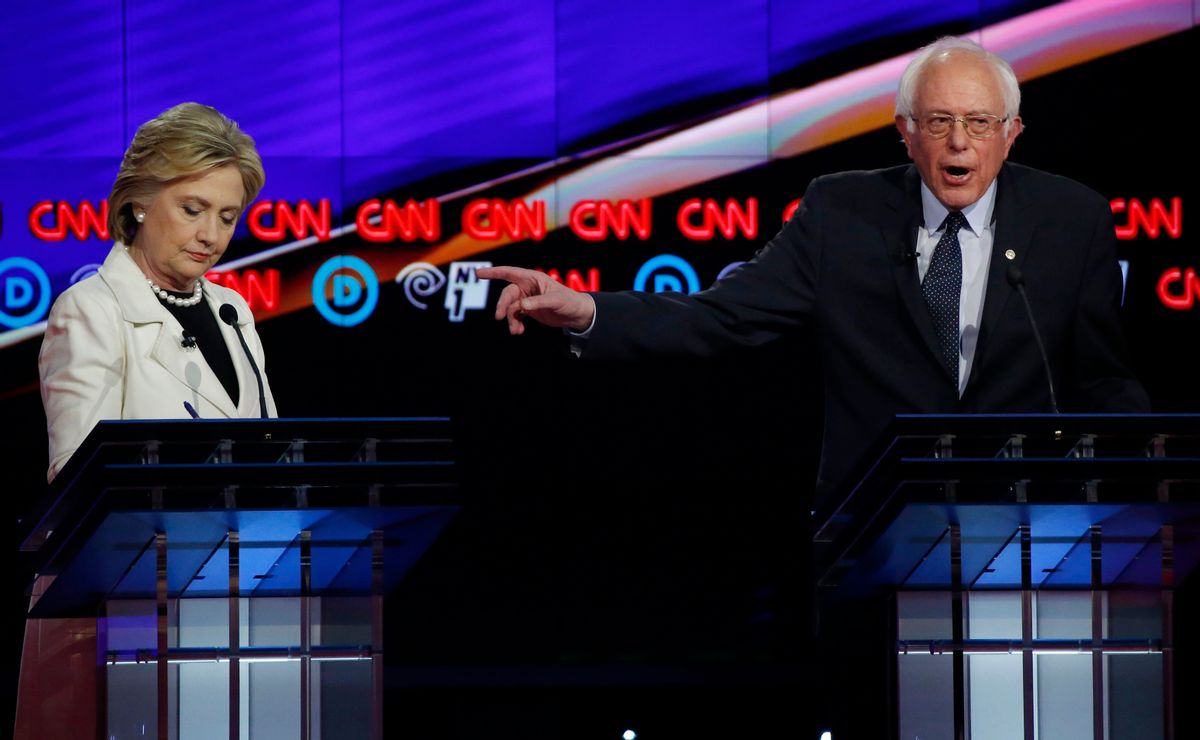 The question of whether or not Bernie Sanders has been questioning if Hillary Clinton is "qualified" to be president came up again during CNN's Democratic primary debate, hosted in Brooklyn, New York on Thursday night. It's been an issue since last week when Sanders, taking bait that Clinton herself refused, railed in a speech that Clinton is "not qualified" because of her vote authorizing President Bush to go to war and the fact that she has a well-funded super PAC.

The use of the term "not qualified" captured the public imagination because it sounded an awful lot like Sanders was sliding into the same sexism that many have witnessed in his most vocal online supporters, who have been nicknamed the "Bernie Bros" and are notorious in equal parts for denying that they are sexist while speaking to women as if they are small children who need everything carefully explained to them in one syllable words. (As a frequent target of said Bros, I maintain that they are a small and likely unrepresentative part of Sanders support.) A lot of people assumed he was straight up riffing on sexist assumptions that a woman can never be good enough, even if she has been both a senator and the secretary of state.

Sanders made it clear that he wasn't most certainly not resorting to inarguably sexist attacks on Clinton's intelligence.

"Does Secretary Clinton have the experience and intelligence to be president? Of course she does,” Sanders replied when asked about it. “But I do question her judgment.”

So, to be excruciatingly clear here, Sanders is not talking about Clinton like she's stupid. That said, that doesn't mean he's off the hook when it comes to whether or not this particular line of attack is sexist. There are ugly and unfair stereotypes used to discredit women besides assuming that they are blessed with less brainpower than men.

As I wrote about when this controversy first erupted, another common way to discredit women seeking power is to portray them as heartless harpies who are so consumed by ambition that they will step on anyone or destroy anything to get their way. Think Tracy Flick or any ball busting "career woman" in a shitty 80s comedy. Think the Evil Witch vs. Snow White. Or Ursula from "The Little Mermaid". Or Glenn Close's character in "Fatal Attraction".

These evil, ambitious women are held out as a morality tale about the dangers of allowing women too much power, much less actual equality. The implication is women can't handle it, and unless they are consigned to home and hearth, they will become so all-consumingly ambitious that they will rain destruction across the land.

It's much harder to deny that Sanders and his team are evoking the evil witch stereotype to demonize Clinton.

Jeff Weaver, Sander's campaign manager, outright said that Clinton is threatening to destroy "the Democratic Party to satisfy" her "ambitions to become president of the United States". That's the evil witch stereotype in a nutshell: Willing to destroy all that's good in the world satisfy their endless appetites for unfeminine things like power.

Sanders employs this stereotype with more subtlety, but his answer during the debate made it clear that he and his campaign are digging into to this narrative of Clinton as a woman so consumed with ambition that she throws all decency to win in order to pursue her single-minded goal of accumulating power.

To make it worse, Sanders's gambit that he's not questioning her experience or education, just her judgment, feeds into a nascent but extremely potent sexist stereotype that has emerged in our era: That women may be studious and hard-working, but they'll never quite reach the levels of native talent that men have.

It's a narrative that is invoked a lot to explain away how it is that women can go college and make better grades than men, but still somehow, when they get into the working world, they get paid less than men. Men are said to be bolder, craftier, more willing to take big risks or to do the creative thing, while those dowdy little A students keep dotting Is and crossing Ts but never really reaching the heights that their male colleagues can reach with the benefit of raw talent.

Plugging into these two narratives is gross, but smart politics for Sanders. Clinton is ambitious and she is wonky, more so than Sanders in the latter case. Turning your opponent's assets to liabilities is a classic campaign strategy. The quickest, dirtiest, possibly only way to achieve this with Clinton is to invoke these sexist stereotypes. (To be clear, Clinton herself isn't above these dirty politics, as anyone who remembers the '08 campaign will recall.)

But while it may score Sanders some more votes, the end result here is that that he'll probably still lose, and at the cost of validating, in supposedly liberal circles, some of the ugliest, most tedious stereotypes about women.