Mavis Staples sings out: "If Dr. King could see what's going on right now, he would be very disappointed"

Salon speaks to the great gospel and soul singer about her new album, race in America and going out with Bob Dylan 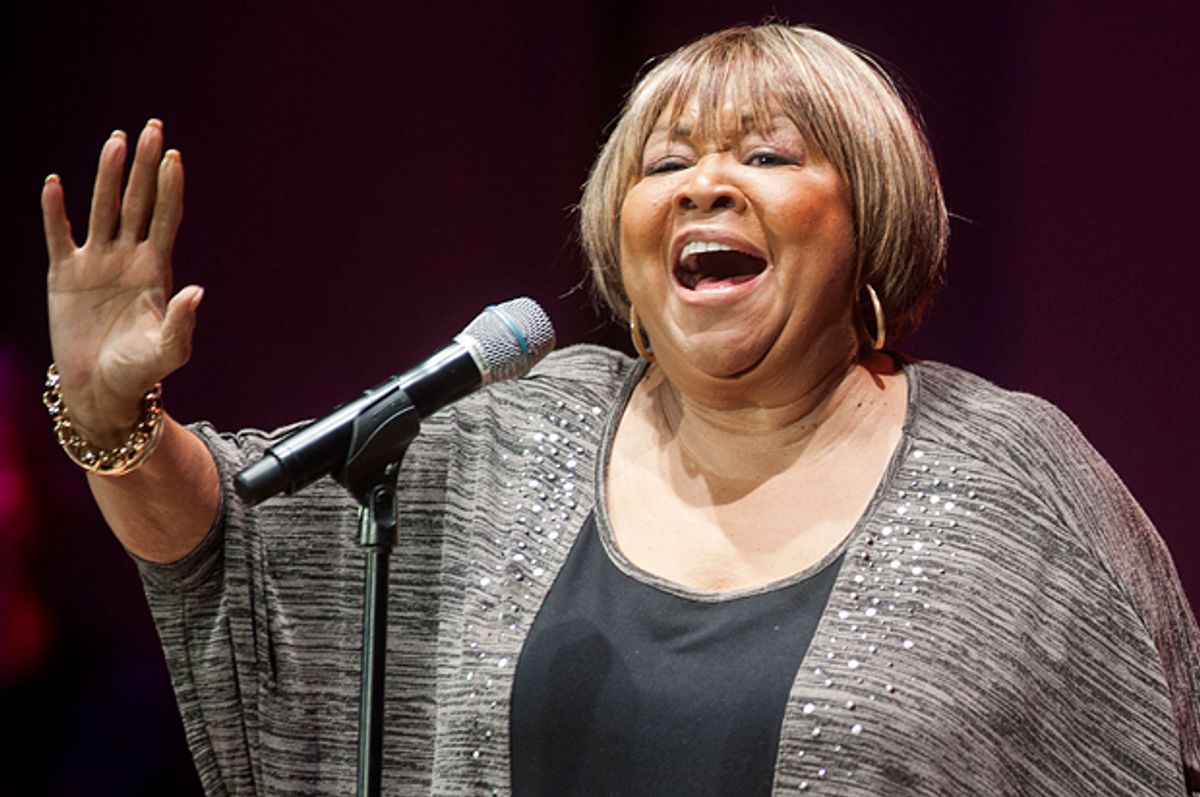 Mavis Staples is a rare ‘60s veteran whose music continues to grow and change in the 21st century. She was an important part of the Staples Singers, a group -- best known for “I’ll Take You There” and “Respect Yourself” -- that blended gospel with soul and blues and ended up providing some of the soundtrack for the Civil Rights movement.

Staples went solo in 1969, and over the last few years has seen her albums produced by Ry Cooder, Wilco’s Jeff Tweedy and M. Ward.

The last year has seen a lot of action for Staples. Her latest album, “Livin’ on a High Note,” makes a joyous noise and includes songs by Neko Case, Nick Cave and Bon Iver’s Justin Vernon. (Ward co-wrote a song about Martin Luther King.) Staples is the subject of a very fine new documentary called “Mavis!” and this weekend she performs at Coachella.

Salon spoke to Staples from her home in Chicago about the past, the present and her relationship with Bob Dylan. The interview has been lightly edited for clarity.

This record feels brighter and more optimistic than your last couple. Did you feel that making it?

It is. It's brighter. In fact, I've gone back to my earlier voices. The name of the CD is "Livin' on a High Note," so I figured I'd better change my key and go high. [Laughs] My voice on that record is mostly when I was singing with the family, songs like "I'll Take You There." It was just time for me to come on back up. But I enjoyed singing on a low too, because it's more relaxing.

What did M. Ward bring to this record as producer?

Kelly Hogan, the girl that sings with Neko Case, we were in a dressing room one evening and she was there, and I said, "I have a new producer, Matt Ward, and I don't know him." She said, "Oh, Mavis, you'll love Matt Ward. The only thing is, he's very shy." I said, "Well, Kelly, you know me. I can make anybody talk.”

She said, "OK, but you're gonna love him." [Laughs] And I do. I enjoyed working with Matt.

He brought some new songs. He wrote "MLK Song" and "Don't Cry." I like his way of producing; he leaves it to me until he hears something that should be done over. But he never heard anything. I'm the one who heard something that should have been done again and I told him. I said, "Matt, I've got to sing that song again." And he'd say, "Why, Mavis? Why do you want to do that?" I said, "Because I messed up, so I want to do it again. I think I can do it better." He said, "No, no, no." And I kept saying, "Listen, Matt, I don't want the song to go out like that." And he told Pierre, the engineer, "Pull up 'Action.'" When Pierre pulled it up, I listened and I had to apologize to Matt. I said, "I don't hear anything wrong." He said, "I told you there was nothing wrong, Mavis." I said, "OK, I'm done. No more disputing your words."

So we went on with it and practically every song was a first take. I love this CD, I love what Matt did with those horns. When a lot of other stuff was put into the album, I wasn't there. So when I heard the horns on "MLK Song" and on "Tomorrow," I said, "Oh, my God." And then he told me that Trombone Shorty blew his horn on "Tomorrow." He said, "Trombone Shorty says, 'Mavis is my girl. I'll play for Mavis.'" Well, that's great. I love this CD.

You've got a bunch of different songwriters on this album, like Neko Case and Nick Cave. What drew you to the songwriters you used?

But Neko, "History, Now," it's a great song. I just love it. I thanked her so much. I talked to everyone on the phone and told them what I was looking for in a song. When I heard this kid Pharrell [sing], "I'm so happy," I said, "Oh lord, why couldn't I get that song." Because that song just lifted me and made my heart happy. I said, "That's the kind of song I want to sing." Make the world happy. I've been making people cry for so long, so I want to get some smiles. I want people to wake up in the morning and have a reason to get up and go and raise the window and start speaking to your neighbors. We need to get back to that, you know? It's such a messed up world right now. Oh man, I hate to watch the news.

The Staple Singers was about music but also about civil rights and people coming together and racial harmony. Do you feel like things have moved forward? Where do we seem to be now as far as the things you were singing about in the sixties?

Oh, man. We had reached a point where I was very happy. It felt like we were on our way. We were carrying out Dr. King's plan. But right now I feel we're going backwards. It's just too much crime, too much killing, too much fighting. When you see these people at Trump's meetings and they're fighting, it's been riots. Some of the black kids getting killed and they want to blame everybody and then they want to riot. Sometimes I still think I'm living in the sixties. I don't see it going forward at all now. It's made a turnabout. Things were going good for awhile. I said, "Oh, this is good, Dr. King would like this." But if Dr. King could see what's going on right now, he would be very disappointed.

You're touring now with Bob Dylan, whom you've known for a long time. You two used to go out in the sixties, right?

Yes, we did. Bobby and I ... [Laughs] I might as well tell it now, everybody's on to it. We courted back in the sixties. We met in 1961 in New York. We did a General Electric television show together. In fact, there were a lot of us, there was The Brothers Four and Bobby and several other people on the show. We were standing outside, my family and Bob and his manager, and his manager said, "Bob, I want you to meet the Staple Singers." He said, "Oh, I know the Staples; I've listened to the Staples since I was twelve years old."

He said, "Pops, you have a smooth, velvety voice. But Mavis, she gets rough sometimes." I said, "What do you mean, I get rough?" But I knew what he meant. He meant when I do my squall, you know. He even quoted a verse out of one of our songs.

So, later on that day is when Bobby made his announcement: "Pops, I want to marry Mavis." [Laughs] And Pops said, "Man, don't tell me, tell Mavis." So I didn't think anything of it. I didn't realize he was for real until we met up at Newport later that year. When we met up at Newport he made himself very clear: "Mavis, I love you. Can we go to lunch?" I said, "Yeah, we can go." I figure I'm out there on the road in Newport with my sisters and I was safe, all the flower children were around us. But I was at an age where I had boyfriends, I think I was 19, but he was serious about getting married. I had to tell him, "Bobby, I'm too young to get married."

Do you ever wish you had said yes?

I thought about that. I don't wish I had said yes, but I wonder about what it would have been had I said yes, and had we gotten married and had some little crumb crushers, some little Bobbies and little Mavises. [Laughs] We probably would've had us a million-selling group, right now.

You've been on the road for decades now. Do you ever feel like you've achieved enough and you're ready to sit at home and relax?

It's just about now I've started thinking that. I'm really up in age. But I just make a u-turn and change my mind, because it doesn't bother me and I'm happiest when I'm singing. I'm happiest when I'm on the road with the band. If I sit here at home, I'd just be a pitiful person. All I would be able to do is sit here and watch TV. I can't get any other kind of job now. I would love to stay home, though, with my sister Yvonne, who is not well. I love being home with her, but I have really good caregivers for her and I'm over there every day that I'm home. But I really threw that retiring thing right out of my mind. I can see myself slowing down, not taking as many concerts as I do. I really work all year.

But it seems like the singing keeps you going and makes you strong and happy.

It really does. If I wasn't singing, what would I be? I'm happiest when I'm onstage singing to the people and meeting different people. I'm not thinking about retiring at all. I really didn't think I would be making another record. After my second Tweedy CD, I thought that was it for me. But Andy [Kaulkin of the label Anti-], he said, "Mavis, think about what you want to do for your next CD." I said, "My next one?" He said, "Yeah!"

I was so happy, because I didn't think that Andy was going to let me do another CD. I know I'm not selling that many records and I hate for the company to keep spending their money on me, but he loved Pops, he loved the family, and he just won't quit either. He's gonna call me and tell me, "OK, Mavis, think about what you want to do for your next CD." And don't think I haven't been thinking already. So when he calls me and asks me that, I'm gonna be ready to let him know.