Paul Ryan is very bad at his job: Now that he's bowed out of 2016, he's back to letting extremists hold Congress hostage 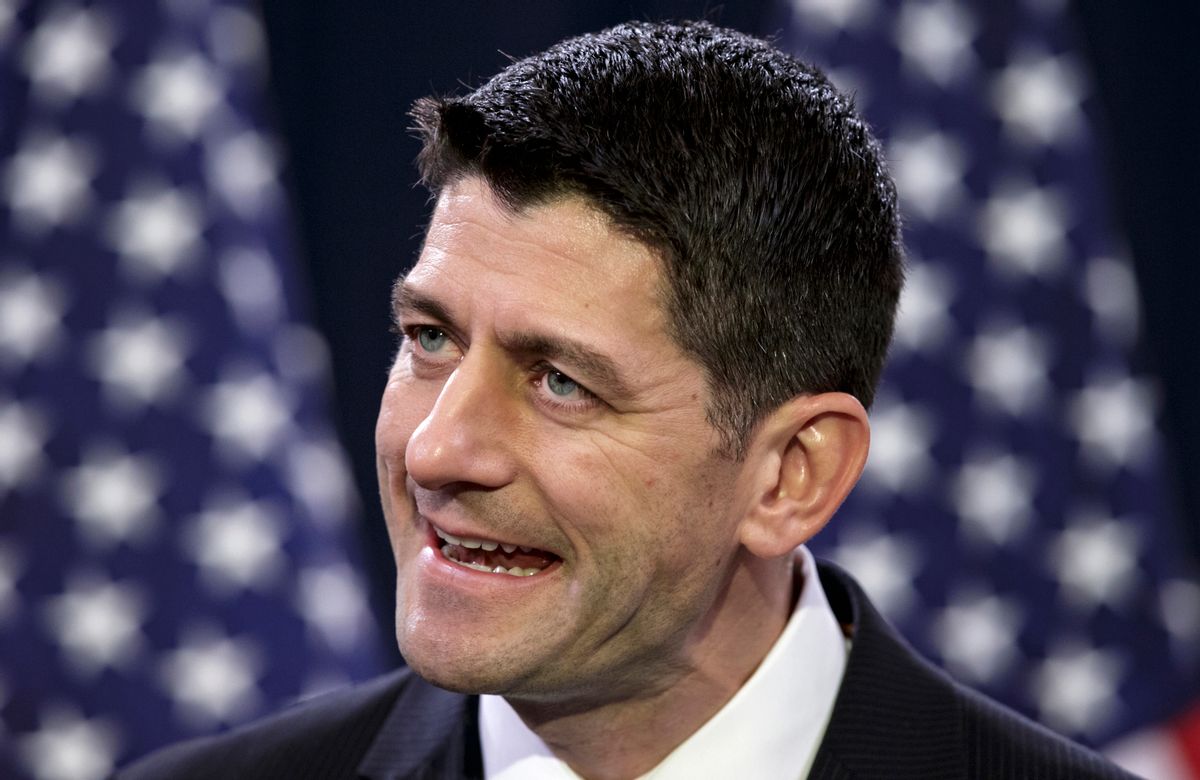 Barring some unforeseen miracle, today the House of Representatives will miss a legally mandated deadline to pass a budget resolution for the fiscal year 2017. It is yet one more remarkably unproductive day in a Congress full of people who won’t successfully work a doorknob if they think there is a chance someone will primary them for doing so.

Sure, the budget resolution is a procedural rule, and therefore mostly symbolic. It does not go to the president for a signature. There are no legal consequences for missing this deadline. Congress has only passed eight budget resolutions in the last 17 yearly budget cycles and government keeps ticking along, mostly.

Broadly speaking, the purpose of these resolutions is to set budget allocations and spending floors for various government departments and functions – national security, housing, federal law enforcement, Paul Ryan’s hair pomade, what have you. Later on, after budget resolutions between the House and Senate have been reconciled and the reconciled versions passed by both chambers, the appropriations committees start writing the actual bills that allocate funding to various government departments.

The major purpose of budget resolutions, from a public-relations point of view, is to signal spending priorities of the House and Senate to voters. And these days, since anyone who has been paying even a little bit of attention knows instinctively what those priorities are -- Democrats: We guess we can live with austerity; Republicans: Cut spending for everything except anything that might upset the old people who vote for us -- it might seem as if criticizing the House for missing this deadline is worth a resounding “meh.”

Which, along with the hair pomade joke above, brings us to Paul Ryan.

The main reason Ryan cannot pass a budget resolution comes down to four words: The House Freedom Caucus. The HFC is the group of 40 or so far-right windbags that basically pushed John Boehner out of the Speaker of the House job last fall and would have installed a goober like Louie Gohmert as his replacement if they could have. They compromised with the rest of the GOP caucus to elevate Ryan, though not without a lot of grumbling about how they still better get their way, or else.

Since then, thanks in part to low expectations by the public, distractions like the presidential election, and cover like the media’s bizarre fixation on portraying Ryan as some sort of gentle, family-oriented role model and not a soulless, ambitious hack, few people outside of Washington seem to have noticed that his leadership of the House has been nearly as worthless as Boehner’s. His big accomplishment was passing an Obamacare repeal bill, something Boehner also managed to do, by my rough estimate, eleventy billion times.

But his ascension to the Speaker’s chair was accompanied by much joy from Republicans who claimed he was the only entity who could unite their caucus (probably because they never considered Ba’al as a viable alternative). All the raucousness of the Boehner era? The funding of the government through hastily written supplemental bills instead of budget bills passed through regular order? The missed debt-ceiling deadlines that almost blew up the world’s financial systems? That was all in the past. Paul Ryan, failed vice-presidential candidate and Ayn Rand acolyte, cares about helping the poor and good governance. Hey girl, relax, you can trust him!

Of course it was all a line, but like when watching a good movie, you had to suspend your disbelief. Otherwise, you'd start to notice how it presumed good faith not just on Ryan’s part – always a dicey proposition – but also some sort of radical change in the makeup of the House, particularly the HFC.

Instead, the hard right is up to the same old garbage, and the new Speaker still seemingly has no way of bringing them in line. So when Ryan put together a budget framework last month – a step on the road to passing the resolution due today – the HFC made it known they would oppose it unless he added another $30 billion in cuts. Since Obama-era compromises have already sliced budgets for discretionary spending down to the bone, and since the likes of Gohmert et al. seem incapable of recognizing that there are 400 other members of the House who might also have some priorities, there isn’t really another $30 billion to cut. And even if there were, Ryan wouldn’t be able to get the rest of the GOP caucus to go along with them.

It hasn’t helped that some in the GOP have openly flirted with the fantasy of Ryan getting drafted as a compromise presidential campaign in a brokered convention this summer. The Speaker himself has said emphatically that he does not want the gig. But then, he was pretty emphatic about not wanting the Speaker job last fall, right up to the moment he negotiated his way into it. Even if he wasn’t producing what looks for all the world like a campaign ad and giving major speeches about the state of governance in America, it would be impossible to take his denials at face value. Or not to ask if he’s too busy staring longingly down Pennsylvania Avenue towards the White House to focus on his current job.

It is all somewhat academic at this point, since failing to pass a budget resolution won’t bring the government to a screeching halt. But what about down the road, when there is something earth-shaking at stake – say, another debt-ceiling raise – and the House is led by a Speaker who has failed to assert any authority over the hard right wing of his caucus, which might think it’s dealing with an ambitious smoothie who already has his eye on a big job elsewhere anyway, and is just waiting for the right conditions to let the inexorable forces of his party carry him to it? Why would the HFC have anything to do with what it considers a bad deal then?

Basically, we are all still stuck in the era of seat-of-your-pants governance at the federal level. Without either a lot of luck or better leaders than Paul Ryan, we’re not getting out of it in the foreseeable future.