That was the most vicious debate yet: Inside Hillary & Bernie's knock-down, drag-out battle for the New York primary 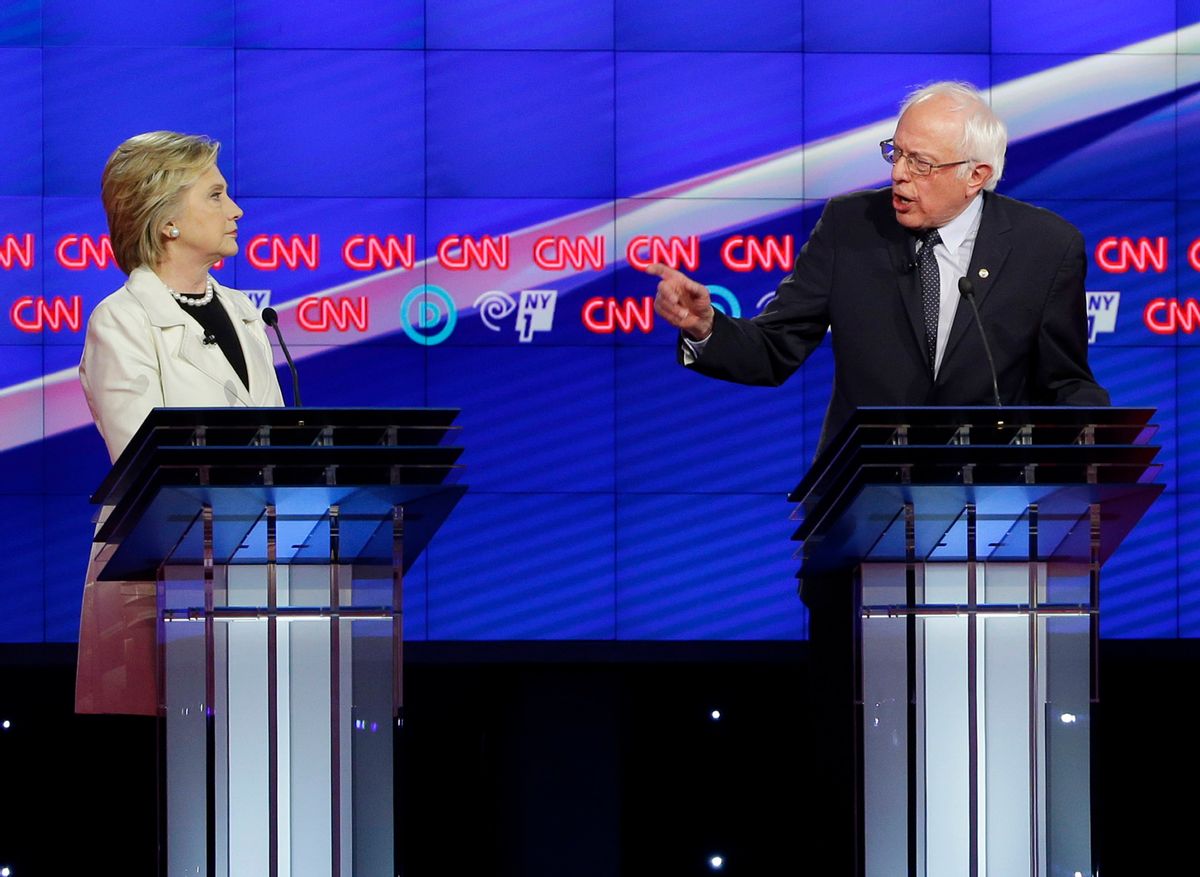 So, here we go again. Hillary Clinton and Bernie Sanders, debating. Where have we seen that before?

Thursday actually marked the ninth time that the two Democratic presidential contenders have faced each other. This time, they met before a raucous crowd in Brooklyn, where, to constant cheering and booing, Clinton and Sanders tore through perhaps their loudest, most freewheeling debate yet. The CNN moderators kept looking on helplessly as first Sanders and then Clinton would brazenly ignore the attempts to get them to stop talking. These two wanted to go at each other.

(Clinton also got in a nifty bit of press criticism when she rightly noted the shameful lack of attention paid in these debates to the subject of abortion. CNN's crew acted like she hadn't said a word.)

Still, whatever rowdiness there was couldn't mask the fact that a large portion of the debate was a retread. That's what happens in the ninth round. The general divide between the two—Clinton the more rightward incrementalist, Sanders the more leftward social democrat—was established a long, long time ago. By this point, you could shout some of the lines back to the screen.

But it's that familiarity that made Sanders' shakiness early on so strange. The first part of the debate centered on Clinton's Wall Street ties—prime Sanders territory. He has had more than enough time to get ready for such a conversation. Yet he flubbed the key question about the issue—namely, whether there's a concrete example of Clinton being swayed by Wall Street on a major policy question. There is a concrete example, in fact, and it's found in a devastating, and, importantly, very famous video featuring none other than Elizabeth Warren, who explained in detail the way that Clinton flipped on a big piece of financial legislation in order to appease Wall Street. Sanders didn't bring it up. If the shoe was on the other foot, you can bet Clinton would have. She does her homework. That's what she did with Sanders around guns, when she cited everything from a 1990 congressional race to a passage in a book he'd written to paint him as in the pocket of the NRA. Sanders howled in protest, but he didn't have a very good response. Clinton knocked him back on his heels.

Eventually, though, Sanders hit on a strategy that worked over and over again: He started acting like a hectoring journalist, repeatedly pointing out Clinton's garbled answers on issues ranging from the minimum wage—where she got completely tied up in knots about whether or not she supported the Fight for $15 movement—to Social Security to climate change.

The most extraordinary part of the night, however, came when the debate shifted to a discussion about Israel and Palestine. This is usually a dispute-free zone in American politics: everyone, on both sides of the aisle, fights about who can pledge fealty to Israel more fervently. Sanders, though, has suddenly morphed from a candidate who seemed not to want to be caught dead talking about the issue to one who actually managed to win an exchange about it in a debate in New York City—and to win it from Clinton's left. He asked Clinton, over and over again, why she hadn't mentioned Palestinians during a recent speech before AIPAC. He said that Palestinians should be treated with dignity and respect. He called Israel's invasion of Gaza in 2014 "disproportionate." Clinton gave perhaps her most passionately hawkish replies of the night in response to all of this.

The fact that such relatively mild statements could be seen as some sort of major disturbance in the Force is a testament to the lopsided terms of the Israel-Palestine debate in both American politics and the American media. But a disturbance it certainly was. Watching it, you felt a combination of astonishment that there was an actual, real debate happening about Israel in a presidential contest, and the inexorable sense that you might be witnessing a bit of a shift in our discourse around the subject. Whether or not that's actually true remains to be seen, but it was quite something to witness.

Issues are one thing. Votes are another. Clinton currently has a healthy lead in New York. Will the debate change the outcome in the primary? We'll just have to wait until Tuesday to find out.