Trump's amazing incompetence: With some of Rubio's delegates up for grabs, the GOP's extremely lucky Trump doesn't care about organization

If Trump ends up losing the nomination, it'll be because he couldn't be bothered with the minutiae of campaigning 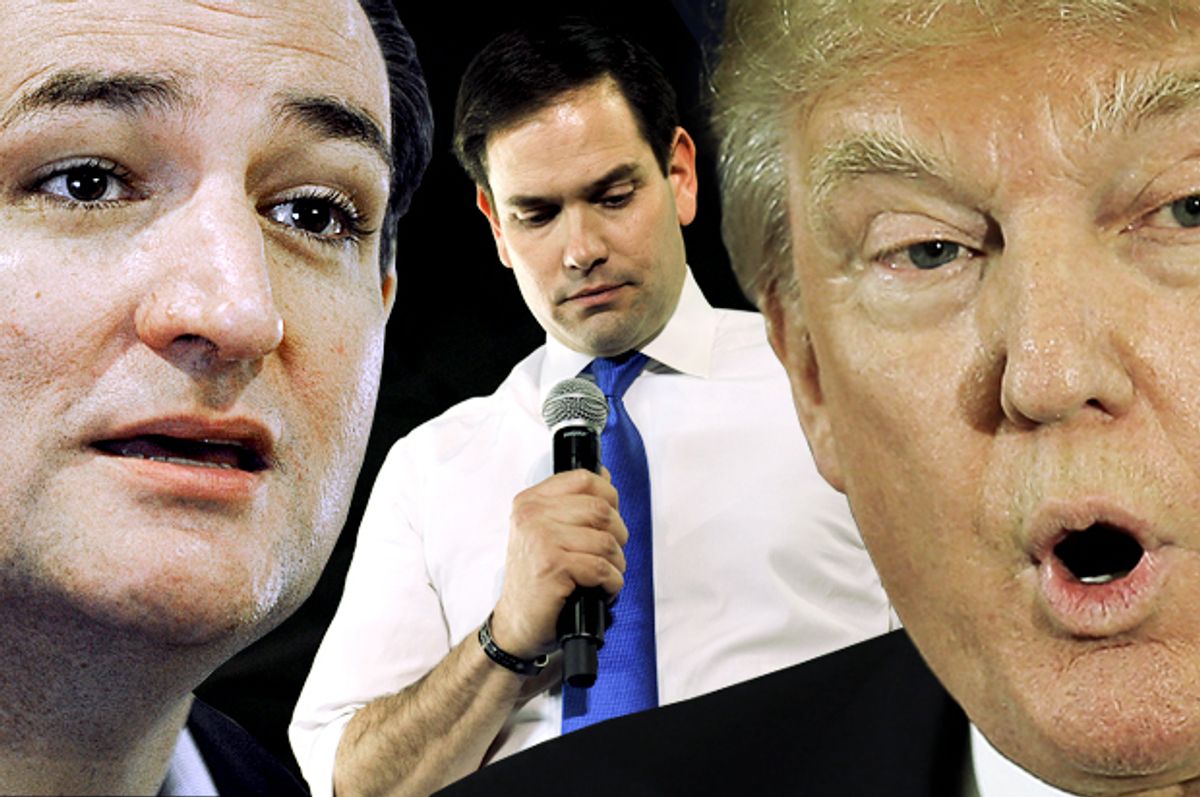 Ever since Florida senator and serial moment-haver Marco Rubio quit the 2016 presidential race, people have been wondering what exactly the ambitious Republican is going to do next. He’s not running for reelection to the Senate – even if he had wanted to, the thumping he took in the Florida primary would have cured him of that ambition – but he pretty clearly has designs on staying politically relevant in some capacity.

To that end, Rubio has been making a determined effort to maintain control over the delegates to the nominating convention he won as a candidate. (Rubio currently has the third most delegates among all active and former candidates, which means that in the current three-way race for the nomination, John Kasich is running fourth.) He’s sending requests to relevant officials in state parties asking that his delegates remain bound to him through to the convention, even though he’s no longer running for the White House. Rubio wants to be a key player in the event that the nomination comes down to multiple votes on the convention floor.

But as NBC’s Ari Melber reported this week, Rubio’s strategy is faltering. A number of states have rules stating that delegates who are bound to a candidate who drops out are free to support another candidate. And, as Melber points out, in a lot of these instances we’re not talking about actual people, but rather delegate slots that are still waiting to be filled: “The icing on the cake for Rubio's rivals is that most of his lapsed delegates have not even been selected yet, making them easier to pick off.” For a candidate with organizational chops and a proper understanding of the delegate system, Rubio’s free-agent delegates represent a juicy opportunity. That said, it seems likely that the wildly incompetent campaign of Donald Trump will struggle to take advantage of it.

It’s difficult to convey just how fantastically lucky the Republican Party is that Donald Trump invested close to zero time and effort into putting together a professional campaign team. The frontrunner has been loudly complaining over the past couple of weeks about the GOP’s delegate system and how it is unfairly denying him delegates. The fairness of the system isn’t really what’s hurting him – it’s the fact that Trump’s team has no actual idea how to run a campaign and he’s getting dunked on by the far better organized campaign operation of Ted Cruz.

What we’re seeing is a more extreme example of what happened in the Democratic primary in 2008. Barack Obama’s team came in with a specific, detailed game plan on how to wring the most delegates out of every contest, and they invested in caucuses and smaller states where they could run up the score and take home huge delegate margins. Hillary Clinton’s 2008 team, on the other hand, operated under the mistaken impression that winning “big states” was what mattered, and her chief strategist didn’t understand how delegate apportionment worked. They got caught with their pants down, and Obama took them down through superior organizing.

Trump repeated Clinton’s mistake, but seems to have put even less thought into organization or delegate math than Hillary’s people did. Every indication is that Trump either didn’t know how the delegate selection process works or he just ignored it, and that’s allowed Cruz to sneak in and win delegate support in states that Trump won handily. This incompetence is proving to be the chief danger to Trump’s bid for the nomination. The more delegate support Cruz locks up, the more critical it becomes for Trump to win a majority of delegates before the convention. If he can’t win on the first floor vote, then his delegates become unbound and can vote for whoever, and that’s where Cruz’s organizational victories could help him snatch the nomination from Trump.

But just imagine if Trump had bothered to put even the barest minimum of thought into planning and organization. My colleague Sean Illing notes that Trump is desperately trying to play catch-up on this front by hiring actual campaign professionals to do in just a few weeks what Cruz’s people have been planning and executing for months now. If Trump had done this stuff months ago, you have to think the race would be over by now. Although, as Ryan Cooper observes at The Week, “it's hard to imagine a politically competent Trump who would also have run the same campaign that launched him to the front of the pack.”

Either way, Trump’s shallow organization and evident lack of interest in the nuts and bolts of campaigning could be what ends up denying him the nomination. And if that does happen, the GOP will have fallen ass-backwards into dodging a nasty bullet.