"A vote for Hillary is a vote for fracking": Josh Fox talks Bernie Sanders, climate change and the political revolution we need

"We cannot afford a ‘gas bridge.’ Only Bernie Sanders is saying let’s go direct to renewables" 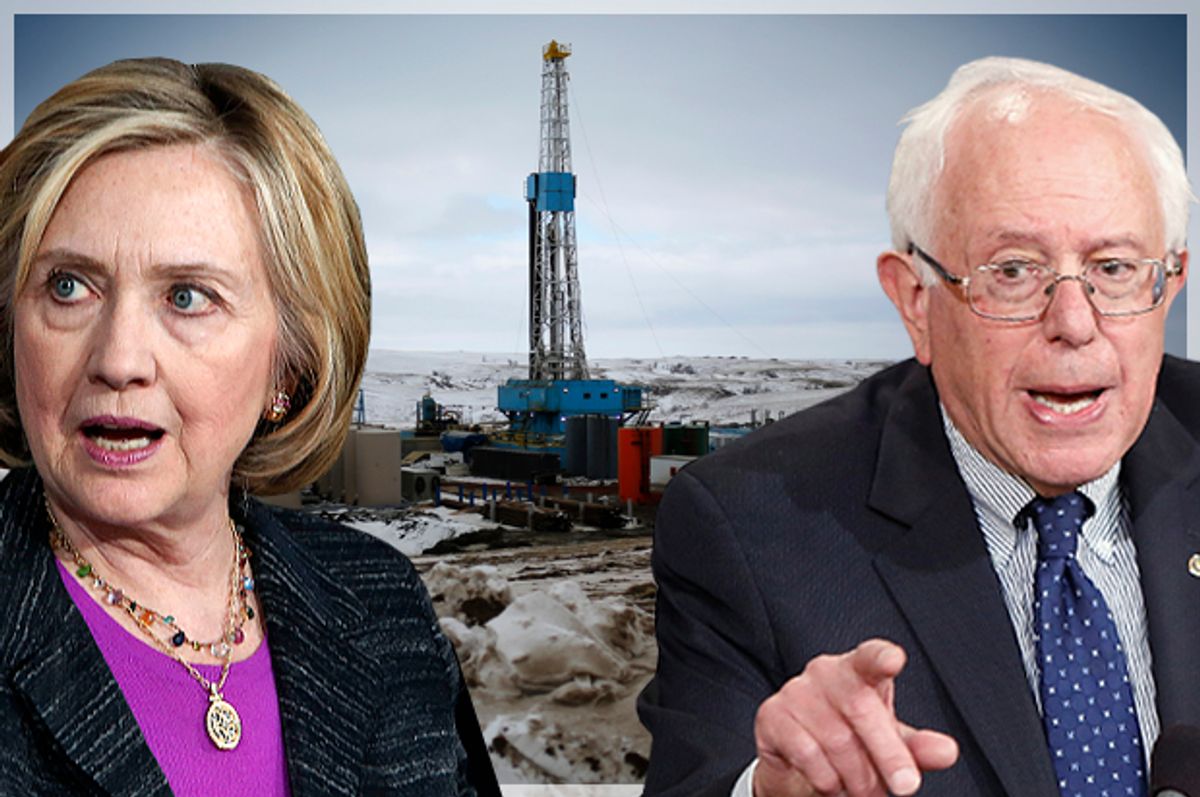 It was chilly and overcast last Saturday as a thousand people filled up the old Cohen’s Vaudeville Theater in downtown Kingston, New York. Though officially a Bernie rally, the event felt as much like a reunion of the Hudson Valley fracktivist community, minus any reunion nostalgia. The day’s theme was energy and climate; veterans from New York’s fracking war loaded the crowd. And yet, the 2014 state fracking ban signed by Gov. Andrew Cuomo was barely mentioned. That victory seemed to matter only as a prequel to ongoing battles — battles to keep fracked gas pipelines out of New York, to stop fracked wells and power stations around the country and the world, and to fold those fights into the larger climate movement.

Then there was the matter of April 19, New York’s chance to help make Bernie Sanders the first “keep-it-in-the-ground president.” In Kingston, anti-fracking leaders like Sandra Steingraber spoke of the urgency of denying New York’s delegates to Hilary Clinton, a supporter of “regulated fracking,” who as Secretary of State launched the Global Shale Gas Initiative to promote fracking in 32 countries.

It was a raucous rally, capped by a banjo-assisted pump-up speech by Josh Fox, the filmmaker and activist. Fox was greeted with a hero’s welcome earned over years of seeding fracktivist cells across the state with screenings of his Oscar-nominated 2010 documentary, “Gasland.” He started these screenings a decade ago with ten minutes of raw footage. As he built the film, scene upon scene, Fox also built out the foundation for what would become a mighty statewide (and national) anti-fracking movement. He’s now urging that movement to use its organizing networks and skills in the Democratic primary. This is how the circle closes. Some of the earliest activist networks Fox reoriented toward fracking were established, and then abandoned, by Barack Obama’s 2008 campaign. “We thought we were getting a grassroots movement with Obama, but what we got was a grassroots movement to elect Obama,” says Fox. “A lot of the fracking movement built on the [grassroots network] that Obama let go of, and we picked it up.”

Fox believes Sanders is what Obama claimed to be: a true grassroots leader who will continue to blow on the embers in the street after Inauguration. He also happens to be the only candidate in the race unequivocally opposed to developing fracked gas.

“A vote for Hillary is a vote for fracking,” Fox says in his stump. “The New York fracking movement cares about the whole country. It cares about the whole world. We care about climate change. We don’t have a margin of error left if we are going to prevent two degrees Celsius of warming. We cannot afford a ‘gas bridge.’ Only Bernie Sanders is saying let’s go direct to renewables. Only he is saying climate change is our No. 1 security challenge.”

Fox closed in Kingston by leading the house in a chant of “Turn off the gas!” Then he sent everyone outside, past a folk quartet in the parking lot singing “Solidarity Forever,” to knock doors in the cold.

Watching Fox whip Kingston into a canvassing frenzy, you wouldn’t guess he was also touring a challenging new documentary about climate despair and the need to start building a Moral Ark. The 43-year old Fox has honed a hell of a hopeful political speech, but he knows the climate crisis won’t be solved by electing Bernie Sanders, or “turning off the gas,” or building a national smart grid. On the drive upstate from Brooklyn, we talked about how the film was born in recognition of the closing window on the radical system overhaul needed to prevent the Earth from skating past two degrees Celsius of warming. The documentary, which carries the fittingly Strangelovean title of “How to Let Go of the World and Love All the Things Climate Can’t Change,” is about reckoning with our reflection in this closing climate window, and imagining the possibilities on the other side. It’s a complicated and conflicted film, less tidy than the “Gasland” movies, but just as important. It opens April 20 at IFC.

“The movie is based on a conversation I had with [the climate activist] Tim DeChristopher when I was looking at the science,” said Fox. “I told him, ‘I don’t see how we get out of this.’ And he was like, ‘You’re right.’ Then why wasn’t anyone saying that? There’s this ping-pong match between despair and denial. What I wanted to do was help the problem. And it’s the heart that helps it, not the head. I saw all these incredible minds kind of get wrecked on the rocks. I had to reinvent myself and find a path forward emotionally as an activist.”

For Fox and for the rest of us, that path forward is treacherous terrain, a minefield of technical, social and personal challenges. Although Fox is beginning to engage with the technical aspects of post-350 climate realism — i.e., agitating to begin the decades-long process of decommissioning nuclear power plants in coastal areas — these are not his concern in “How to Let Go of the World.” Where “Gasland” and “Gasland 2” focused on the science and politics of fracked gas, this one turns inward.

“The film is about organizing principles that are also permanent virtues and values,” says Fox. “Community, democracy, civil disobedience, creativity, human rights, innovation, courage, love, resilience, generosity. We need these values if we’re going to win any of these climate battles. But we’re going to need them even more if we lose them.”

“How to Let Go of the World” opens with Fox dancing in celebration of New York’s fracking ban. It is a joy short lived. When he begins researching the film, intended to bring fracking into the “bigger picture” of climate change and renewable energy, Fox slams up against the full dimensions of the climate crisis, which his years of tight focus on fracking had obscured. He brings us along for interviews with climate experts and activists like Bill McKibben, Lester Brown and Michael Mann. They give him the bad news. Fox begins to feel that it’s “just too late.” The weight of it makes him woozy. While Mann is describing the charging Four Horsemen of the climate apocalypse, the frame goes fuzzy and the audio fades in simulation of a panic attack or the loss of consciousness. The interview sequence is punctuated by a scene in which Fox’s camera lingers for a long and gut-wrenching moment on the sunken, visibly grieving eyes of the climate journalist Elizabeth Kolbert. (“She’s the Queen of Darkness,” says Fox.)

Forty minutes into the film, Fox considers giving up. He narrates, “I just couldn’t do it anymore. It was just too much. I felt like letting it all just float away, quitting this mission … Just let it all go. All those greenhouse gasses hanging there like a century of human regret ... Here’s what we know: The fires, the droughts, the floods, the hurricanes, the tornados. They’ll get worse. We’ll lose our coastal cities, most of our forests. We’ll lose 30-50 percent of the species on the planet. That’s a lot of goodbyes.”

It’s also a lot of hellos — to the 800 million climate refugees that will be created in a two degree Celsius scenario.

After enumerating all of the treasures and paradises that will be lost, Fox hits bottom. While flat on his back, he narrates the film’s titular question: “What are the things that climate change can’t destroy? What are those parts of us that are so deep that no storm can take them away?”

To answer this question, he hits the road. He visits people fighting for their values against all odds and in the midst of their own mini Apocalypses: Amazonian tribes living in giant oil spills; South Pacific Islanders whose islands are disappearing, yet who paddle wooden skiffs directly at coal barges the size of the Empire State Building; Chinese activists fighting a police state for dignity and breathable air. Closer to home, Fox visits the Rockaways and hears stories of solidarity and community in the wake of Hurricane Sandy. At the Rockaways Action Center, the organizer Aria Doe tells him, “We’re stronger now than we were before the storm. We know whatever hits us, we can rise above it collectively as a community. We make the community feel safe, secure and loved. Climate change is about a hand to other people.”

Doe’s statement is a pretty good description of what Fox calls the “revolution inside.” It is a commitment to values and struggle in the face of disaster that provides meaning and, crucially, will allow us to stay human and even joyful as climate pressures mount. “Our society is founded on competition and selfishness, but if we’re going to have any humanity going forward [in a climate collapse scenario] the impulse can’t be to get in your bunker with an extra set of shotgun shells,” Fox told me. “We need to get ready the extra bedroom, the extra seat at the table. Get ready to process the calamity as citizens, a community, a family of humanity.”

As Tim DeChristopher suggests in the film, a climate collapse could provide an opportunity for building a scaled-down society according to values our consumer society chokes out. Or maybe it won’t. In any event, “How to Let Go of the World” ends as it began, with a dancing Fox, joined this time by his new comrades from around the world.

Fox emerged from the film recharged — and less ready to concede this calamity. As he did with the “Gasland” movies, he’s now using “How to Let Go of the World” to organize communities around the country. Under the banner of the “Let Go and Love Tour,” screenings of the movie are followed by a discussion and a sign-up where people matriculate into local activist groups. This grassroots organizing — Fox calls it his “Johnny Appleseed routine” — is followed by matchmaking efforts between local politicians and contacts in the renewable energy industry. “On tour, we identify a key person in every community and connect them to the captains of the renewable energy,” Fox explained. “In Denton, Texas, for example, we stopped two gas-fired plants from being approved. Now they’re considering 100 percent renewable. Can we get 100 cities to sign up for renewable? In China, they’re building one terawatt of renewable. That’s equal to one-fifth of their energy, or all of ours. If they can do it in 15 years, why can’t we do it in 10 or eight?”

It’s an exciting question, especially when posed by a preternaturally positive organizing dynamo like Fox. As we fight to build our own green terawatt, we’d do well to keep a place for the other, less hopeful questions raised by “How to Let Go of the World,” such as how to carry our humanity into a mostly miserable future where the dancing and singing may not come so easy.