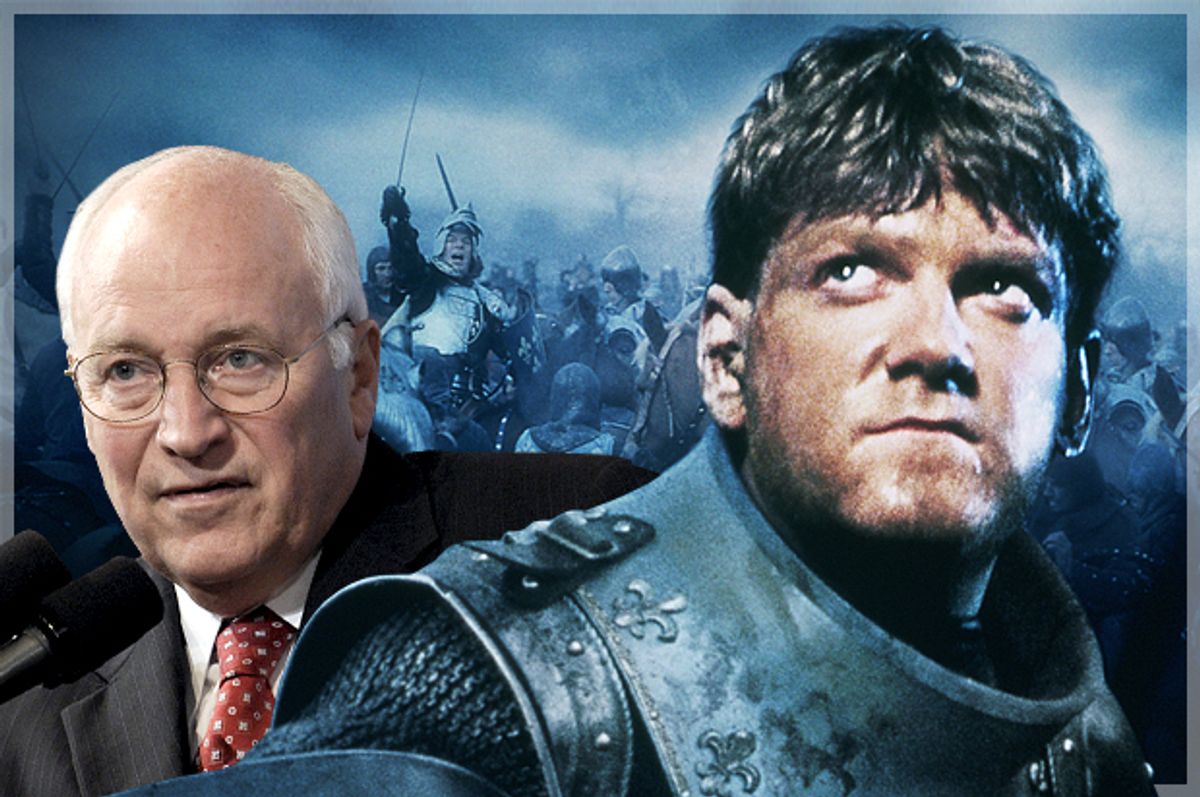 For $28,000 a day, a company called Movers & Shakespeares uses Shakespeare’s plays to teach “leadership” and “critical business” skills to clients such as the Wharton School of Business and Raytheon Missile Systems. The company was founded by Kenneth Adelman, a Reagan administration alumnus and neoconservative think-tanker, and his wife, Carol Adelman, also a conservative think-thank veteran. As detailed in the Washington Post, this Washington, D.C., “power couple” teaches that the lesson of "Henry V" is to “motivate through speeches and, once you’ve won, treat it like a merger and not an acquisition.” Julius Caesar, apparently, is a “case study in how to execute a takeover and what not to do after you win.” According to them, Shakespeare offers future CEOs and business leaders the models they need to achieve ruthless success behind the veneer of ethical behavior.

This kind of corporate pablum about Shakespeare tends to reflect the popular notion, sometimes unspoken but implied, that Shakespeare was, fundamentally, a conservative. Aside from the idea that he didn’t write the plays attributed to him, this is the most stubbornly persistent myth about Shakespeare. It takes several forms — sometimes thoughtful, and often, paradoxically, voiced in declarations that Shakespeare had no politics, beyond a kind of vague deference for tradition, order and hierarchy. Of course, once you’ve established such a reverence for hierarchy in the plays, a supposedly apolitical Shakespeare has implicitly become a conservative.

In high school, students reading Shakespeare are fed ideas about the Great Chain of Being, which posits a universe as composed of a divinely ordered hierarchy, each person in their respective place, and any rupture in this order leading to chaos and social disintegration. We’re told that since Shakespeare’s theater company was The King’s Men (starting in 1603), and some of his plays were performed at the royal court and not only in the rather wild space of London’s public theaters, he must have always put flattery of the powerful at the top of his to-do list.

It’s time to throw out this image of Shakespeare as a writer who exhibits deference to authority, royalty, and nobility, and who deeply fears social change, and look at the plays with fresh eyes, unburdened by these conservative bromides. In a recent book, "Shakespeare’s Universality: Here’s Fine Revolution," Shakespeare scholar Kiernan Ryan makes the case for the radically egalitarian perspective of Shakespeare’s work. Ryan discards previous uses of the term “universal,” which imply an unchanging human condition. He argues that Shakespeare’s plays “reveal the potential of all human beings to live according to principles of freedom, equality and justice. It is revolutionary because the fulfillment of that potential implicitly demands the complete transformation of the terms on which people lived in Shakespeare’s day and tragically, in so many ways, still live today.”

This isn’t to say that Shakespeare has not been used for conservative or reactionary ends. We only need to think of nationalistic or colonial projects that have relied in part on a narrative of Anglo cultural superiority. Nor is it to deny that, for example, King Duncan in "Macbeth," an ancestor of England’s King James, is given a flattering portrayal. There were political realities that Shakespeare had to navigate, including censorship, a lesson he no doubt learned from the trouble that ensued when the Earl of Essex used his "Richard II" to help justify an attempted coup. But, as Ryan points out, while Shakespeare’s characters inhabit a world of strict class divisions, racism, or misogyny, that world is “dramatized from a perspective rooted in the recognition of the fundamental equality of all human beings. The plays invite us to view the way things were in Shakespeare’s time from an egalitarian standpoint that is still in advance of our time.”

The case for a conservative Shakespeare often rests on his supposed devotion to divine right, the notion that the monarch is, essentially, appointed by god and and vested with divine authority. No doubt this was a key tenet of the Elizabethan and Jacobean world. But, quite frankly, Shakespeare makes a mockery of the idea.

In "Richard II," Richard is a king who is unwilling to question the consequences of his decisions since he puts such faith in his divinely sanctioned mandate: “Not all the water in the rough rude sea / Can wash the balm from an anointed king. / The breath of worldly men cannot depose / The deputy elected by the Lord.” Richard, who of course will be deposed, makes the error of actually believing the lie of divine right, which is intended, rather, to be cynically used to legitimate his authority. Right after this speech, an ally arrives with the news that thousands of soldiers have abandoned Richard for his rival. So much for having god on your side.

Henry IV (who deposes Richard) and Henry V understand that divine right is useful only insofar as it secures their power. The elder Henry, while dying, suggests that his son “busy giddy minds,” or distract his restless subjects, through “foreign quarrels.” And, indeed, "Henry V" opens with religious authorities devising an incredibly strained and arcane justification for war with France. Henry quickly transforms this into his repeated insistence that god is on his side in a just and necessary cause, revealing an almost staggering hypocrisy that might make Dick Cheney blush.

OK, but even if Shakespeare saw past the myth of divine right to its political realities, he still revered great monarchs and believed in maintaining a strict hierarchy, right? "King Lear" opens with the depiction of an authoritarian, arrogant and spoiled king: “Come not between the dragon and his wrath,” Lear tells an advisor who tries to contradict him. However, after the fallout from his ill-executed plan to divide his kingdom among his daughters, Lear is forced to confront a system that has created massive injustice and pain. The rhetoric of scene 1 stands in stark contrast to the Lear of act 3, who, upon meeting the impoverished Poor Tom, delivers his soliloquy to the “Poor naked wretches”:

O I have ta’en
Too little care of this. Take physic, pomp,
Expose thyself to feel what wretches feel,
That thou mayst shake the superflux to them
And show the heavens more just.

The “superflux” here is excess of wealth. Lear laments that he has allowed such poverty to occur on his watch. This reverberates with what another fallen member of the nobility in the play says: the blinded, outcast Earl of Gloucester, also confronted with Poor Tom, comments that “distribution should undo excess, / And each man have enough.”

This idea — that a king or member of the ruling class should help to create a just society with shared wealth — is radical enough (just think of the horror that the word “redistribution” arouses in today’s conservative circles). However, Shakespeare takes it the crucial step further. In response to Poor Tom later in the same scene, Lear comments:

thou art the thing itself. Unaccommodated
man is no more but such a poor, bare, forked animal
as thou art. Off, off, you lendings! Come, unbutton here.

In this moment of undressing, as Ryan writes in his introduction to the play, Lear “physically enacts his recognition that the same ‘poor, bare, forked animal’ shivers beneath his royal robes and a beggar’s rags.” What separates a king and the poorest wretch is merely social custom, nothing innate. This incredible moment of equalizing is reminiscent of another Shakespearean king’s speech, in "All’s Well that Ends Well," a speech that directly undercuts the source of the king’s own power. The King of France remarks:

Strange is it that our bloods,
Of colour, weight, and heat, poured all together,
Would quite confound distinction, yet stands off
In differences so mighty.

In other words, there is no discernible difference between royal blood and anyone else’s — it “confounds distinction.” And yet, based upon the idea of the biological superiority of a royal or noble family, we create and justify enormous social differences.

Such startling moments continually recur throughout Shakespeare’s body of work. Some are famous, such as Emilia’s speech in "Othello" about the sexual double standard to which women are held in a patriarchal society. And some are obscure, such as the nameless Goth in "Titus Andronicus" who, observing the illegitimate biracial son of the white empress, comments, “Had nature lent thee but thy mother’s look … thou might’st have been an emperor”: there is nothing substantively inferior about the black child, but rather only socially constructed prejudice against blackness.

There are, certainly, counterexamples, moments when characters seem to express very different ideas. The question to ask, Ryan explains, is whether the viewpoint of a character resonates with the overall vision of the play. For example, the famous utopian speech in "The Tempest," which is mocked by some of the characters, is for Ryan a demonstration that the “fundamental obstacle” to a just society “is sovereignty and the unequal distribution of property, wealth and power.” I don’t think that will be a bullet point at the next Movers & Shakespeares seminar.

As we continue to confront a world of gross inequality, perhaps we can find in Shakespeare’s plays not paeans to “great men,” tips for the next generation of corporate leaders, or warnings about the dangers of social change. Rather, we should keep in mind a simple but profound, and profoundly democratic, point, summed up in the words of novelist Robert Winder: “Shakespeare’s idea is simply this: that worms will gnaw on kings and knaves alike. It is so simple that it is easy to forget it. Shakespeare’s strength is that he never forgets it.”