The battle of New York is upon us: What you need to know about this week's primaries 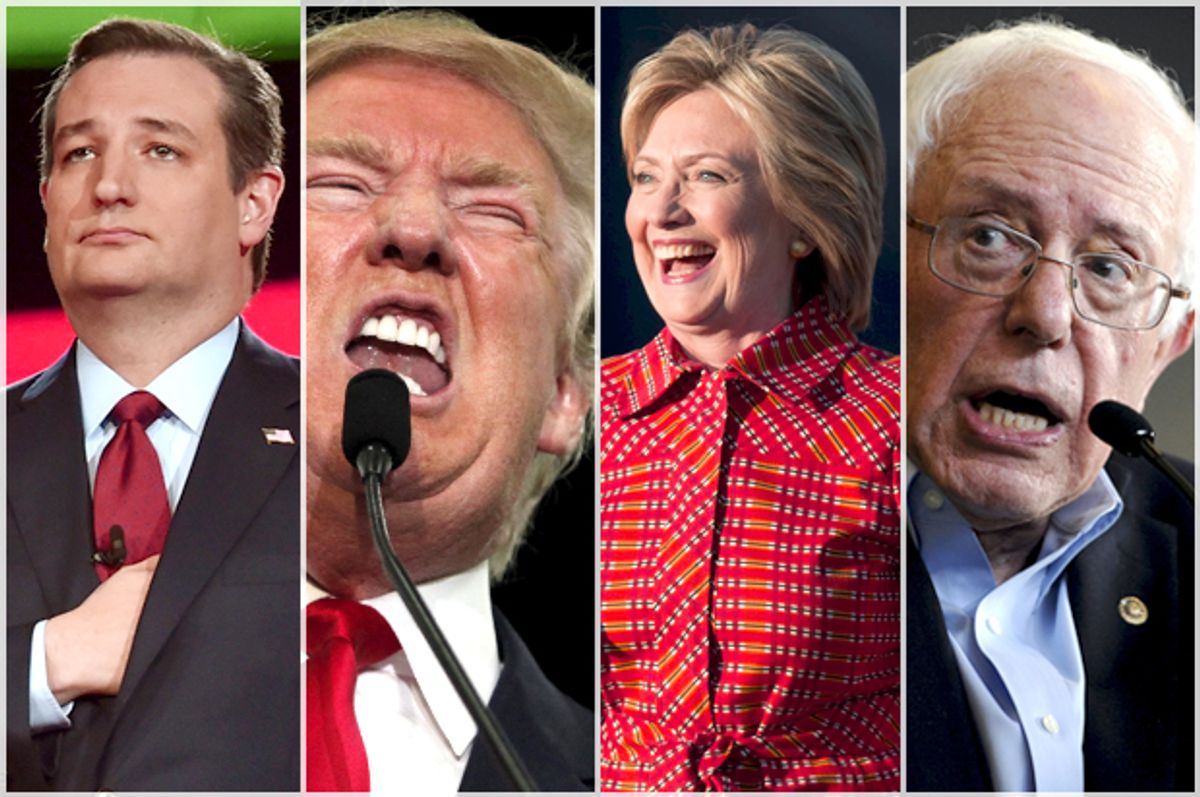 Hillary Clinton is feeling so confident in her chances of winning the New York primary on Tuesday, she took time out of her campaign on Friday to play dominoes like a common unemployed day laborer. This was an obvious pander to working-class voters by Wall Street’s favored candidate. It upset the 3-Card Monte Union Local 100, which immediately endorsed Bernie Sanders. Things are getting ugly in New York, folks!

Jokes aside, there is not a lot of drama left about how Tuesday’s election will play out. Barring some unforeseen catastrophe or the major polls being so wrong they make the polls in the Michigan primary look spot-on, Hillary Clinton and Donald Trump will walk away with good-sized delegate hauls on Tuesday.

The big question on the Republican side is whether John Kasich and Ted Cruz will be able to hold down Trump’s percentage of the vote. Going into the weekend, the real-estate mogul was hovering somewhere between 52 to 53 percent. If he wins Tuesday with that percentage of the vote in each congressional district, he walks away with all 95 delegates up for grabs in the state. Hold him to under 50 percent, and he gets two delegates in a given district, while the runner-up gets one. (Each New York district will be electing three delegates on Tuesday.)

Trump will win the lion’s share of delegates, but Cruz and Kasich may pick off a few here and there. Of course at this point, Trump’s path to 1,237 delegates is narrow enough that any little bit the other candidates can do to slow him down helps the “Never Trump” forces. Expect to hear a great deal of grousing about a “rigged” system from Trump if he doesn’t sweep all 95. Also, this election is technically for delegates to the state Republican convention in May, where the delegates to the national convention will actually be chosen. Although all the Trump delegates will be bound to vote for him on the first ballot, they will be free to go for another candidate on the second and beyond. I’d expect Cruz’s solid delegate-hunting operation to be all over the state convention next month, trying to extract loyalty pledges from a few of them.

This will be a hard lift for Cruz, who seems to be as disliked by New York Republicans as he is by most other sentient humans. As for Kasich, he spent Friday suggesting that young women could protect themselves from sexual assault by avoiding parties where lots of alcohol is being served. Since (a) this paternalistic bullshit removes all onus of responsibility from men to, you know, not assault women, and (b) the vast majority of young women like having social lives and are not going to become nuns, his comments seemed to go over about as well as you would expect.

As for the Democrats, oh boy. Clinton’s lead was hovering around ten points heading into the weekend, and it is unlikely that debate Thursday night moved many voters, unless flipping channels to the Islanders’ playoff game counts. In other words, neither candidate did themselves any favors. There were some important discussions about their differences on a couple of issues, with the Israel-Palestine conflict being the most notable (and most needed), but was that enough to break through the angry tone between them? I’m skeptical.

On the other hand, at least one party is having a spirited debate about issues while the other is mostly keeping Reince Priebus wandering around his house in the middle of the night in a dark mood with a drink in one hand and his iPhone in the other.

New York is not Bernie Sanders’ last stand, but with the proportional allocation of delegates, he obviously needs a big win to cut into Clinton’s lead in pledged delegates. He is not going to get it, and in fact with a loss will lose ground in the delegate count. (Note: I am not thinking about super delegates here so don’t yell at me about the deck being stacked against Sanders.)

One sign that the Sanders campaign is already giving up on New York: It allowed the candidate to fly to Rome on Friday to deliver a speech at a conference in the Vatican. Yes, I know the subject matter of income inequality and the need for a “moral economy” is in Sanders’ wheelhouse. But if the polls in New York were much tighter, or if he was even defending a slim lead, he would likely not have given up a day on the campaign trail and risked wearing himself out with two transatlantic flights in less than 24 hours to give a 10-minute speech. It would have been irrational.

It also would have capped off what was a mismanaged last week in New York for Sanders. Somewhere in between the brouhaha over a warm-up speaker at a Sanders rally Thursday night adopting the language of a Twitter egg and the hiring and then suspension of Simone Zimmerman as the campaign’s Jewish outreach coordinator, we were reminded that this is a campaign that has been stretched to the breaking point. Its staffers are likely overworked and exhausted, and so they keep booting what would normally be routine ground balls.

The Zimmerman hire is a perfect example of a campaign that has spread itself too thin. Making such a high-profile hire without, apparently, a thorough vetting is bad enough. But to have this blow up in their faces in front of the Jewish community a week before the voters hit the polls IN NEW YORK is insane. Because say what you want about Netanyahu – and I personally would be happy if he wandered off into the Negev and was never seen again – but polls show about half of my American Jewish brethren still approve of him. So not pissing on him if you want Jewish votes in a state with a heavy Jewish population is likely an unavoidable reality at the moment.

Sanders was already facing an uphill climb in New York. It is Clinton’s home state that she represented as a Senator for eight years. It has a closed primary with absurd and stupid rules. For example, any independent voter who wanted to participate had to switch their registration to one of the parties no later than last October. This has hurt Sanders more than Clinton, as he has done much better with independents than she. With all these barriers, he was always going to have to run a perfect campaign to overtake her natural advantages, and he hasn’t.

The bottom line is that for all the continued shrieking from partisans and the puffed-up importance that has been granted Tuesday’s contest, the results are not likely to change the shape of the race. Hillary Clinton will still have a significant delegate lead and Donald Trump will still have his work cut out for him to avoid a brokered convention. And we can all start hollering about next Tuesday, when five more states go to the polls.