Donald Trump screwed himself: An actual "master negotiator" would know the rules and stop whining

Cruz out-organizes Trump, swipes delegates. This is America, Donald: The guy with the most votes doesn't always win 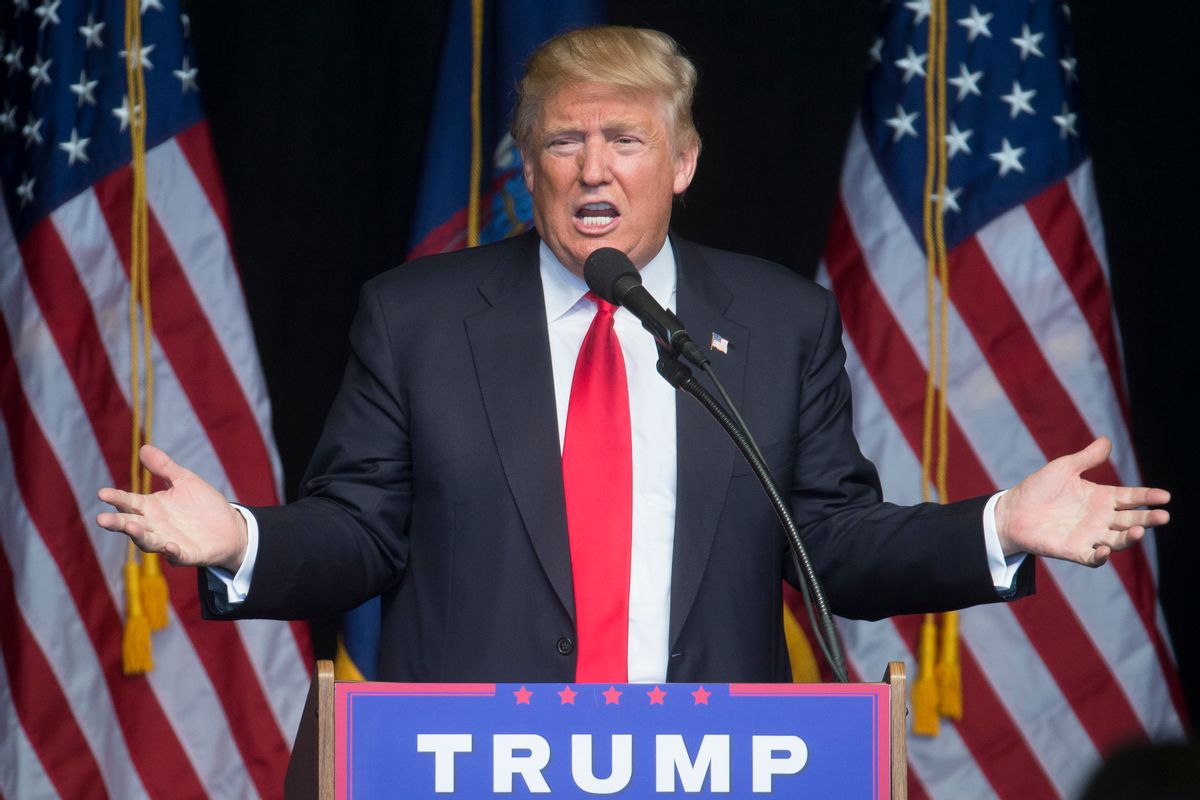 Donald Trump speaks during a campaign event at in Watertown, N.Y. (AP)
--

Over the weekend, Donald Trump finally got to do his favorite thing again: quote his rising poll numbers on the stump. There's nothing he loves more than bragging about how great he is and nothing makes him happier than waving polls around and hearing his fanboys cheer his dominance. Everyone expected him to be doing well in New York, but according to a new CBS poll he is also doing very well in California. If he can get his act together out west (a big if) he might just limp into Cleveland with enough delegates to make it on the first ballot.

And fortuitously for him, according to that same poll even if he comes up short, 62 percent of Republicans nationwide think it's unacceptable not to give the nomination to the person who got the most votes. Apparently, the whole idea of having to reach some sort of threshold in order to prove you are a capable national candidate is not something these voters think is important. No wonder Trump was in such high spirits. If that's the case, he's won it already. There's no way Cruz can catch him.

RNC chairman Reince Priebus tried to tamp down any such hopes. When asked about it on "Meet the Press" on Sunday, he explained:

That's not true, actually. People commonly win with a plurality of votes, including a bunch of presidents. Bill Clinton won with a plurality in both of his elections. Richard Nixon won with a plurality in 1968. And even weirder things happen than that, such as a candidate winning the Electoral College but losing the popular vote (or being installed by a 5-4 majority of the Supreme Court). The "rules and concept of his country" are very idiosyncratic when it comes to voting.

Priebus is just trying to defend the party rules and that's understandable. It's not as if this is something new. Parties have had arcane delegate processes for a long time and for good reasons. The institution has an interest in choosing someone who represents most of the party and can win a national election rather than allowing a minority faction to decide. It's hard enough getting a candidate who can appeal to across all the political lines to win the presidency; any party wants to at least have a consensus within its own coalition. Still you can't blame the public for feeling that the whoever gets the most votes should win. That's what we're all taught from time we're kids is the fair way to decide such contests.

However, the poll also shows some confusion among the respondents on this issue. While 62 percent think the candidate with the most votes should win, 54 percent also think it would be unacceptable if the candidate with the most delegates is not the nominee. If I had to guess, I'd say this stems from hearing all the press reports about Cruz seducing and coercing delegates at state conventions and Trump's charges that Cruz is "stealing" the election. Unfortunately for Trump, despite their belief that he who wins the most votes/delegates should win the nomination,  all his bellyaching has actually led 55 percent of Republican voters to believe it's perfectly acceptable for Cruz to convince Trump's delegates to switch.

Let's just say that Republican voters are confused and you really can't blame them. Their party's process is insanely complicated. Take, for example, West Virginia where Trump is expected to win the election next month handily. According to Politico this is how they will choose delegates:

“Not even Einstein could easily understand the selection process today,” said Mike Stuart, a former West Virginia Republican Party head and chairman of Trump’s campaign in the state.

West Virginia's Republican ballot is a six-page form that places the delegate elections behind dozens of state legislative and county races. Some voters, West Virginia GOP insiders said, stop voting before they make it to the delegates. But getting there is the easy part.

More than 220 people are running for 22 statewide slots as convention delegates. On the ballot, they’re divided based on the candidates they support and then listed alphabetically. There are 31 for Trump, 36 for Cruz and 10 for John Kasich, who failed to file a full slate of delegates. A fourth list includes 27 “uncommitted” candidates, and there are also lists of would-be delegates for candidates who have already dropped out.

Voters wishing to select a full slate of Trump delegates can choose up to 22 of them -- though if they inadvertently select 23 or more, all of their choices are thrown out. They must also be aware of a new rule to prohibit more than two delegates from residing in a single county -- and seven from a single Congressional district -- a stipulation that isn’t mentioned on the ballot.

Apparently, seven out of nine Trump delegates turn out to be from one county so they'll automatically be disqualified. So even if he wins big in the primary, he'll likely come out a loser in the delegate count.

Meanwhile, Georgia selected delegates to the state convention in June at activist meetings held around the state over the week-end and it didn't go Trump's way either. According to this article in the Atlanta Journal-Constitution, the Cruz forces deftly outmaneuvered the Trump forces leaving Trump with only 11 or 12 delegates pledged to him beyond the first ballot compared to Cruz's 32, even though Trump won the state. (There are more delegates to be chosen at the state convention so he could still pick up some more there.)  For reasons unknown, in one location, the Trump supporters took the American flag and flounced off in a huff:

Meanwhile, down in Florida Marco Rubio's putting a crimp in Cruz's style by holding on to his delegate slate for possible leverage at the convention instead of freeing them up to vote elsewhere. (Rubio still has more delegates than Kasich.)  Their delegate selection process was very old fashioned:

Luckily, delegates in Florida are pledged through three ballots so there wasn't a riot.  Trump supporters protested anyway, chanting "99 for Trump." (Florida has 99 delegates.)

Normally the front runner would have put it away by now but Trump just can't get to that magic number. Now he's been caught flat-footed apparently believing that he was going to be the winner by acclamation and failing to prepare for this contingency if he came up short. And so he whines.

Now, he's insisting that the rules be changed, threatening the RNC with a "a rough July at that convention" if they don't do it. He said, "you better get going, and you better straighten out the system because the people want their vote, the people want to vote and they want to be represented properly." Nobody's exactly sure what he thinks the new rules should be but it's fair to assume they will ensure that he's the victor. It's not likely to happen:

Priebus maintained Sunday that state parties, not the RNC, decide their individual delegate processes, which have been finalized since last October.

"The process has been going on for a month in each of the states where there's been a convention," Priebus said. "It's not a matter of party insiders. It's a matter of 2,400 grassroots activists, and whatever they want to do, they can do."

The good news is that Trump said in a press conference on Sunday that he "hopes" the convention "doesn't involve violence" complaining once more about how corrupt the system is that allowed Ted Cruz to take delegates out to dinner to persuade them to come over to his side.  He found such corrupt behavior very distasteful but set the record straight that he could do it too if he chose to saying, "nobody has better toys than I do. I can put them in the best planes and bring them to the best resorts anywhere in the world. Dural, Mar-a-Lago. I have something that blows everything away." Of course he does. Everyone knows his toys are huge.

You have to wonder why a man who is so fantastically superior in every way is having so much trouble getting enough delegates to win on the first ballot. Why even those losers John McCain and Mitt Romney were able to get that done. If the world's greatest negotiator can't close this deal what makes anyone think he can win the general election?