When Lena Dunham's comedy stopped pretending to be the new "SATC," it found its sweet spot 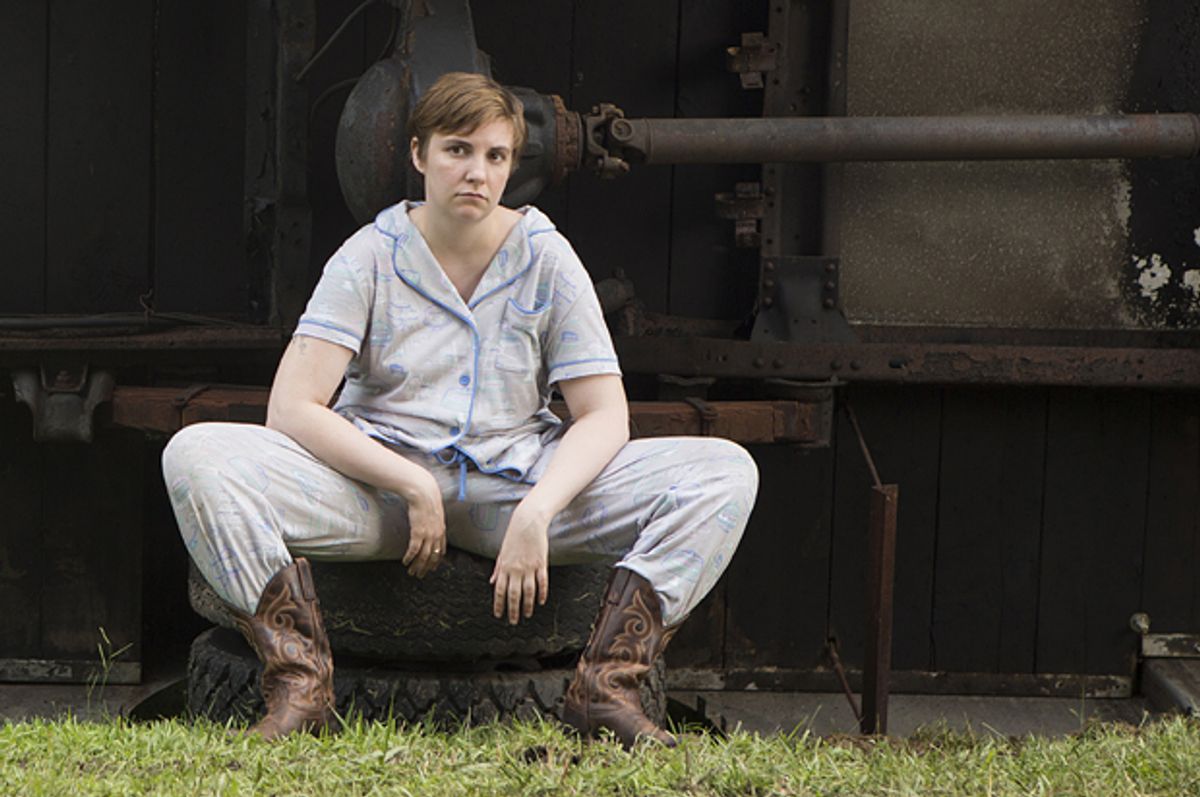 This February, when I covered the return of “Girls,” I did some complaining about Desi (Ebon Moss-Bachrach) and Marnie (Allison Williams)’s wedding party:

Hannah, Shoshanna, and Jessa [are] Marnie’s three bridesmaids, while Ray and Adam are part of Desi’s entourage. As far as the show requires, it makes perfect sense. But based on what we know of the characters, and their fraught connections to each other, it makes no sense whatsoever. Marnie and Hannah quarrel as much as they get along; Marnie and Jessa have antagonized each other for years, including last season, when Jessa told Marnie she hated her music; and though it’s entirely likely that Marnie would rub in her superiority to semi-romantic rival Shoshanna, it’s hard to imagine that Shoshanna would fly in all the way from Tokyo to attend the wedding of the girl who she once pounced on top of and screamed, “I hate you!”

So I was pleasantly surprised to find that the fifth season premiere of “Girls,” which featured the aforementioned wedding, ended up being an anomaly for the rest of the season—a starting point, from which the characters would spin farther and farther out of each other’s orbits. The titular girls barely saw each other this season; some of the show’s most powerful episodes since the second season were half-hour portraits of devastation for Shoshanna (Zosia Mamet) and Marnie that didn’t feature any of the other girls (except for literally one shot, in “Panic In Central Park”).

This season dug to the root of what has always been a bit perplexing about “Girls,” and that is that these people continue to choose to put up with each other. Partly, it’s because they’re all terrifically too self-absorbed to really engage with each other, but mostly, it’s because the last five seasons have depicted four women growing farther and farther apart. History and affection occasionally bring them closer to each other, but their mutual ties are much more obligation than friendship.

It’s well-depicted in one of the season’s more classically sitcom plot arcs, where Jessa (Jemima Kirke) and Adam (Adam Driver) fall into a relationship because the characters should probably do something, and both Tokyo and a shotgun wedding were already taken. The narrative of their relationship is a confused one; in last night’s finale, Jessa and Adam throw crockery and furniture at each other in a screaming fight before having intense makeup sex in the wreckage of their apartment.

But their relationship is the show’s most revealing depiction of widening distance between friends; Jessa and Adam choose to leave Hannah (Lena Dunham) behind. Neither of them wants to hurt Hannah with their relationship, but neither is willing to sacrifice their spark for her, either. Jessa ignores her phone calls; Adam avoids eye contact. Hannah, wrapped up in her own issues, is too self-involved to even notice that much has changed until episode seven, “Hello Kitty.” In last night’s finale, Jessa and Hannah make a lot of pronouncements of having been each other’s best friends. But remember, Jessa is the friend that disappeared while carrying a bag of groceries. They may feel hurt and guilt towards each other, but that’s less because of actual loss and more because of the imagined, nostalgic ties between them are revealed for their hollowness.

In many ways, as I’ve noted before, “Girls” struggles because it’s still in existence. At this point in the narrative, no regular character on this show is in an active, authentic friendship with another. Trying to pull all the threads together into satisfying beginnings and ends makes for mushy storytelling, even if individual scenes are interesting and even funny.

“Girls”’ season five succeeds by ceasing to even try to connect these people, except for the premiere and (some of) the finale. I’ve never been convinced at “Girls” attempts to be representative for young, hip New Yorkers, but it comes closest in creating a narrative of the social landscape of being a young person in a city—where one is less likely to be in the tight friend groups of “Friends” or “Sex And The City” and more likely to feel disconnected and lonely, despite knowing a lot of people from school or dating or social media.

In a sense, there’s a realism to these diluted connections, these scattered acquaintances that used to share your secrets. Marnie and Hannah, in particular, have a kind of long-term, unspoken, college-age loyalty towards each other that seems to still sustain them, whether that is in occasional emergency phone calls or crashing on each other’s couches. But the two have only spoken to each other in the same frame twice this season—at Marnie’s wedding, and at Adam’s play about Kitty Genovese.

And even when platonic intimacy is offered, it’s rejected. With last week’s roadhead incident between Hannah and Ray (Alex Karpovsky), one of the last platonic friendships on the show became (very weirdly) sexual. Numerous times this season, when Hannah has brushed towards some kind of human relationship that doesn’t have sex in it, she’s actively inserted it—whether that’s asking if she should make out with Jenny Slate’s guest character Tally, or sleeping with the yoga instructor at her mom’s retreat, or flashing her vulva at her boss (!).

The end of “I Love You Baby” is a layered montage of people at doorways or thresholds. Hannah is so unable to reach Adam and Jessa that she can only leave them an offering outside their door, in the weirdly dated form of a fruit basket. Marnie and Ray, now boringly having sex once more, try to break down the door where Desi is getting a blow job from a groupie. Adam punches through the door Jessa has slammed, intent on reaching her despite her intentions. It’s a meaningless ending, because there’s no sense of actual closure except that it’s a montage. But one thing feels real from this season—one thing feels like a true story from this era of performative living and economic recession, of gentrified Brooklyn and gay marriages. They’re none of them as close as they have for so long pretended to be, and maybe now, entering its final season, “Girls” is beginning to come to terms with it.