Ted Cruz and the author of the Kansas tax-cut disaster are going to make trickle-down work this time, honest 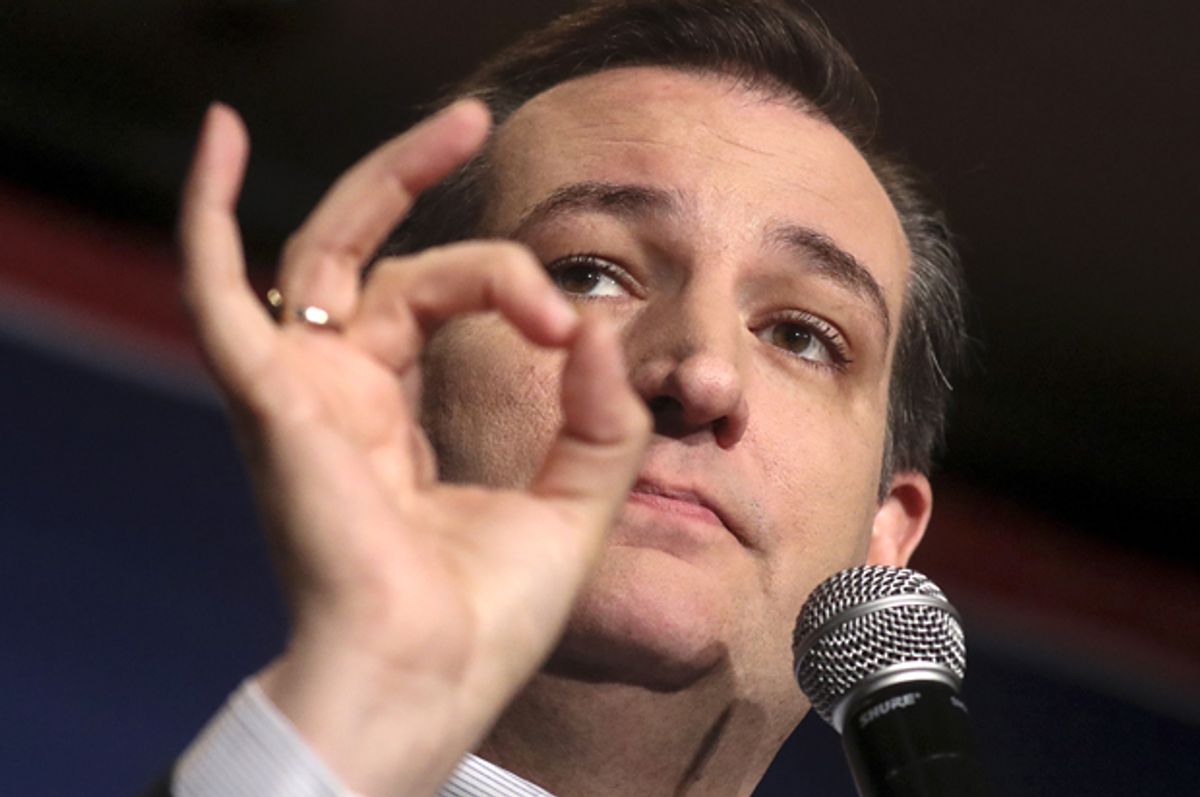 There are moments, infrequent but poignant, in which I find myself yearning for the good old days of the Jeb Bush presidential campaign. What a time that was – the uncomfortable-in-his-own-skin awkwardness; the sad, pleading earnestness; the inescapable aura of crushing sadness and defeat; the Apple Watch. It was magical. And to counteract all that soul-withering desperation, there was the Jeb Bush promise, the much-mocked and self-evidently overoptimistic guarantee that under President Jeb the United States economy would grow at an annual rate of no less than 4 percent.

That promise was wildly out of step with historical averages – going back to 1968, only one president, Bill Clinton, averaged 4 percent growth over a four-year term. And Jeb based his guarantee off his experience as governor of Florida, when he averaged 4.4 percent statewide growth on the strength of a perilously large housing bubble that catastrophically popped shortly after he left office (somehow that detail never made it into the campaign literature). Regardless, “four-percent growth” was the mantra of Jeb the incurable optimist.

Well, as it turns out, ol’ Jeb was nothing but a piker. Four percent? That’s a loser’s goal. Because here comes Ted Cruz, the last man standing between Donald Trump and the Republican nomination, promising America that under his watch the economy will zip along at “a minimum of five-percent GDP growth.” Five percent! As you might guess, that’s an even rarer accomplishment than Jeb’s guaranteed 4 percent. Harry Truman enjoyed 6.5 percent average growth in the post-war economic boom; the Kennedy-Johnson administration of the early ’60s cleared 5 percent average growth; and since then no president has broken the 5 percent barrier for a single term. Cruz is promising not just to break that trend but to deliver sustained growth at or above 5 percent.

How’s he going to get there? Well, Ted Cruz has a plan. Per CNN: “Cruz says it's about going back to Reagan-style economics: cut taxes, scale back regulation on business and repeal Obamacare.” Ted Cruz’s tax plan is unique in that it represents the most radical and aggressive upward redistribution of wealth of any of the plans offered by 2016 Republicans. His big idea is to completely restructure the tax code in such a way that the wealthiest Americans will reap massive windfalls. “The overwhelming majority of the plan's cost (79.6 percent) goes to helping the richest fifth of taxpayers,” Dylan Matthews noted at Vox: “43.7 percent goes to the top 1 percent alone.” And as Bryce Covert writes at ThinkProgress, the assumption at play here – that colossal tax cuts for the wealthiest will trigger massive economic growth – is not backed up by research. What Cruz’s tax cuts will do, however, is explode the national debt by more than $10 trillion in the first decade, according to the Tax Policy Center.

But Cruz has an influential ally in his corner: Art Laffer, the high priest of trickle-down economics, who helped craft Cruz’s plan. “Cruz's tax plan is better than Reagan's,” Laffer told CNN. “I think you'll get growth rates higher than Reagan's.” A good rule of thumb is that whenever you see Art Laffer extolling the amazing economic impact of a tax-cut package, assume the opposite will happen.

Laffer’s time as a Cruz tax advisor was preceded by a high-profile stint as tax advisor to Kansas Gov. Sam Brownback, who came into power by promising to turn the state into a laboratory of trickle-down economic theory. With Laffer’s help, Brownback passed a tax package that knocked out taxes on small businesses and deeply cut rates across the board. Appearing with Brownback to hype the tax scheme, Laffer confidently predicted it would succeed beyond everyone’s wildest dreams. “This will lead to enormous prosperity,” Laffer told a group of Kansans in 2012. “You are moving into the pro-growth world, and believe me it will work.”

It did not work. The cuts predictably sent the state into a budget crisis as it scrambled to cover a series of massive deficits. To pay for these tax cuts, which overwhelmingly benefited the wealthy, Kansas imposed deep cuts to social programs and passed new consumption taxes that disproportionately affect the poor. And what did Kansans get for all this pain? Not much:

As for Laffer, he later clarified that when he said the tax cut plan would bring “enormous prosperity,” he didn’t mean it would happen immediately. “You have to view this over ten years,” he told a Kansas City Star columnist last October. “It will work in Kansas.” That, unfortunately, directly contradicted what he wrote in a 2012 report stating that he “advised Oklahoma, Kansas, and other states to cut their income tax rates if they want the most effective immediate and lasting boost to their states’ economies.”

Now we’re supposed to trust Art Laffer when he says that Ted Cruz’s tax plan will bring wild economic growth that will outpace even Ronald Reagan’s economic record, which has become the stuff of mythic exaggeration among conservatives. I suppose that’s the great thing about trickle-down economics – its failures can always just be papered over with more and more extravagant promises.