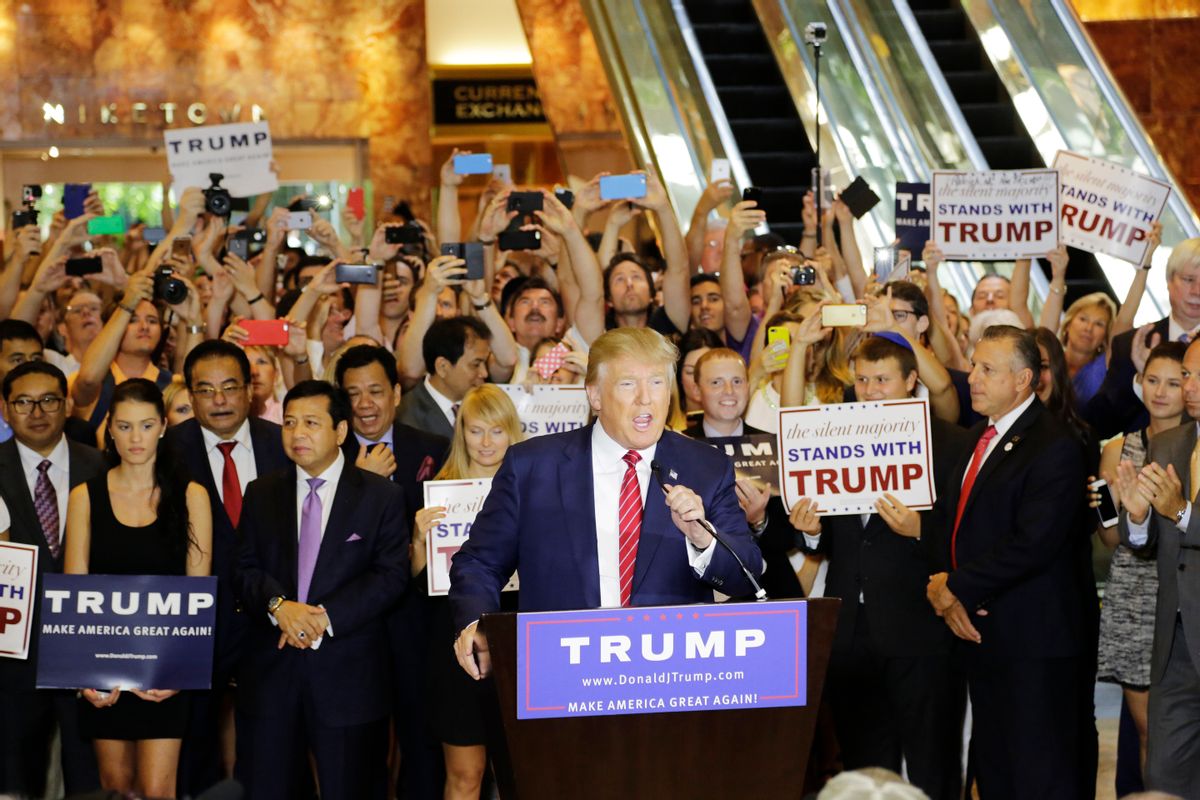 FILE - In this Sept. 3, 2015 file photo, Republican presidential candidate Donald Trump holds a news conference in the lobby of Trump Tower in New York. Days before New York's presidential primaries, the 58-story tower in midtown Manhattan is a cross-section of the world, alive with chatter about the Republican front-runner. People mill around the massive marble entrance floors, sprinkled with boutiques and eateries all bearing his gold-lettered name. (AP Photo/Mark Lennihan, File) (AP)
--

In July the Republicans will hold their nominating convention in Cleveland. And every week, to the delight of Democrats, the prospect of a bitter, party-destroying fight becomes a little more inevitable.

Donald Trump has received more votes and won more elections than any other candidate. But his delegate count has not scaled with his vote totals, and that's because he's being out-maneuvered by Ted Cruz. In Colorado, Wyoming and elsewhere, the Cruz campaign has won the behind-the-scenes delegate battle.

Trump will not go quietly, however. He's become more vocal in recent days, warning the RNC of the consequences they'll face if they undermine him at the convention. “The Republican National Committee, they'd better get going,” Trump said over the weekend, “because I'll tell you what: You're going to have a rough July at the convention. You'd better get going, and you'd better straighten out the system because the people want their vote.” And this was after Trump published an op-ed last week in The Wall Street Journal, protesting the GOP's byzantine process.

This escalating feud will only get worse. Despite his electoral victories, it's increasingly unlikely that Trump will reach 1,237 delegates before the convention. Trump now has 744 delegates compared to 545 for Cruz. With 852 delegates remaining, Trump's odds of avoiding a contested convention are shrinking every day, particularly in light of Cruz's organizational advantage.

The tone of Trump's campaign has shifted, a sign that he sees the writing on the wall. Nebulously bashing the “establishment” was always Trump's shtick, but now he's making a concerted effort to critique the whole “system.” “Look, I used to be the ultimate establishment person,” he said Saturday. “I was like the perfect person. I gave massive campaign contributions to everybody...But I saw the system, and the system is not working. And the system is all rigged, as far as the delegate stuff is going...it's not fair to the people...It's a bad system, it's a dirty system, and we're going to do something about it.”

To be clear: Trump doesn't give a damn about the justness of the system; he's just whining about losing the ground game battle against Cruz. Still, though, he has a point, and he's clearly going to make this as painful as possible for the GOP.

Of course this isn't really about the rules. Indeed, Manafort contradicted himself in that same interview when asked why his candidate is complaining “about the rules.” Trump is “complaining about the system,” he said. “That's the point that keeps getting lost here...We're trying to let the voters decide, members of the Republican Party, independents, decide who the Republican nominee should be – not the party bosses. That's the system of the 1920s, not 2016.” The problem, however, is that this is the system of 2016, and the process was never as democratic as Manafort implies. The people should have the final say, but there's nothing new or unprecedented about the present arrangement. Trump's team can't argue that the system is being rigged against them. The system was always rigged. If Trump wasn't running an amateurish campaign, I suspect we wouldn't hear anything from his campaign manager about the "system."

In any event, the inevitability of a brokered convention has already resulted in internal clashes within the Republican National Committee. As Politico reported Sunday, an influential RNC official “has accused his own party leadership of a 'major breach of trust' in trying to block a rule change that he said would make it harder to reopen the GOP nomination fight at a contested convention this summer.” The proposal at issue was introduced by Solomon Yue, a RNC member from Oregon. If adopted, it would make it more difficult for party elites to “draft a so-called white knight at a deadlocked convention.” Veteran Republican operatives have made it clear that all bets are off if this thing goes to second ballot or beyond, and so the possibility of shoehorning someone like Romney or Paul Ryan into the process looms large.

All indications are that Yue's proposal, and others like it, will be summarily dismissed by RNC leadership. This sets the stage for a massive fight in Cleveland. Both Trump and Cruz will oppose any attempt to nominate a candidate who didn't run for president. If it comes to that, and it very well may, expect plenty of fireworks – or, as Ted Cruz put it, a “ manifest revolt.”