"There's not a rock station I'd ever, ever put on": NPR's Bob Boilen finds brilliance in podcasts instead

Salon talks to the All Songs Considered host about Tiny Desk Concerts, The Beatles and music that changes your life 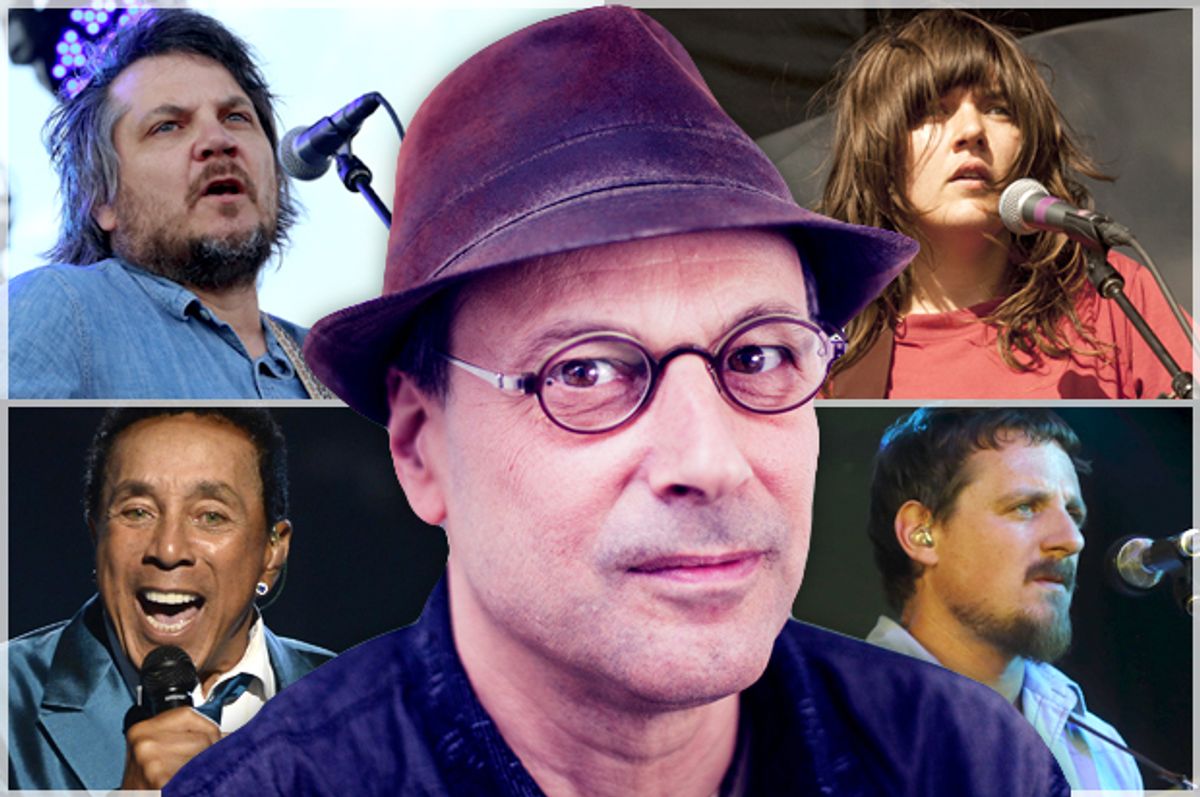 So many Baby Boomers never stretch out from their passion for the music of the ‘60s and ‘70s to find what else is cooking. NPR Music host Bob Boilen has maintained an enthusiasm for new sounds and passed it on in the show “All Songs Considered” and its live (and often crowded adjunct), the Tiny Desk Concerts.

Boilen’s stuffs his new book, “Your Song Changed My Life,” with conversations with musicians about their musical inspirations and influences. His selections are about what a frequent listener to public radio would expect – safe but also reasonably eclectic. Among them are Sleater-Kinney’s Carrie Brownstein, Philip Glass, Sturgill Simpson, Courtney Barnett, Smokey Robinson, Lucinda Williams and Wilco’s Jeff Tweedy.

The book begins with an introduction about the impact The Beatles’ “A Day in the Life” made on the young Boilen, who went on to work at record stores, fall for the music of Patti Smith, and become a musician and music journalist. He’s hardly the first to tell this kind of story, but the personal framing makes even hearing about the glories of “Sgt. Pepper’s Lonely Hearts Club Band” sound fresh. The rest of the book is like that: There are few shocks, but a lot of intelligent discussion from someone whose commitment is entirely unfeigned.

Boilen spoke to us from the NPR offices in Washington. The interview has been lightly edited for clarity.

I think we probably assume when we come to a book like yours that musicians would fall for the kind of music that they end up making themselves—that a punk rocker would fall in love with the Clash or the Sex Pistols, for example. But what were some of the surprises you found?

Colin Meloy of the Decemberists picked Hüsker Dü. [Laughs] Like, make that connection. A couple more that were out-of-this-world crazy: Trey Anastasio picking "West Side Story" was like, really? Seriously? How is that possible? James Blake picking Sam Cooke.

I spent time interviewing each artist and talking about the song and their life and history, but then I would take the song and start to think and dig and wonder, "What's the connection? Where is James Blake connected to Sam Cooke?" And, actually, now I can't separate the two, because if you hear James Blake's little moan at the beginning of "Retrograde" and then you turn on a Sam Cooke record, you go, "Oh my god, of course!" He grew up on Cooke.

It's also hard to imagine anyone who loves music not responding to Sam Cooke's voice. He just had one of the greatest voices of all time.

You bet. But really, Blake's earlier stuff was more instrumental electronica. He didn't really have a "voice," and used Sam Cooke, a pretty obscure record called "Trouble Blues," not any of the hits, to help him find his own voice. That's kind of cool.

You're best known for your work on NPR, but you've also spent a lot of time in record stores. Do you still seek out good record stores and scholarly record store clerks?

The answer is not really, which is sad. I was at Rough Trade Records the other night in Brooklyn, but the truth is that I get as many records sent to me in a given day that probably came out in a year when I was a teenager. So going into a record store is overwhelming and I already am overwhelmed.

What I do miss, though — and walking into Rough Trade the other night when I was going to see Asaf Avidan, this amazing Israeli player who actually tells a story in my book about Leonard Cohen, made me realize how much — I miss holding a cover in my hands and choosing an album completely by the cover. I'm in a different world now, where things just get sent and I listen fairly blindly to music to be as objective as possible. I do miss that nice surprise of making the connection between the art chosen on the cover and the art recorded on the music. So it's a little sad.

You've got a real range of musicians in the book. What kind of a mix were you going for?

Every one of these artists—with the exception, I daresay, of Trey Anastasio—I was madly in love with. [Laughs] With Trey's music, I was a super admirer of his skill, his craft, his band's relationship with fans, which is something in the bigger scope of things I'm really in love with. I love when artists have a following and when the artist and fan following is like a community and not just like stars. I like the mutual benefit that both get from concerts, so I wanted to talk to him and then wound up falling in love with how he and their band make music and what inspires him.

Like I said, he picked a song from "West Side Story" of Leonard Bernstein's, and you couldn't think of anything more far apart, but he explained it to me. What was so cool is that he's really into the notion of improvisation and music theory, and they go hand-in-hand. I think of composition and improvisation as two different skills, but the way Trey words it is, "If you don't have the understanding of how music works, then you can't as a player drop the thinking side of your brain and just play. You're always trying to think of, 'Oh, what would go good here.' But if you've got it as part of your DNA, you're golden." And that's what he does and that's what's so cool about his band and the different projects he has.

You've brought in groups of all kinds for Tiny Desk concerts. What kind of bands work best in that setting?

We have a restriction. It's a weird one, but it's purposeful on my part. We don't amplify the voice into the room. It's in an office at NPR. It's where I work, it's literally my desk. People from NPR and their friends will come and watch a Tiny Desk concert, and we'll certainly mic the singer so that we record the singer's voice, but we don't amplify it into the room. There's no PA. So the rule is that the band can't play louder than the singer can sing, because they all have to hear each other. We don't use monitors or PAs. So maybe a punk band or a thrashing, loud band who's dependent on their volume for emotion might have a harder time making it work.

Then again, the Tiny Desk that went up today was the Serotones. They were actually fairly loud, but AJ Haynes has got a belting voice that you can tell has a gospel root to it and a garage rock root to it, so it worked. The other thing that works well is bands who actually listen to one another. You might think, "Well, of course they listen to one another," but the truth is a lot of young bands have only learned to play music when the volume is loud and when they have their own monitor mix in their ear or in front of them, and they don't listen to all the nuance. When they're at my desk, it's all about nuance. If they don't know how to play off one another when they're quiet, it can fall apart. We've had a 23-piece marching band here and we've had solo acts—a wide variety can work, but it's a listening skill set.

Have you ever had Gillian Welch and David Rawlings?

We did, but I actually missed the day they were here. They were at my office but I wasn't there at the time, which is unusual, I've missed a handful or two. But I love them, and they've got that skill for sure.

You begin the book with an essay about listening to the Beatles as a kid and the power of that music for you. Do you still go back to the Beatles more than any other band?

My day-to-day is mostly filled with listening to music I've never heard before, so I'd start there. On my weekends I pull out my vinyl for some comfort, and it wouldn't be terribly unusual for me to pull out the Beatles because I dearly, dearly still find them an inspirational band, which is kind of amazing after all these years. But I'm certainly not stuck in the past by any means, which is the unfortunate part of a lot of my generation—not only my generation but every generation—who falls in love in their teens and college days and doesn't go any further.

In some ways I feel a little sad for that, because this generation of music is every bit as good as any of my generation's music. The only difference is that hormonally we're not as susceptible to being bowled over when we're in our fifties and sixties as we might be when we're in our teens and twenties. I love the music that's happening today, but yeah, I do go back and listen.

What blows my mind still—and I have to say this may be true of my generation more than any other—is that the difference in change between a band's record in 1964, let's say "Meet the Beatles," and then "Sgt. Pepper's Lonely Hearts Club Band" three-and-a-half years later. Think of what happened to that band and what happened to that music. You don't hear that sort of change too often in bands anymore. It's usually a slow progression. And also remember that bands in 1964 put out two albums every year usually and sometimes more, maybe even a soundtrack for a movie. The touring was not like, "Let's do a record and then two-and-a-half years later after the tour we'll go do another." It was record, record, record, just all the time. You couldn't not be on the airwaves.

Another thing that's changed immensely since the Boomer heyday is radio. When you started listening to radio it was mostly AM. In 2016 radio is better in some ways and worse in others. How does it seem to you?

It depends on what we're defining as radio anymore. If you think of it as terrestrial radio that comes out of a big stick in the ground, then I'd say with the exception of a handful of fortunate cities it's pretty depressing. I live in a city that doesn't have any radio that I listen to very often. There's some great jazz, but there's not a rock station I'd ever, ever put on. There are public radio stations and college radio stations, but I don't have any of that where I live, and haven't had it since Georgetown University shut down their radio station in 1979.

But if you think about radio as a voice and music coming out of any device, and not tying it to a stick in the ground, then in some ways radio is better than ever. So I guess it depends on the definition. There are brilliant podcasts out there. There are people playing music they're passionate about and not what they're told to play. You hear funny interviews with musicians. It just depends on how you want to define it. I'll say that if it's an audio medium I think of all of it as radio. You can put it under your pillow, or, you can be intimate with it, and I think it's sort of better than ever.