3.2 million shut out in NYC: Listen to Board of Elections tell resident "You cannot vote today being an independent" 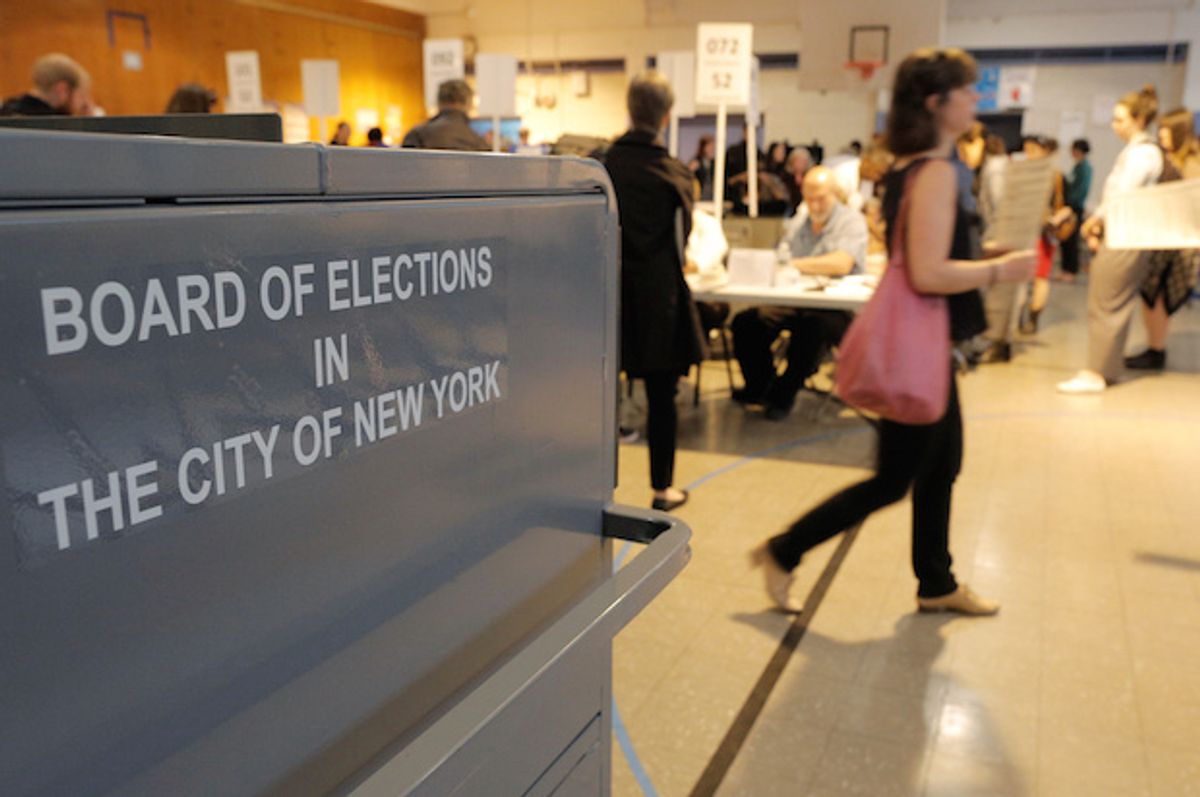 People vote in the New York primary elections at a polling station in Brooklyn borough on April 19, 2016 (Reuters/Brendan McDermid)
--

Today, April 19, is the New York primary. It is one of the most important days in the presidential campaign, and can have an enormous impact on the election, potentially helping to give Bernie Sanders the further momentum he needs to challenge firmly entrenched establishment forces, or conversely cementing Hillary Clinton's status as the "inevitable" nominee.

More than one-quarter (27 percent) of New York's registered voters, however, are unable to vote in this critical primary today. 3.2 million New Yorkers cannot participate, because they are registered either as independents or with third parties.

New York is one of 11 U.S. states that has a closed primary system, which effectively guarantees that the Democratic and Republican Parties control electoral politics.

Another 63,558 registered Democrats in Brooklyn were mysteriously unregistered in recent months, and therefore stripped of their right to vote in the primary. No city or state election official could explain why to WNYC public radio.

A group of New Yorkers whose party affiliations suddenly changed even filed a lawsuit yesterday in an attempt to pressure the state to return their right to vote.

As The Nation put it, New York has "some of the worst voting laws in the country."

If voters want to participate in the New York primary, they had to register for one of the two major parties in October — six months before. At this time, few people thought Sanders would have had a chance. In recent months, an enormous grassroots movement has emerged behind Sanders, and he has a real chance at defeating the Clinton machine.

Closed primaries have disproportionately hurt Sanders, who is significantly more popular among independents than his rival. In fact, the Vermont senator has been continuously elected for decades as an independent, and says he commiserates with those unable to vote today.

Some media outlets reported this week, nevertheless, that there could be a possible way around the restrictions on independent and third-party voters. Gothamist wrote that New Yorkers who have fallen through the cracks can "try to get a court order stating you should be allowed to vote in a certain party's primary."

"As difficult as this sounds, the city Board of Elections actually stations judges at offices in each of the boroughs on Primary Day to do exactly this," Gothamist reported. A spokesperson provided the news website a list of locations and hours judges will be present in New York City's different boroughs.

I called the Board of Elections' Brooklyn office this afternoon and asked if this is indeed possible. They put me on hold for several minutes before telling me to call the main office of the New York City Board of Elections, in Manhattan.

I proceeded to call the main office, asking if I could try to get a court order, or if there was any other way I could vote in the New York primary. I was firmly rejected.

The Board of Elections office strongly denied that there was any way for me to vote, stating bluntly, "You cannot vote today being an independent."

"There's no potential way?" I asked. "There's no way," the office spokesperson replied, before abruptly hanging up.

Listen to the phone call below. A transcript of the exchange follows.

BOARD OF ELECTIONS OFFICE: Board of elections.

ME: Hi, I'm a registered independent, and I read in media reports that it's possible to potentially get a court order—

ME: So you've heard that from other people as well?

BOARD OF ELECTIONS OFFICE: Umm.

ME: No, because I've seen it, actually, in a few different media reports. They've said that—

BOARD OF ELECTIONS OFFICE: I'm telling you, this is the Board of Elections, and I'm telling you what's true and what's false, and you cannot vote today being an independent. Okay?

ME: There's no potential way?

BOARD OF ELECTIONS OFFICE: There's no way. Okay?

BOARD OF ELECTIONS OFFICE: None.

[Board of Elections spokesperson abruptly hangs up]