"Iraq all over again": Al-Qaeda is winner of U.S.-backed Saudi war in Yemen, says renowned journalist 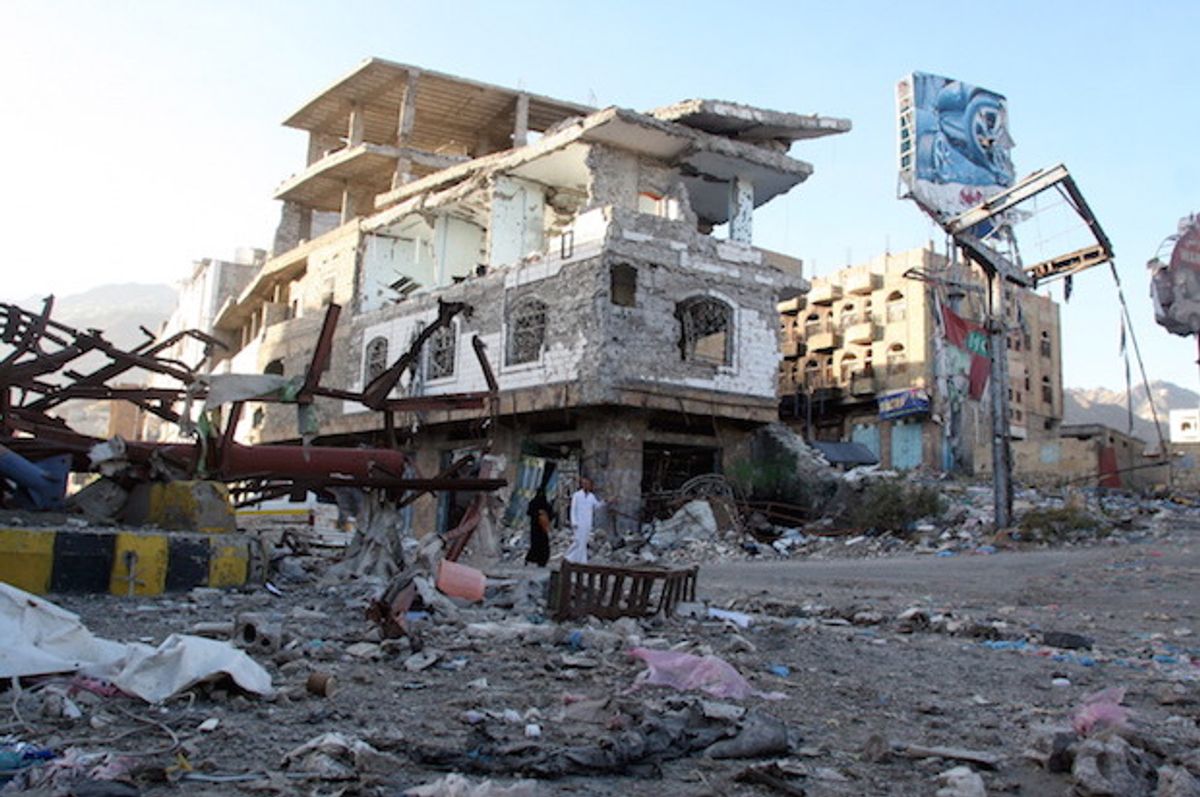 "They have done it again. The U.S., Britain and regional allies led by Saudi Arabia have come together to intervene in another country with calamitous results," writes renowned Middle East reporter Patrick Cockburn in a recent article.

"They have produced chaos, ruining the lives of millions of people and creating ideal conditions for salafi-jihadi movements like al-Qaeda and Islamic State."

Cockburn is speaking of the war in Yemen, a conflict that is little-discussed in the U.S., but has tremendous importance in the Middle East.

Since March 2015, Saudi Arabia has waged a brutal war on Yemen, the poorest country in the Middle East.

In the name of fighting Yemen's Houthi fighters and rebels loyal to former President Ali Abdullah Saleh, a coalition led by Saudi and armed and supported by the U.S. and U.K. has bombed numerous Yemeni cities, shelling civilian areas including neighborhoods, hospitals, schools, weddings, an Oxfam humanitarian aid warehouse and even a refugee camp.

Cockburn joins a growing list of analysts and experts who argue that the party that has gained the most from the war in Yemen has not been Saudi Arabia and its Western allies, but rather extremist groups like al-Qaeda.

"The real winners in this war are al-Qaeda in the Arabian Peninsula (AQAP) which has taken advantage of the collapse of central government to create its own mini-state," he writes.

AQAP has long been one of the most violent and feared branch of the extremist group. It has ruthlessly killed opponents, and even sometimes crucifies those whom it kills, hanging them from bridges.

Ansar al-Sharia, a local wing of AQAP in Yemen, flies the ISIS flag. Some members of the extremist group have left and joined ISIS.

Now, Cockburn explains, AQAP controls a 340-mile area on the south coast of Yemen, where it has created its own government of sorts with tax revenues.

Just as the war has received little coverage in U.S. media outlets, its catastrophic consequences have been even less acknowledged.

"Unnoticed by the outside world, AQAP has been swiftly expanding its own statelet in Yemen in 2015/16, just as ISIS did in western Iraq and eastern in Syria in 2013/14," he continues.

"The dire consequences of the Saudi intervention and the rise of AQAP has been largely ignored by Western governments and media," Cockburn explains in the article, published Friday in the British newspaper The Independent.

"Contrary to their grim-faced declarations about combating terrorism, the U.S. and U.K. have opened the door to an al-Qaeda mini-state."

In the article, titled "Thanks to U.K. and U.S. intervention, al-Qaeda now has a mini-state in Yemen. It's Iraq and ISIS all over again," Cockburn criticizes the U.S. for underestimating the threat of ISIS in Iraq and Syria, just as Washington and London underestimated the threat of AQAP in Yemen.

He also notes how the war has inflamed sectarian tensions in the country.

Yemen has large Shia and Sunni Muslim populations, "but it is only recently that sectarian hatred has begun to get anywhere near the level of Syria and Iraq," he explains.

"Saudi Arabia portrays the Houthis as pawns of Iran, though there is little evidence for this, so Yemen is drawn into the regional confrontation between Saudi Arabia and Iran."

Investigative journalist Gareth Porter has debunked claims that the Houthis are armed by Iran, although Western media outlets frequently misreport this.

At least 6,400 Yemenis have been killed in the war, according to U.N. estimates, but this is likely a very conservative figure. At least half of those killed have been civilians.

Human rights organizations have accused the Western-backed Saudi-led coalition of war crimes. The coalition has dropped U.S.-made cluster bombs, which are banned throughout much of the world, on civilian areas.

For several months, human rights organizations have warned that at least 82 percent of the country's roughly 26 million people have been in dire need of humanitarian aid.

More than half of the country, 14 million people, face hunger, and the U.N. has warned parts of the country are on the brink of famine.

An additional 2.5 million Yemenis, around 10 percent of the population, have also been displaced.

Cockburn has reported from the Middle East for Western newspapers for decades. He is known for being an expert on Iraq in particular, and has written multiple books on the country.

His book "The Jihadis Return: ISIS and the New Sunni Uprising" is one of the most respected accounts of the rise of ISIS and other extremist groups.

Pulitzer Prize-winning journalist Seymour Hersh has described Cockburn as, "quite simply, the best Western journalist at work in Iraq today."

Unlike many of his peers in Western journalism, Cockburn was reporting on Iraq for long before the 2003 U.S.-led war. He is one of the leading specialists on the history of al-Qaeda.

Cockburn argues that the extremist group is expanding in Yemen so quickly not necessarily because it is very strong, but because the Saudi and U.S.-backed forces are weak and incredibly unpopular among the population.

"In reality, the weakening or destruction of central government created a power vacuum promptly filled by extreme jihadi groups," he writes.

Presidential candidate Bernie Sanders has warned in multiple presidential debates of the same consequences, blasting U.S. regime change policies that have left countries like Iraq and Libya in disarray.

Cockburn warns the disaster in Yemen could have horrific consequences for the West, because, when extremist groups like al-Qaeda and ISIS carve out territories and implement tax systems, they can fund terrorist activity around the world.

The chaos and destruction left in the wake of Western-backed wars in Iraq, Libya and Syria have turned the countries into hotbeds for extremism where militant groups like al-Qaeda and ISIS have flourished.

ISIS itself emerged out of the catastrophic U.S.-led war in Iraq, which led to the deaths of at least 1 million people, according to a report by the Nobel Prize-winning International Physicians for the Prevention of Nuclear War.

Former British Prime Minister Tony Blair has admitted that the war he backed in Iraq led to the rise of the murderous, fascistic group.

Cockburn concludes: "As has happened repeatedly since 9/11, the U.S. and countries like Britain fail to combat terrorism because they give priority to retaining their alliance with Saudi Arabia and the Gulf monarchies, even when their policies — as in Yemen — wreck a whole country and enable al-Qaeda and ISIS to use the chaos to establish safe havens."

Ironically, military intervention under the aegis of the U.S.'s so-called War on Terror has frequently led to the spread of terror throughout not just the Middle East, but throughout the world as a whole.