The new showrunner wants to boost ratings, but here's hoping this fluffy Hillary Clinton interview was an anomaly 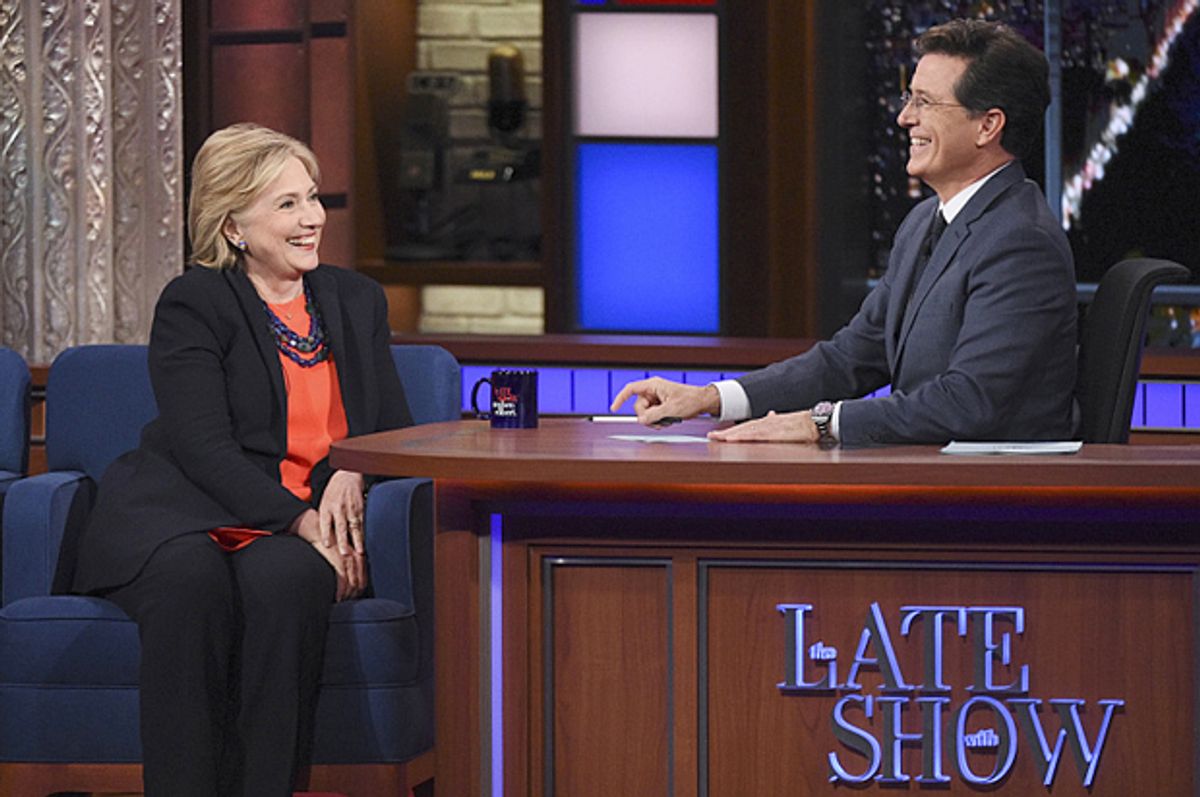 Some nights, “The Late Show With Stephen Colbert” is not only the funniest thing on late night, it’s the most intelligent political show on television. Between Colbert’s political jokes and his interviews with politicians, he’s extended the best things about “The Daily Show” better than any of the show’s other alums.

The show is still funny, and Monday night's installment hit a pretty high point musically: two songs by Sturgill Simpson (including a Waffle House-themed duet with Colbert) and Wayne Shorter sitting in with the show’s house band, Stay Human.

Some of them were quite small. Variety sums them up this way:

Yes, the host still came on and delivered jokes and made the usual nod to his bandleader, Jon Batiste, and his band, Stay Human. But the show opened with the video introduction that typically comes after Colbert has run out on stage and made a few jokes. The opening segments seemed quicker and tighter. And the host teased what he called an “exclusive” interview in a restaurant with Democratic Presidential candidate Hillary Clinton during which they discussed the merits of cheesecake.

The “exclusive” bit is the kind of earnest, hype-y framing that clashes with Colbert’s natural style. He was probably told to call it that, but he couldn’t quite put it across with a straight face.

The Hillary Clinton interview itself was a pretty significant divergence from the way Colbert typically speaks to pols. It was perfectly watchable television, and Clinton’s people are probably happy to see her funny, maternal side highlighted: The two talked about Bill’s veganism, Hillary’s role as a grandmother (“Are you cool Grandma?”), and other lighthearted subjects while the two dined at the Carnegie Deli.

If this was a Jimmy Fallon interview, it would have been perfectly fine. But Colbert typically digs into substance a lot more than this. Starting the interview with, “What is the worst thing you’ve had to eat at a public event?” and leading into talk about food on a stake was not bad – but the interview mostly stayed in goofy land. Colbert is a comedian, of course, but he’s also a skilled interviewer who knows how to make a connection, get more serious, and keep a subject focused on heavy issues when he needs to. But besides a bland statement from Clinton about how she can work with Republicans, this was an interview with a politician with almost no politics.

At the very least, it was a fairly weak way to lead into the New York primary – the political version of empty calories. (We do have a fairly important presidential race going on, last time I checked.)

Colbert’s celebrity interviews -- with actor Jesse Tyler Ferguson and actress/singer Katharine McPhee – were breezy and fun. The show is still entertaining and watchable; no showrunner would change that.

As Colbert’s show, which has lower ratings than its rivals, moves forward, Licht and company will probably be trying out little alterations to bring in viewers. Some of them may be improvements. Licht is a smart guy and well-regarded for his work in morning television.

But Colbert is its own weird hybrid of politics and entertainment, funny and serious. Veering closer to Kimmel or Fallon territory – or to a crisp, well-paced morning show – sounds like a way that the show surrenders what makes it distinctive.

There’s no way CBS will leave the program alone; late night has become too valuable a piece of real estate. Here’s hoping that “The Late Show” holds onto its mojo and Colbert doesn’t become just another pretty face.