Colbert takes Clinton to a famous New York deli where he grills her on Bill's veganism: “He’s not a smug vegan?” 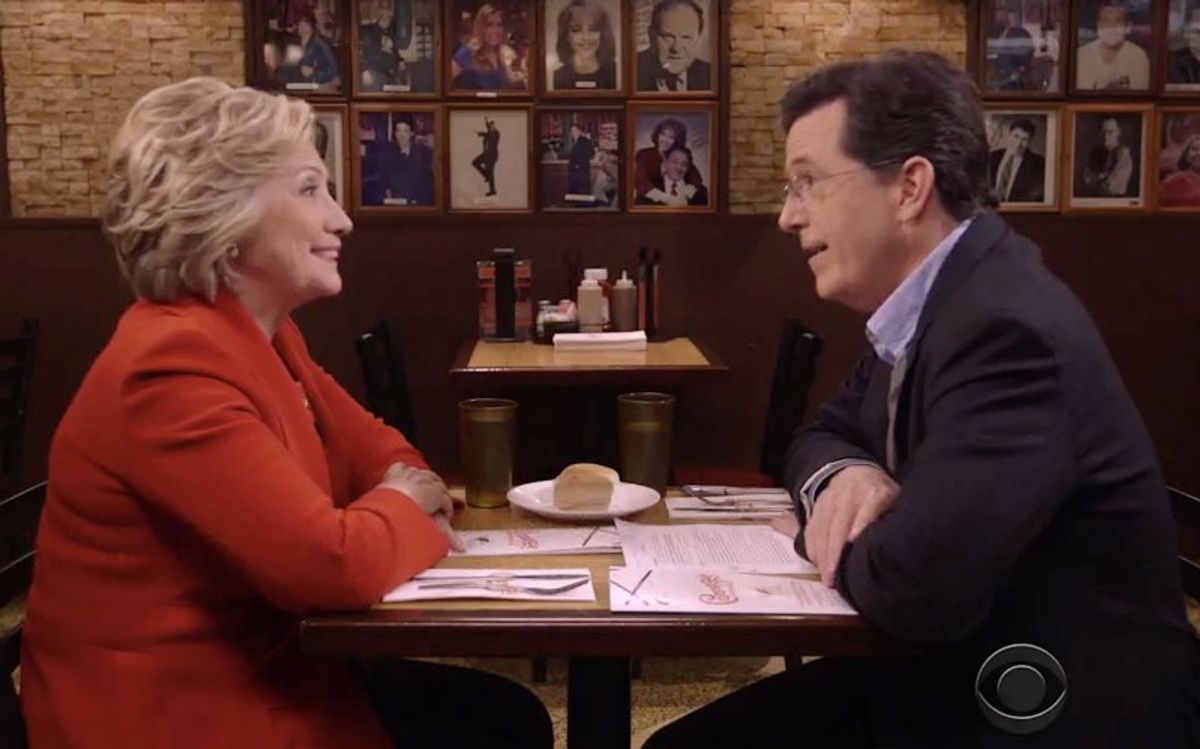 While campaigning in New York City last Wednesday, Hillary Clinton made a stop at the recently reopened Carnegie Deli in Midtown for a lighthearted chat with late-night host Stephen Colbert over pastrami sandwiches and cheesecake.

"I know that former President Clinton, your husband, is a vegan,” the "The Late Show With Stephen Colbert" host began at the 79-year-old restaurant famous for its gargantuan sandwiches. "Is he going to give you any grief on this, any friction, for eating meat?”

No,” a clearly amused Clinton responded.

“He’s really not,” Clinton assured him.

“I think that legally makes him not a vegan,” Colbert said. "He never says, like, ‘That sandwich had a face. That sandwich is somebody’s little baby,’” Colbert quizzed while showing off his best impression of the former president.

There was a brief effort to turn the talk serious when Colbert asked Clinton, “What do you have in common with your likely opponent Donald Trump. Other than the fact you both have beautiful daughters and you were both at his wedding?”

“[W]hen you are President and you’re working with the Congress, there are lots of opportunities to find common ground,” Clinton continued. “When I actually have a job as opposed to run for a job, I actually get things done with the Republicans. I did, as First Lady, as Senator, as Secretary of State,” she said. “This is just one of those efforts you just have to get up and work on every single day. You have to be willing to find whatever common ground exists and try to make something happen.”

Colbert later got back to the funnies when he asked Clinton if she thought her husband would force kale chips on their young granddaughter, before grilling her about her reluctance to eat in front of campaign cameras.

“It’s awkward eating in front of the press,” she confessed. “Cause they could get a funny shot, it could drop out of your mouth, smear on your face,” she explained to Colbert.

Noting her hesitation to eat a slice of cheesecake from Brooklyn's Junior's, Colbert decided to show Clinton how best to eat the New York staple. “You want to use a fork, take a little off the top,” he said, grabbing the huge slice in his hand and stuffing it in his mouth, setting Clinton off in a hysterical fit.

“This humanizes you in front of the press,” Colbert said to Clinton, his mouth filled with the creamy dessert, before insisting they split the bill.

Watch the humorous, albeit mostly substance-free, Colbert interview with Clinton ahead of today's New York primary: