Bernie has run his course: The Sanders campaign has stopped being about winning and is now mostly about whining

Sanders used to add value to the campaign, but lately, all he does is sow unjustified paranoia and anger 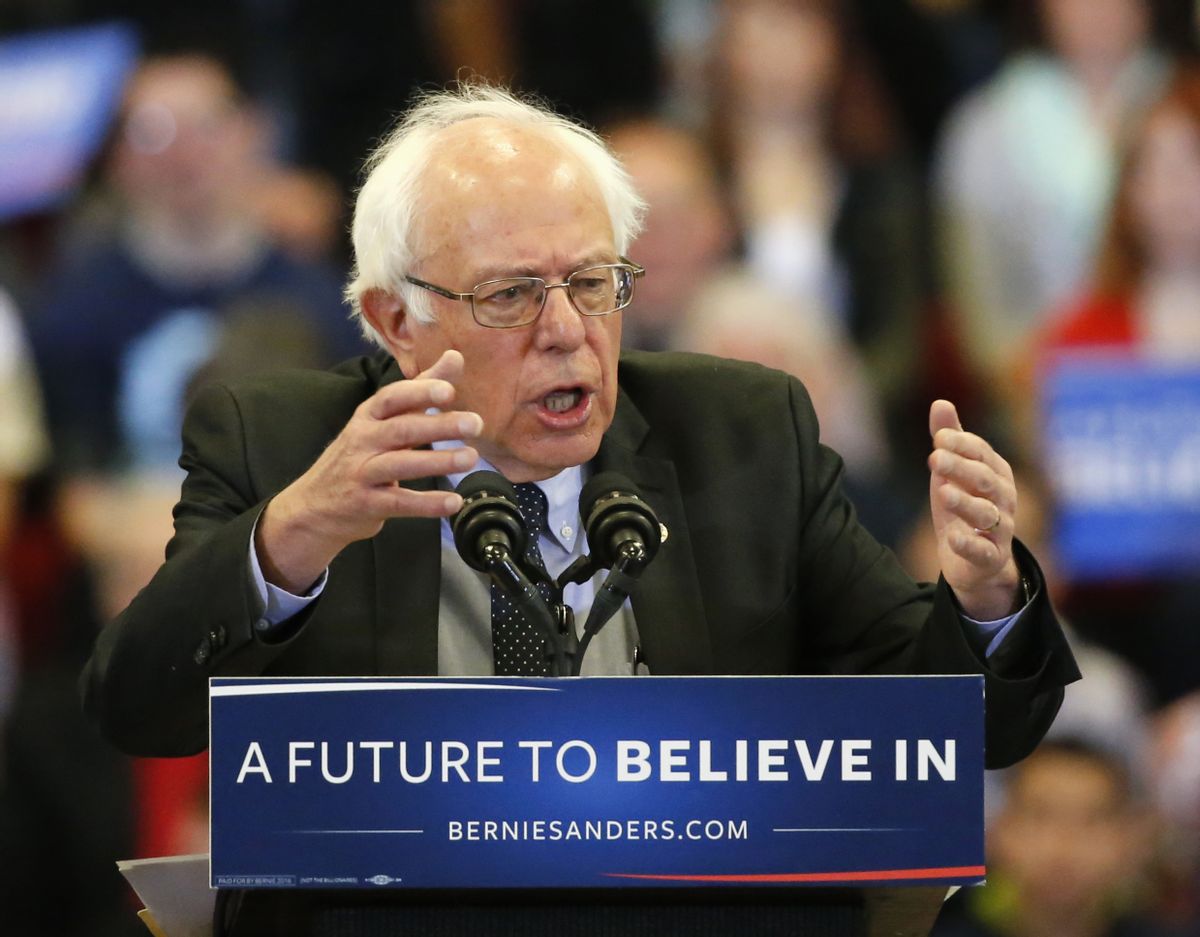 It's time for Bernie Sanders to admit that Hillary Clinton is winning the primary fair and square, and if he can't do that, it's time for him to quit.

Things have been getting sour for Team Sanders for weeks now, but, in the past week, the campaign took a decisive turn away from positive campaigning and actually trying to win towards focusing a baffling amount of energy on a futile narrative about how his losses don't really count.

I wish it were otherwise, but there's simply no nice way to put this. The Sanders camp has decided to focus on stoking half-baked complaints about process, complaints that don't serve to win a single vote to their side. Instead, it seems about Sanders and his supporters insinuating that Clinton is winning by cheating. The behavior is not the behavior of people trying to win. It's the behavior of someone who lost a hand of poker and is throwing his cards in his opponent's face and screaming about how unfair it is that the other guy drew a better hand.

Things had already been getting ugly prior to the New York primary, with Sanders trying to dismiss the Clinton wins in the "deep South" by saying, "That is the most conservative part of this great country."

This excuse is nonsense. The reason he "got murdered" (his words) there is not because Clinton supporters are conservative. (On the contrary, some polling shows more conservative Democrats vote Sanders over Clinton.) It's because the Democratic primaries in these states have a larger percentage of black voters, who turn out in greater numbers than Clinton, and Sanders knows it.

This is what Ed Kilgore of New York magazine calls "the some-voters-are-less-equal-than-others heresy", which is "that Hillary Clinton's primary victories should be discounted because they disproportionately depended on African-American voters in states Democrats are not likely to win in November."

Unfortunately for Sanders, simply believing that these primaries count for less does not make it so. When he arrives at the convention, if it does get that far, he will find that these delegates get as much of a right to vote as any others, even though he spent months dismissing their value.

All this does is stoke resentment amongst his white supporters and hurt the feelings of black voters, and to what purpose? The pleasure of seeing screaming matches get uglier on Twitter?

Things got even more bizarre going into the New York primaries. Polling made it a foregone conclusion that Clinton was going to win, leaving the Sanders campaign with two choices: Running a positive campaign focused on reducing margins or dumping a huge amount of time and resources into trying to argue that a win in New York doesn't really count because reasons.

Guess which one they chose? If you are a Democrat living in New York who has either a computer or a desire to leave the house on occasion, you probably know the answer to this.

The Sanders campaign spent the past week kicking up dust and trying to convince their supporters that the only reason for the inevitable New York loss is they were robbed.

The twofold strategy was to imply that Clinton and the DNC are somehow involved in voter suppression because New York has a closed primary and by hollering unintelligible nonsense about Clinton's victory fund and the work George Clooney did to raise money for it.

Neither of these arguments did one single thing to improves Sanders's chances. But they did a bang-up job of sowing suspicions that Clinton is somehow corrupt when she's not. That certainly isn't going to be a problem when she's running in the general election, is it?

The closed primary argument was especially laughable, because it was so obvious that the "outrage" that was spewing out on social media was ill-informed and self-serving.

To summarize: You have to be a registered member of a party in order to vote in their primary. To many people who had, right up until last weekend, never even given this fact a moment's thought, this became a grave injustice because, it turns out, they registered as independents and not Democrats and had no chance of voting in the primary. The outrage poured out and the rhetoric about "voter suppression" abounded.

This wasn't just some social media fancy, however. Sanders was happily stoking this nonsense. ABC News ran a video of Sanders and some bearded white guy in New York chattering about how much a bummer it is that non-Democrats can't vote in the Democratic primary, with Sanders intoning dramatically about how independent voters " have lost their right to vote". Which is blooey nonsense, since political parties are private organizations that your are free to join if you want, and these voters just chose not to.

If one can step away from the Sanders dramatics for a moment, the silliness of this becomes evident. I, for instance, would love to vote in the Republican primary and hell, any other party's while I'm at it. But that is unfair and undemocratic, because the purpose of primaries is for the members of that party to select the person they most want to run, a purpose that is thwarted when outsiders are allowed to come in and manipulate the system. If you want a voting stake in organization, be it the local food co-op or the Democratic Party, you should have to join first.

A similar thing is going on with the strum und drang over Clinton's victory fund. Victory funds are these dual-fundraising efforts where presidential candidates fundraise and whatever money they get that goes over their donor limits goes to the party or down-ticket candidates. So, if you want to write a $5,000 check to Clinton, she keeps what the law will allow and the rest goes to the party or other candidates.

The Sanders campaign sent out a letter that, while carefully avoiding any accusations of illegal behavior (of which they know there isn't any), suggested there was some kind of dirty tricks because the presidential campaign takes a bigger share of the fundraising than the party or down-ticket candidates. This was, as anyone sorry enough to venture online yesterday found out, was treated by Sanders supporters like some great discovery and certain proof that Clinton is a cheating cheater.

It's also all smoke and mirrors. For one thing, Sanders himself has a victory fund. He just hasn't bothered to fundraise for it, preferring to focus his energies on efforts where he gets to keep all of the money, instead of giving some away like Clinton does. How that makes him more selfless and noble, I have no idea.

Second of all, the whole purpose of throwing this dust up is to imply that Clinton is somehow buying this election. But the sorry truth is that Sanders outspent Clinton by a lot in New York, spending almost twice as much on TV ads. If elections can be bought so easily, Sanders should have had a blowout performance in New York, but he lost, by wide margins.

Invariably, when these points are brought up, Sanders supporters retreat to high-and-mighty justifications about greater transparency or the problems of too much money in politics. Which sounds good, but the fact that none of these concerns are mentioned in the same breath as the Republicans, who are the reason for campaign finance deregulation, gives the game away.

This isn't about high-minded values. It's not even really about winning the Democratic primary. It's about creating a narrative where Sanders and his supporters can feel like they would have won, except for the dirty cheaters who cheated them.

It's human nature to retreat to this kind of self-serving nonsense in the face of defeat, to be fair. And it wouldn't really be a big deal if Sanders would pack up his cards and go home to stew about how supposedly unfair it is that they let Southerners vote but don't let non-Democrats elect the party's nominee. Instead, these half-baked complaints are being poured out in public and feeding pointless rage and conspiracy theory thinking.

None of which will help the Sanders campaign win. On the contrary, this sort of behavior is bound to piss off the super delegates Sanders wants, but who probably don't like hearing how their party is supposedly corrupt. All this does is undermine the Clinton campaign by spreading misinformation.

The Sanders campaign did a lot of good for a long time, pushing Clinton to the left and drawing attention away from the Republican campaign. But now all he's doing is sowing pointless animosity. If he can't get back to productive work, it's time for him to retire this campaign.