Bigots get better coverage: Hillary can do no right in the eyes of our political press

The Democratic frontrunner has avoided Trump's nastiness at every turn. Her reward? The media's endless derision 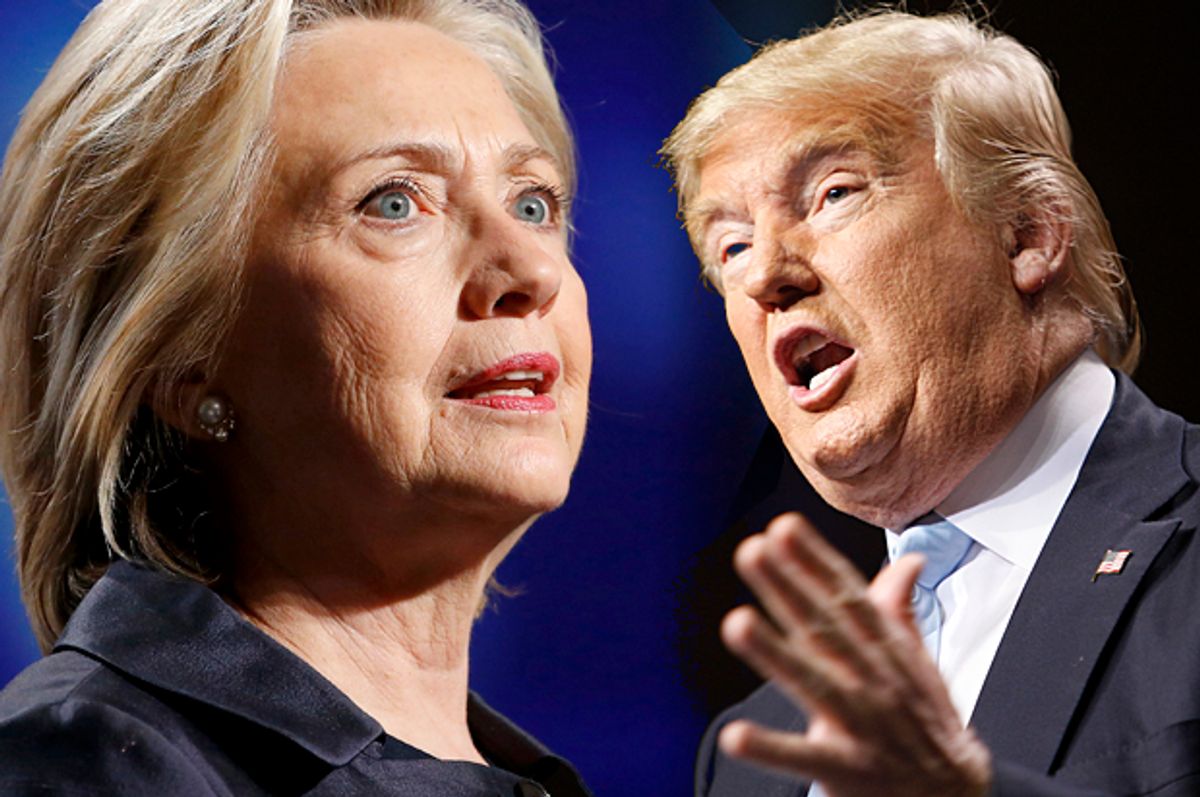 Sometimes this whole election season seems like a weird journalism experiment designed to determine just how out of whack Hillary Clinton’s campaign press coverage can become; how one-sided and nasty the media chronicling of her can be.

As the Democratic front-runner moves closer to likely securing the nomination and potentially becoming the first female president in United States history, the press prefers to often treat her campaign as a mess that's perpetually facing looming pitfalls and possible setbacks. (When not critiquing the volume of her speaking voice.)

The tone of the gloomy coverage should surprise no one who’s paid close attention to how the Beltway press has depicted Bill and Hillary Clinton over the last two decades. (Hint: With boundless snark and endless suspicion.)

The would-be experiment in 2016? Create a wildly boorish, bigoted and dishonest Republican candidate such as Donald Trump and compare his press coverage to Clinton’s. There’s no way the press would award someone like Trump with more positive coverage than Clinton, right? There’s no way the respected, traditional Democratic candidate would be saddled with more negative coverage than the Republican liar whose rallies are marred by physical violence and who has denounced reporters as “scum,” right?

As Vox noted, a recent study found that in ten major media outlets, more negative stories have been published about Clinton than any other candidate (including Trump) since January 2015. During that same period, Clinton has been on the receiving end of the smallest proportion of positive stories, according to Crimson Hexagon, a Boston-based social media software analytics company that conducted the study.

Clinton’s ratio of negative-to-positive coverage stands at approximately 10-to-1. I understand that Clinton’s White House run isn’t amassing glowing press clippings. That was never going to be an option for a national figure like her who’s always been a media target. (Last year there was open talk about how the press was primed to “take down” her campaign.)

As the graph indicates, all the candidates were hit with lots of negative coverage. But the most negative ratio for the candidate with the clearest path to the White House? That seems excessive.

Despite being poised for more large-state wins, the press has often presented her candidacy as floundering. In fact, for long stretches, the tone and tenor of Clinton's coverage seemed to mirror that of Jeb Bush's -- the Republican who ran a fruitless campaign and bowed out after winning just four delegates. (Clinton has tallied nearly 1,800 delegates.)

But for Clinton to be generating press reporting that’s less positive and even more negative than Trump’s is astonishing given the type of gong show campaign he’s been running.

The quantitative study by Crimson Hexagon represents one of several that will likely try to catalog the coverage for the candidates over the course of the campaign. As a rule, studies that attempt to code coverage as positive or negative are open to interpretation and shouldn’t be seen as the definitive word on campaign press behavior. But the fact that this one shows Trump’s press coverage to be even remotely similar to Clinton’s in terms of tone and tenor, let alone tilting towards being more positive than hers, is remarkable.

It’s remarkable because Clinton is running a serious and substantive campaign, while Trump is at the forefront of a misinformation circus and has unfurled countless red flags, like when Trump:

That doesn’t even address Trump’s pathological inability to tell the truth, matched by his categorical refusal to correct his preposterous falsehoods.

“There’s never been a presidential candidate like Donald Trump — someone so cavalier about the facts and so unwilling to ever admit error, even in the face of overwhelming evidence,” Washington Post fact-checker Glenn Kessler has noted.

And Kessler should know. He and his colleagues have been doing their best to detail the nearly endless conveyor belt of absurd and completely nonsensical lies that Trump has been spouting on the campaign trail. On their scale of one to four Pinocchios, the Washington Post has doled out a cavalcade of demerits, giving the worst possible rating to the following claims from Trump:

Politico also recently put Trump’s prevarications under the microscope. Combing through four-and-a-half hours of campaign speeches given during the first week in March, Politico found Trump averaged a misstatement once every five minutes:

His remarks represent an extraordinary mix of inaccurate claims about domestic and foreign policy and personal and professional boasts that rarely measure up when checked against primary sources.

So yes, some news organizations are digging into Trump’s misinformation and highlighting it, which remains an imperative. But the amazing part is that even with that horrendous record of lies and insults, Trump’s overall press coverage is still better -- it’s still more positive and less negative -- than Clinton’s coverage, according to the Crimson Hexagon study.