New York City Board of Elections to be audited: Widespread complaints of voting "irregularities" plagued the Big Apple's primary day 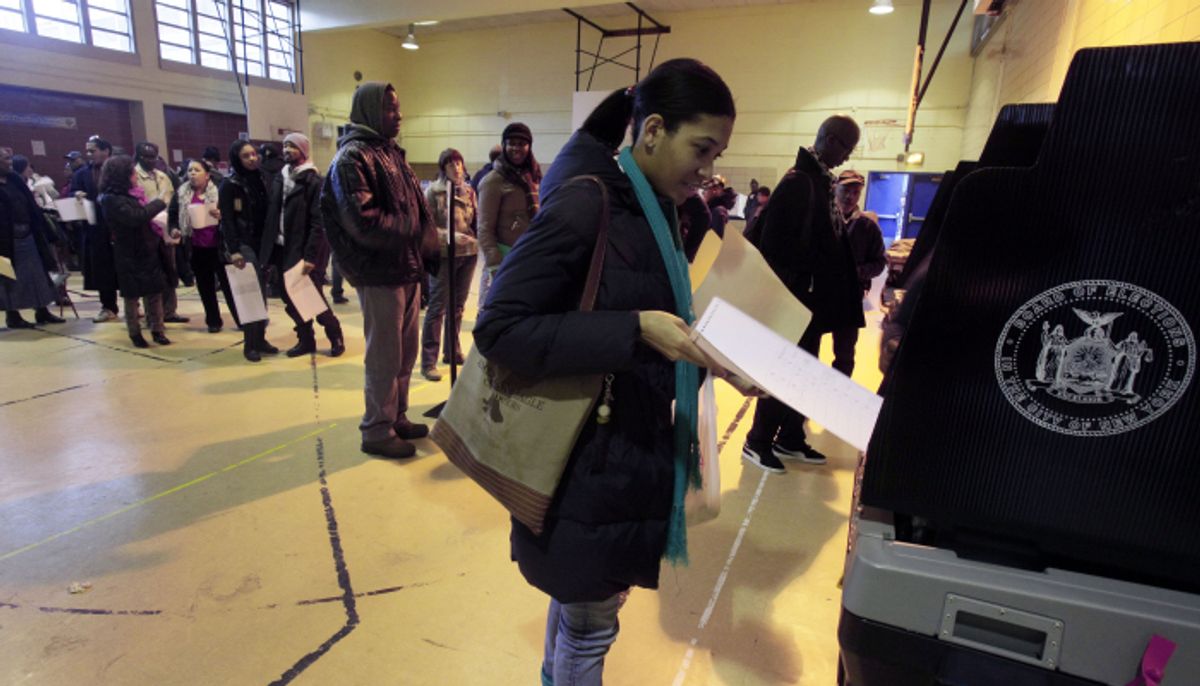 When early bird voters in the Queens borough of New York City arrived at one polling location Tuesday morning, they found all three voting machines out of order.

Nearly two hours after polls were supposed to open, some Brooklyn voters found themselves still waiting outside while officials scrambled to find poll workers.

One regiestered Republican voter at a polling location in the Lower East Side in Manhattan claimed she was handed a Democratic ballot because they didn’t have any for Republican voters.

"I then came back and... told them I was a registered Republican, and they instructed me that they had no ballots for my table but I could either come back or just vote affidavit," she told Gothamist. "The women in charge literally said, 'You're going to love this. They never delivered the Republican ballots. I'm a Democrat, but even I think this is a complete injustice’."

Between 6 a.m., when polls opened in New York City, and 3:50 p.m., a state voter complaint hotline received 562 phone calls and 140 emails, more than four times as many as in the 2012 general election, according to state Attorney General Eric Schneiderman.

But perhaps the biggest voting mistake to happen during the Big Apple's presidential primary day was the removal of 126,000 Brooklyn Democrats from the voting rolls.

Of the 126,000 Democratic voters removed from the rolls in Brooklyn, New York City Board of Elections Executive Director Michael Ryan said 12,000 had moved out of the borough, while 44,000 more had been placed in an inactive file after mailings to their homes bounced back. An additional 70,000 were already inactive and, having failed to vote in two successive federal elections or respond to cancel notices, were eventually removed.

“I admit that Brooklyn has had a lot of transient population – that’s obvious," Mayor de Blasio conceded Tuesday. "Lot of people moving in, lot of people moving out. That might account for some of it. But I'm confused since so many people have moved in, that the number would move that much in the negative direction.”

New York City Comptroller Scott Stringer swiftly took de Blasio's concern to the next level, ordering an audit of the Board of Elections.

"The people of New York City have lost confidence that the Board of Elections can effectively administer elections and we intend to find out why the BOE is so consistently disorganized, chaotic and inefficient," he said during a press conference Tuesday afternoon. “The next president of the United States could very easily be decided tonight. And yet the incompetence of the Board of Elections puts a cloud over these results. It’s time we clean up this mess.”

Although Hillary Clinton handily took every New York City borough, and there is no indication to think the affected Brooklyn voters were overwhelmingly would-be Bernie Sanders voters as Clinton took that borough by 60 percent to Sanders' 40 percent, Sanders complained of what he called the city's "disgrace."

"It is absurd that in Brooklyn, New York -- where I was born, actually -- tens of thousands of people as I understand it, have been purged from the voting rolls," Sanders said during an election night campaign rally at Penn State University.

Election Justice USA, a voter rights organization that unsuccessfully sued to have the Democratic primary opened to more than just Democratic voters, told CNN it planned to go to Federal District Court in Brooklyn on Wednesday as part of an effort to have provisional ballots from voters disenfranchised by the Board of Elections counted before the primary results are certified.