The Speaker of the House is burnishing his credentials for 2020 but doing what John Boehner did best: Nothing 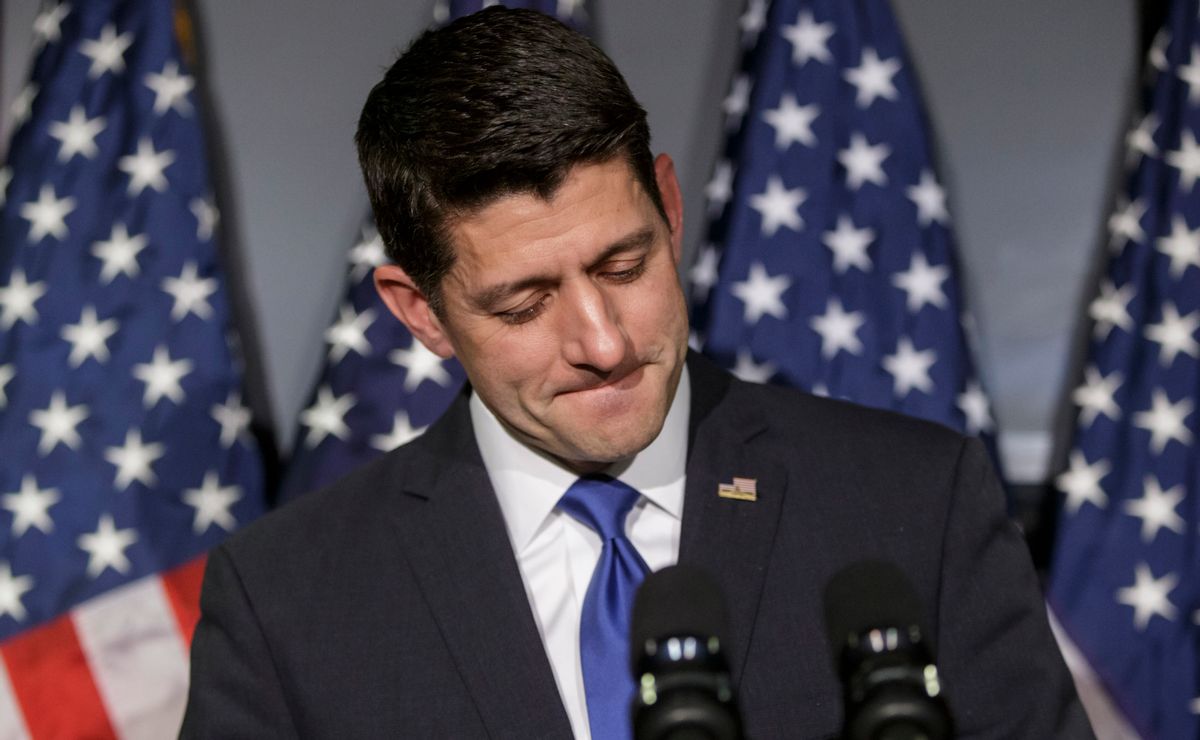 It takes a pretty shameless politician to spend his entire career agitating to slash government spending almost into oblivion, and then stand up in public and criticize an important agency for not being able to do its job with the wholly inadequate budget for which he, as a senior lawmaker, is partly responsible.

To be fair, lots of politicians are shameless in one way or another. But I’m reserving a special place for Paul Ryan after this performance at a press conference with other Republicans on Tuesday. While talking about a possible legislative push to reform the tax code, Ryan excoriated the IRS for “not doing its job” and stressed the need for a tax system and an Internal Revenue Service that “works for the taxpayer.”

What did Ryan mean by that? Who knows? It was a nice little bit of agitprop for the reporters in the room to dutifully write down. In no way does it address the fact that the IRS has seen its operating budgets slashed by the GOP majority since 2010. At the same time, the agency has been given an ever-expanding sphere of responsibilities that includes enforcing tax provisions of Obamacare and monitoring the hundreds of new organizations flooding our election processes with unlimited funds thanks to the Supreme Court’s decisions in the Citizens United case and McCutcheon v. FEC. Could asking a government agency to do more with less affect its performance? I’m going with a resounding “YES.”

Ryan knows all this. He was chairman of the House Ways and Means Committee, which has oversight of the IRS, before he ascended to the Speaker’s job last October. And before, that he chaired the House Budget Committee for four full years following the 2010 Republican landslide. Underfunding the IRS so it cannot do its job and then complaining about its ineptness is pretty much baked into his ideology. For all I know, he has a voodoo doll labeled “Internal Revenue Service” that he jams pins into on a daily basis.

None of this is news to anyone who has followed Paul Ryan’s career. The irony is that just last week, we were talking about his hilarious ineptness in getting his caucus to do even the most basic bit of work for which the House is responsible – passing a budget resolution that would eventually lead to writing and passing appropriations bills to keep the IRS and every other government agency funded and operational. In the political ecosystem of Washington, where everyone either has the memory of a guppy with a head injury, or otherwise has to pretend they do, no one to whom Paul Ryan listens will call him out on this. And if by some miracle someone does, he’ll have a ridiculous excuse to keep his conscience clean.

So it is bad enough that Ryan and his fellow ideologues have crippled our government’s ability to perform basic functions. But what about some of the more pressing crises that are going on while the right wing of the Republican caucus congratulates itself on its conservative purity and the Speaker continues to suck at his job? Consider a few problems that the House is not addressing.

Puerto Rico – The territory would like it if its colonial masters would make it a full state. But at the moments its leaders will settle for solutions to the more pressing problem of staving off debt default, bankruptcy and full economic collapse. Unfortunately, a measure that the House was working on last week couldn’t make it out of committee to the House floor because conservatives not only opposed taxpayer dollars going to bail out Puerto Rico, but also tried to put in a measure that would lower the island’s minimum wage. What does the salary of hotel maids paid to clean up after drunken gringo tourists have to do with the debt crisis? Right-wingers and libertarians have been blaming the minimum wage for helping to wreck the economy. How legitimate a critique that is likely depends on your ideological leanings, but why low-wage workers on the island should be more impoverished in an already weak economy is a question I’ll leave to bigger sociopaths than myself to answer coherently.

Zika virus – Speaking of Puerto Rico, officials there are worried that the debt crisis will hurt any efforts to fight a Zika outbreak there. The island’s heavy mosquito population makes an eruption there likely, and cases of the virus are popping up in the United States as well. Given the panic last year over a couple of cases of Ebola reaching the mainland, one would think Congress would want to get ahead of this potential health crisis before its constituents start freaking out.

Nope! The Republican Congress turned down a request from the Obama administration for $1.8 billion – a pittance in budgetary terms – for reasons that seemed to boil down to “We already gave you money for fighting other diseases, how many could there be in the world?” This has forced the Obama administration to pull funds from other anti-disease programs and dedicate them to anti-Zika efforts. So like the IRS, public health administrators working to prevent flare-ups of malaria and tuberculosis are going to have to do more with less. And the anti-Zika effort will still be underfunded, which is going to make for some very awkward traditional baby-kissing by politicians running for re-election in the future if those babies are victims of microcephaly.

FAA funding – Do you like flying? How about flying and not having your plane fall out of the sky? Then you’ll be happy to know the Senate, at least, is taking funding of the Federal Aviation Administration seriously. But the House? Its funding bill for the FAA is stuck in committee due to the Republicans’ desire to shift 38,000 FAA employees, including 14,000 air-traffic controllers, into a “federally-chartered, independent, nonprofit corporation” – in short, to privatize part of the agency and remove it from federal oversight. But it would still essentially be a monopoly, which sort of negates the usual conservative lines about “competition” and “free markets.”

So why do it at all? Who knows? But if the House can’t pass its own bill and then reconcile it with the Senate’s, funding for the FAA runs out July 15, at the height of tourist season. At which point, pressure from airline lobbyists and angry constituents afraid of having to cancel vacations will likely result in a short-term measure to keep the FAA going pushed through both chambers. Luckily (I guess) we’re all used to governing by crisis at this point.

That last part assumes Paul Ryan will go along with such a plan, since he has said repeatedly he wants the House to return to passing bills through “regular order” – that is, the complete opposite of how it got done during the Boehner years. But given that regular order has failed to reassert itself for something as simple as a budget resolution, the chances of it working to resolve any of these other crises is basically zero. Which makes Ryan just as hapless as his predecessor, and any hope for a functional government in the near future just as screwed.