Amy Schumer's missing edge: Has she outgrown her own show already? 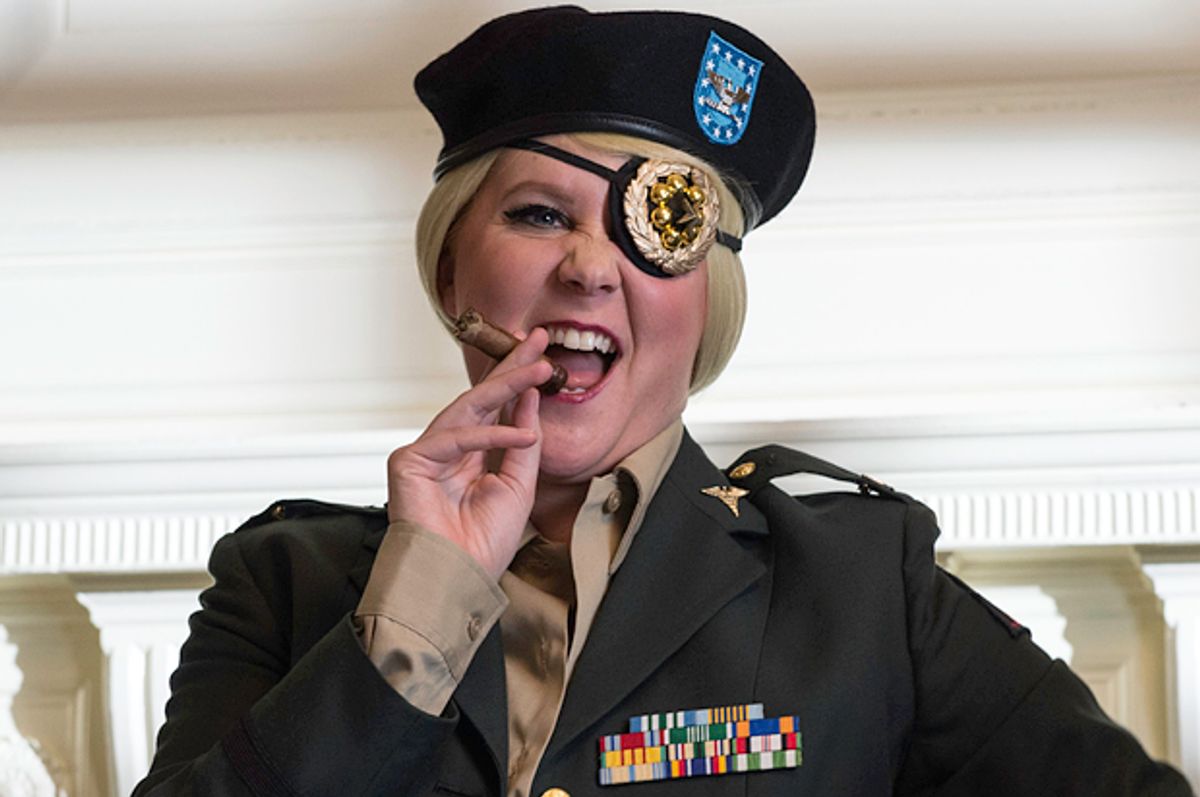 The ad campaign for season four of Comedy Central’s “Inside Amy Schumer” is, as is characteristic for Schumer, uncomfortably on point. In a few different spots, a doctor diagnoses the comedian with the medical condition of “overexposure,” with the resultant connotations of sunburn, radiation poisoning, or, you know, public nudity. For Schumer, it’s both her network and herself acknowledging that for the last several months, she has been everywhere at once. In addition to a critically lauded (and award-winning) third season for her show “Inside Amy Schumer,” which produced one of the most remarkable comedy episodes of the year, Schumer wrote and starred in “Trainwreck,” which went on to gross over $100 million domestically.

Because Schumer’s comedy is so trenchant—and, more to the point, because it assumes and implies feminism, with every frame—she has become more than just “Trainwreck” and “Inside Amy Schumer”; she has become a symbol of Hollywood political feminism, with all of the rights and responsibilities that appears to entail. Partly that is because her work is just that good. Sketches like “Last F*ckable Day,” “Football Town Nights,” and “A Very Realistic Military Game” will likely be the go-to examples of complex, difficult-to-describe variations in gender privilege for quite some time, because they are considered and complex arguments, rendered into minutes-long bits of sketch comedy. Schumer is fearless with her topics, and fully embraces the perspective of feminism; it makes for comedy that often expresses exactly what is so hard to say about the world we live in.

It has also led to a lot of scrutiny. Schumer transformed from a marginal comedian on Comedy Central to one whose every tweet and public comment creates a new wave of commentary. One might call it the Lena Dunham effect, but Schumer went for that position of controversy and buzz with a lot more intention than Dunham, who seemed continually surprised that she was, for many people, a walking flashpoint. Where others might find awkwardness or embarrassment, Schumer has found opportunity—through her show, her stand-up, her Twitter account, and the media appearances of the very famous, such as the cover of GQ or a nude in the Pirelli art calendar. She’s met the president and danced with the Democratic frontrunner, she’s photobombed Meryl Streep and Harrison Ford. And she has become a target; the perceived face of feminism will always be subject to critique, whether that is from intersectional feminists who critique her portrayal of minorities or misogynists who can’t even fake decency for an interview.

The most extreme case of this was in July of last year in Lafayette, Louisiana, when John Russell Houser opened fire on the audience members in a theater about 20 minutes into their screening of “Trainwreck”—killing two, wounding nine more, and then taking his own life. Houser demonstrated a deep-seated hatred and distrust of women, especially feminists, throughout his entire life. Overexposure is a serious risk, albeit not quite for the reasons that Comedy Central’s fake doctor suggests. For all of our well-argued quibbles about comedy and representation and the circular arguments for “punching up,” at least one thing can unequivocally be said for Schumer, which is that she is definitely striking a nerve.

Returning from this life—from personality/activist/Tweeter/famous friend to showrunner of her own half-hour sketch show on Comedy Central—is another potential negative side effect of overexposure. Amy Schumer is not the first feminist comedian, nor is she the best; by dint of skill, timing, and zeitgeist, she has created a nationwide discussion of institutional sexism, but it has been a whole year since then. Audiences and fans have had a whole year of expecting more and more from Schumer; meanwhile, the comedian has been living through what is probably one of the most eventful years of her life. Everything else aside, Schumer would not be the first popular performer to lose a grip on their talent in the first flush of major fame.

And that is, unfortunately, what looks to be the case for the returning “Inside Amy Schumer,” which debuts its fourth season tonight at 10 p.m. on Comedy Central. The premiere, “The World’s Most Interesting Woman In The World,” is one of the weakest episodes of “Inside Amy Schumer,” period; it does not help that it is an episode stacked with marquee guest-star Lin-Manuel Miranda, playing his typically adorable self. The most political moment in the episode is a sketch featuring Schumer, as a gynecological patient, who is treated not by a doctor but by a panel of Congressmen; but weirdly, the sketch feels like it is a pale imitation of Schumer—instead of the woman who put pointed, political comedy like this on the mainstream radar. Schumer seems eager to prove in this first episode that she can be funny in ways that aren’t just about feminism, but the result is comedy that doesn’t quite play to her strengths, whether that is the kind of slapstick humor she performs for Miranda or the “relationships, amirite?” comedy she digs into with a few different segments.

The growing feeling of dread is heightened by Schumer’s considerable pull with Hollywood elites these days, as every actor not in season three scrabbles to make it to season four. Steve Buscemi, Laura Linney, Julianne Moore, Maggie Gyllenhaal, Jennifer Hudson, and Louis C.K. all make appearances in just the second episode. It’s difficult to not get the impression that the celebrity life has, in this case, clouded Schumer’s ability to tell a great joke without relying on her extant popularity or famous friends to bring it home.

But it’s not all bad. Comedy Central only sent two episodes to critics, but the second episode, “Brave,” is a lot better than the premiere. Maybe the premiere is a just a bit of throat-clearing; “Brave” settles down to brass tacks with a few sketches that approach the breathtaking brilliance of Schumer’s peak. There’s even some evidence of growth, a positive side effect of all that media discussion. In at least one sketch, which I do not want to reveal too many details of, she goes out of her way to showcase just how different of a challenge being a woman of color is, over being a white woman like herself.

Above all, it’s difficult to imagine that this season of “Inside Amy Schumer” will surpass the third, because that one really took us all by surprise. How many comedians have suddenly hit the jackpot in the third season of their self-titled sitcoms? How many sketch comedians have met the president largely because they made a ridiculously brilliant adaptation of “12 Angry Men,” but about having sex with her? Schumer’s career trajectory is even more shocking than Dunham’s, even more high-profile than Ilana and Abbi from “Broad City.” Even if it were a perfect fourth season, our expectations would just be too high.

But as is often the case with shows that have just experienced brilliance, it will now have, in all likelihood, its biggest audience ever. The ad spots mocking Schumer’s overexposure end with her turning towards the camera and vowing—almost threatening—that she’ll keep exposing herself for as long as she wants. And even though what I’ve seen of season four isn’t quite as funny as I’d like it to be, I hope that Schumer’s benign tyranny of mainstreaming feminism isn’t ending anytime soon.