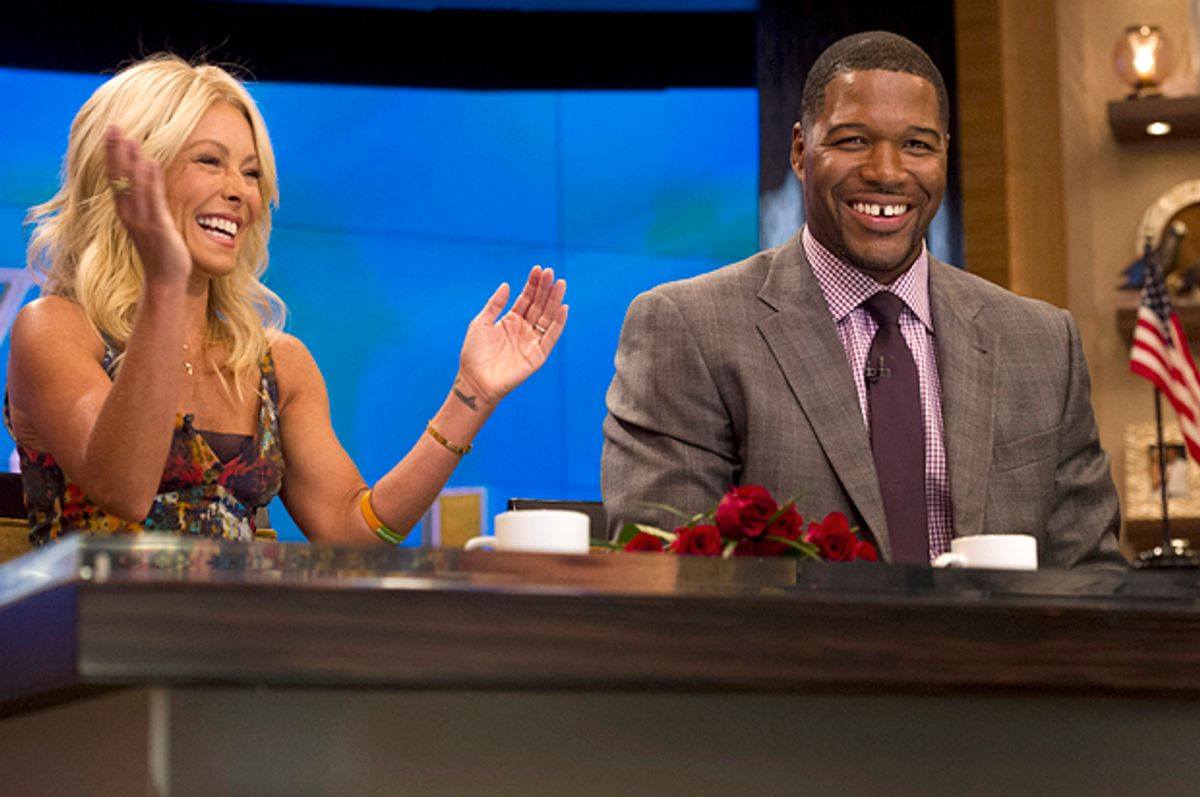 The tone of morning television is a bit like a high-school pep rally: Cheery, enthusiastic, artificially upbeat. Spontaneous dancing often breaks out, and celebrities are always happy.

But ABC has just destroyed the vibe, at least for a few days. It’s a lesson in how a network should not treat its talent. The fight is over "Live! With Kelly and Michael," which hardly seems like the sort of program that would generate controversy. Kelly Ripa, a soap-opera star and former Tide spokeswoman with a peppy on-screen manner, doesn't usually register as a natural figure of protest. But she's not happy, and for good reason.

That’s because Ripa was only told of the departure of her co-host, Michael Strahan, who is leaving to join "Good Morning America" full-time, a few minutes before the rest of the world heard it. This is a show, after all, called "Live! With Kelly and Michael."

Here’s how the Hollywood Reporter describes it:

Strahan's impending departure from the show to take a full-time gig at Good Morning America was announced on Tuesday. Since then, Ripa has been a no-show. Frequent fill-in Ana Gasteyer was there on Wednesday, apparently pressed into service on Tuesday evening.

Strahan thanked an absent Ripa on Wednesday and attempted to joke about his exit. “I was reading some stuff, and it sounded like I died,” he said. “It is not a eulogy, people!”

Well, he’s not dead. But this mess does seem to be revealing a lot of bad blood between the two and between Ripa and the network. Apparently Ripa will not come back on the show until Tuesday at the earliest, rumors abound that she’s not returning calls from people connected to the show, and she was photographed carrying a just conspicuous enough copy of Malcolm Gladwell’s “David and Goliath.” Add to that the tale that Regis Philbin, Strahan's predecessor, had reportedly told Ripa mere minutes before going on air that he was going to announce his retirement back in 2011, and you might have a recipe for frustration.

Some of the response to this conflict has concentrated on the tensions between Ripa and Strahan, as if the former NFL player is ditching their show out of spite. She did help bring him on the show, and according to the New York Times, worried about his twice-a-week "Good Morning America" gig distracting him from his time with her. He could have handled this more artfully, but he didn’t do anything terribly wrong.

Ripa has every reason to be angry at ABC, though. The network put her in a very strange position – expecting her to go on television and grit her teeth after being told her partner was splitting right before the news went public.

And ABC followed its misstep up with a patronizing canned statement:

‘Live’ continues to be a vibrant and enduring franchise under our lead host, the extraordinarily talented Kelly Ripa. ‘Live’ has successfully transitioned co-hosts twice before and will do so again. Together with Kelly, ABC and the ‘Live’ team will begin a new search to find a replacement for Michael.

Social media has taken on a political cast, with some knocking Ripa as an entitled white person, others blaming the network for disrespecting a powerful woman. Is she spoiled? Is she a badass for walking out? Oprah Winfrey just said that, "Nobody should ever be blindsided. I don't know who's in charge, but somebody should've said, 'This is going to happen.' You shouldn't have to read it in the paper. Ever. "

But for viewers, there may be a win coming: The show may now become a lot more entertaining for the few months until Strahan leaves in September. In fact, for a show that's mostly seemed as bland as most morning TV, now there’s the opportunity for the chemistry to become a little more heated over the summer.

It’s a good thing that Ripa spent more than a decade on “All My Children.” Because another soap opera is coming soon.