"Male contraceptive options haven’t changed since Elvis was thin": These revolutionary alternatives to condoms are dragging male birth control into the 21st century 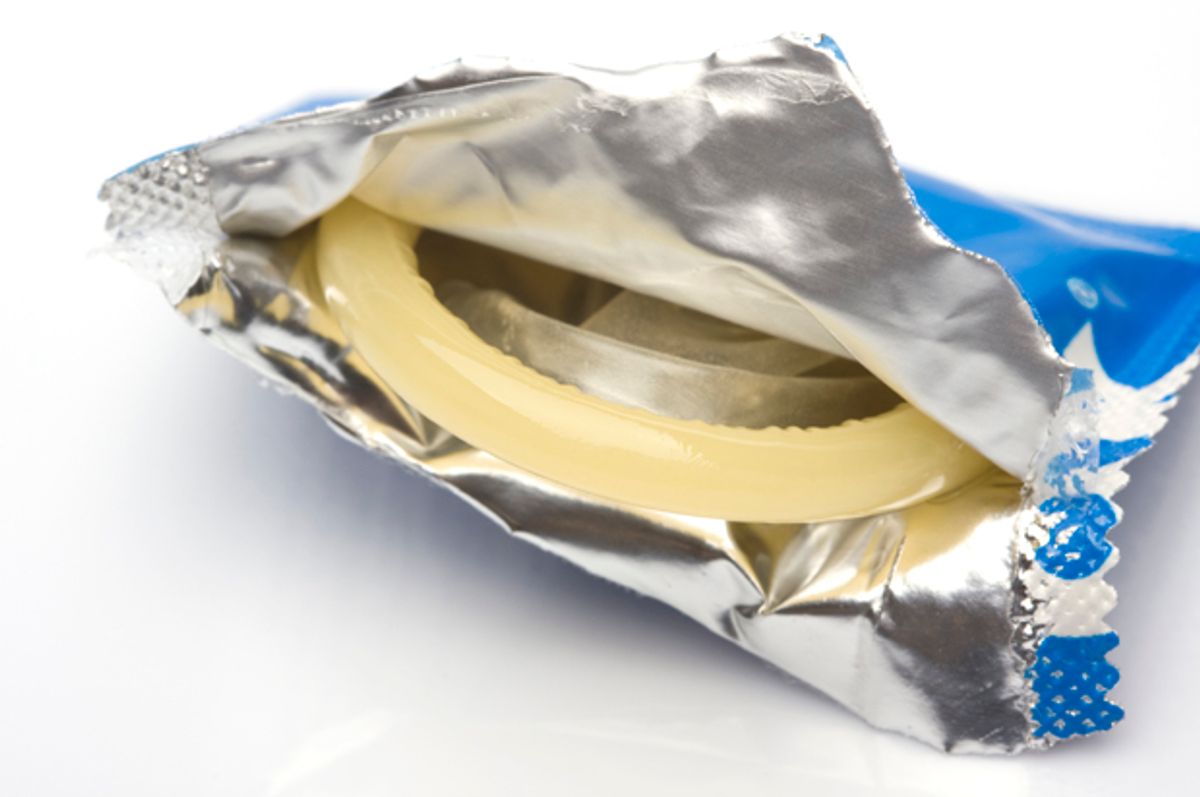 Most people think of contraception as an issue of women’s health and rights. But for millennia, men too have wanted choices—the means to decide whether, when and with whom they father a child.

Coitus interruptus or the withdrawal method, was practiced as early as 2,500 years ago, and from the 18th century till modern times has been one of the most common forms of contraception. Condoms, made first of linen or intestine, date to at least the 16th century. But today coitus interruptus, condoms, vasectomy and abstinence are still the only methods of contraception available to men. As Sightline Institute in Seattle put it, “Male contraceptive options haven’t changed since Elvis was thin, cars had fins, and Ike was stumping for your vote.”

Today almost a third of American couples rely on the man to prevent ill-timed or unwanted pregnancy, but for young men who may want a child in the future, the options stink. Condoms are the best means available to prevent STIs, but in any given year one in six couples relying on condoms will end up with an unplanned pregnancy. Withdrawal and episodic abstinence (the rhythm method) fail even more often because they are so hard to do perfectly. Vasectomy is highly effective, but since reversal may not work, it’s not an option for men who don’t already have the family they want.

By contrast, “get it and forget it” methods for women drop pregnancy risk below 1 in 500, have bonus health benefits, and return normal fertility. When it comes to people being able to manage their fertility, we are a long way from gender equality.

The good news is that the last decade has brought increased understanding of male reproductive physiology and revealed potential new methods to safeguard against an ill-timed pregnancy. No single method will ever fit for everyone, but a variety of potential contraceptives (mechanical or pharmaceutical, shorter or longer acting, reversible or permanent, some enhancing libido or sexual function and some sexually neutral) could offer men real choices that fit their age, culture and lifestyle. Some may even have bonus health benefits like increasing energy and muscle mass or preventing balding.

In addition, modern information technologies invite novel educational approaches and distribution channels for medical services including contraceptives. Technology now allows personalized education through the Internet and deliveries in hard-to-reach geographic locations, such as drone shipments to remote locations around the world. Social media opens up new opportunities to generate dialogue about men and contraceptive choice and the broader issue of intentional parenthood.

We finally may be at the point that a serious investment in male contraception could create real options for the half of the world’s population that currently has to rely on condoms, vasectomy, withdrawal, abstinence, or a trusted partner. Imagine if all people, regardless of gender, could enjoy sexual intimacy and pleasure without the worry of an unexpected pregnancy? Imagine if each person, regardless of gender, could fully choose if or when to become a parent, and with whom?

Male reproductive physiology offers three broad targets for contraception. A potential contraceptive can target the production of sperm itself, or the maturation and function of sperm, or the transport of fully developed sperm out of the male body. Within each of these three broad targets lies a range of more specific targets and mechanisms for preventing unwanted fertility. Some potential contraceptive approaches are hormones, some are drugs and some are mechanical. Each is in very different stages of research and development.

Approaches that affect maturation and function of sperm:

Approaches that target a sperm’s ability to travel towards the egg:

Turning off sperm production with a hormonal switch

Sperm production begins in puberty and continues through adulthood, maintained by high levels of testosterone within the testes. The entire process takes between 74 and 120 days, and the testes produce 200 to 300 million sperm each day. That’s about 1,000 sperm for every heartbeat! (Think of this in contrast with the monthly ovulation cycle of women and the relative ease of targeting a single egg issued by a woman each month by comparison.)

Complex hormonal interactions between the hypothalamus, the pituitary, and the Leydig cells in the testes bring this about. These interactions are summarized in the figure that follows.

Gonadotropin-releasing hormone-based contraceptive therapy: Gonadotropin-releasing hormone (GnRH) is a pivotal hormonal control that turns on fertility by increasing levels of other hormones including testosterone in the reproductive system. Acyline and related drugs are GnRH antagonists, meaning they inhibit the action of GnRH. This class of drugs has potential for fighting prostate cancer and turning off unwanted sperm production.

To understand the next class of targets, those that alter sperm maturation and function, it is helpful to know a bit more about where and how sperm development takes place.

The Sertoli cells in the testes are the male equivalent of the ovaries. They harbor and nourish the developing sperm, then send them on their way when they are mature and ready to fertilize an egg. After maturing, sperm are collected and stored in the epididymis, where they develop motility, meaning the ability to swim. They also develop smell receptors that will sense and guide them toward an egg and the enzymes required to penetrate it. In the earliest stage of sperm development, individual immature “spermatocytes” split off from germ cells through multiple cycles of cell division. At this early stage of development they contain the DNA needed to create an embryo but lack the ability to move or fertilize an egg. It is here that JQ1 and retinoic acid synthesis inhibitors block development.

After maturation ends, fully formed sperm are released into the epididymis in a process called spermiation. The investigational drugs Adjudin and Gamendazole target this phase, causing premature release of spermatozoa. One researcher likened this to teens leaving home before they are fully able to function in the outside world.

Although methods that target sperm motility and function are in their infancy, early stage research is breaking new ground. A large number of potential targets for this aspect of sperm production come from "knock out" experiments with mice wherein researchers disrupted their genetic profile. Preliminary results from this research indicate that many different genes when eliminated produce mice whose only characteristic appears to be infertility. Reverse engineering allows identification of the proteins produced by these genes. Some of the proteins discovered to be essential to fertility include:

Even if sperm reach an egg, it may be possible to block the fusion of the two. Epididymal Protease Inhibitor (EPPIN) is a compound that binds an enzyme on the surface of the sperm, making it immobile and unable to penetrate the egg. A compound isolated from the Indonesian shrub Gendarussa may also interfere with enzymes that facilitate egg penetration.

Even if sperm are allowed to mature and gain full function, fertility can be impeded by blocking flow of the sperm down the vas deferens.

Once fully formed sperm have been stored in the epididymis, all that remains is for them to be transported through the vas deferens and urethra and out of the male body during sexual intercourse. Two interesting aspects of male physiology allow this transport phase to be a contraceptive target. One is that a man can experience normal ejaculation with or without sperm in the ejaculate. The other (and most people would find this more surprising) is that a man can experience the intense pleasurable sensation of orgasm without any ejaculate whatsoever. Consequently, unwanted fertility can be eliminated by either gating the vas or by blocking very specific muscular contractions that propel the ejaculate forward. Figure 3 shows the structures that allow for the storage, transport and release of sperm.

Interventions in this category seek to mechanically or chemically prevent sperm from traveling down the vas deferens.

One possibility that has captured the attention of researchers is the injection of polymers into the vas, creating a possibly reversible alternative to vasectomy. Part of the appeal is that this kind of outpatient procedure is non-surgical and does not require anesthesia. Projects focused on bio-polymeric plugs include Reversible Inhibition of Sperm Under Guidance (RISUG), Vasalgel, and Echo-V. In each case, a liquid polymer is injected and then hardens, either blocking or busting sperm as they pass through the vas deferens. When contraception is no longer desired, a solvent or ultrasound is used to dissolve the polymer.

A potential contraceptive called the Clean Sheets Pill works at an even later stage, after sperm are mixed with the fluids that make up ejaculate. Once formed, ejaculate is propelled forward by different muscle contractions than those creating the rhythmic sensation and pleasure of orgasm. Consequently, the Clean Sheets Pill works by relaxing the muscles that would otherwise propel ejaculation, effectively turning off the flow of both sperm and ejaculate while still allowing the muscle contractions that create the pleasure of orgasm. Any ejaculate is simply reabsorbed by a man’s body just as it is routinely during cycles of arousal that don’t end in orgasm.

The time may be right for male contraception. More and more young men, and men not so young too, want options—the ability to control their own DNA, their parenthood, and the trajectory of their future. What is missing for guys, to an unconscionably greater degree than with contraception for women, is available product and a societal mindset which demands this.

Getting real alternatives into the hands of men who want them won’t be easy or cheap. Most promising drugs get scratched off at some point between early lab research and final clinical trials—a process that can take two decades and hundreds of millions of dollars. The male contraceptive nearest to market (one that also treats low testosterone!) is languishing in clinical trials for lack of research funding. Most certainly, not every option listed in this article will pan out. But some may, and new possibilities are constantly being discovered, sometimes quite by accident.

Some people say that making this investment is a matter of basic fairness—that every person deserves the right to determine their own fertility no matter where they may fall on the gender spectrum. In the words of Aaron Hamlin at the Male Contraception Project, “It’s been 55 years since the Pill for women came to market in the United States. The Pill for men is long overdue.”

Read More
Scientific American: Beyond Condoms: The Long Quest for a Better Male Contraceptive
Sightline Institute: Burning Rubber(s)
The Atlantic: Block That Sperm!
NYT: Scientific Advances on Contraceptives for Men
Huffington Post: Is Male Birth Control Coming? The Gates Foundation Thinks So
WSJ: Honey It’s Your Turn
Popular Science: How Not to Be a Dad
Salon: Stop Our Sperm Please
Guardian: Who Wants a Male Pill?
ValerieTarico: Will Reproductive Rights Advocates Stand Up for Men?