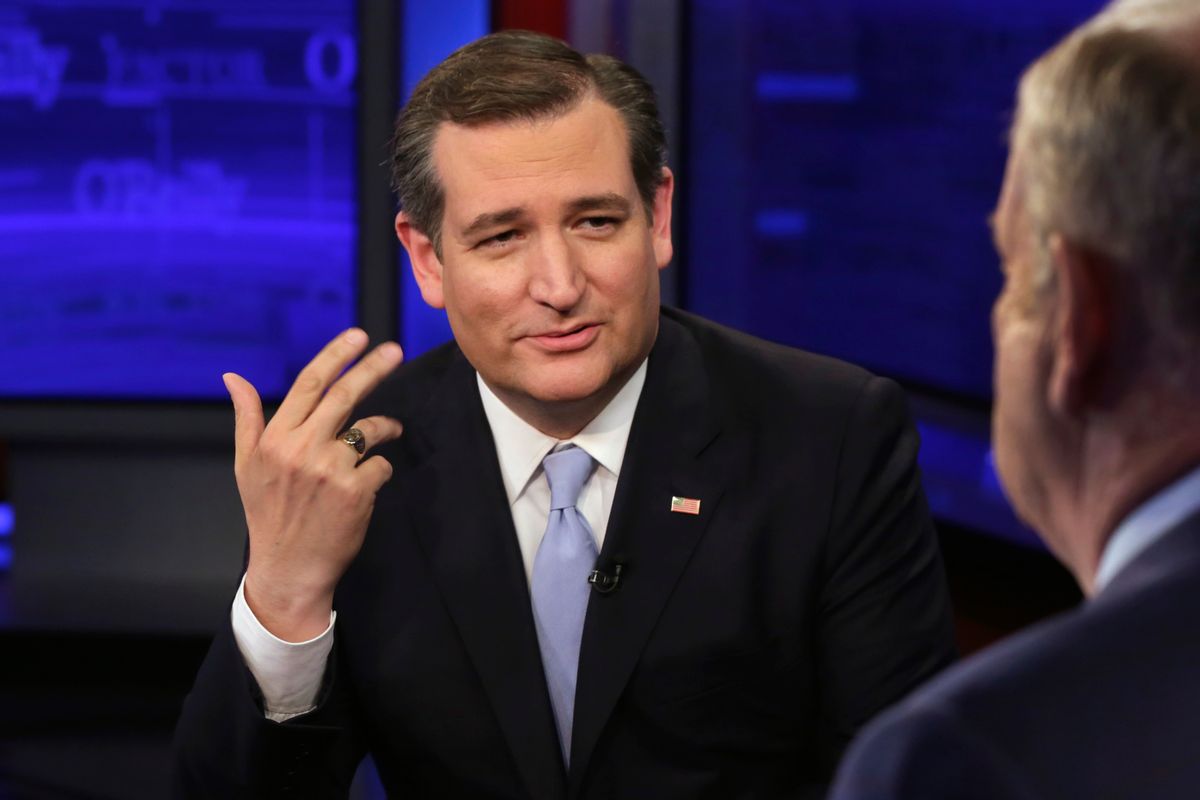 After a dismal performance in New York, whose Republican voters looked upon the Texas senator who denigrated their value system so much so that he managed to lose a congressional district to Ben Carson despite his dropping out of the presidential race a month ago, Ted Cruz's presidential campaign was declared dead on arrival in Cleveland for the GOP's convention this July. The Associated Press reported that after Tuesday's vote, Cruz is mathematically eliminated, leaving Donald Trump as the only Republican candidate with any chance of clinching the nomination before the convention.

Naturally, Cruz's campaign has turned to fearmongering and scapegoating to deflect from the news that according to Ted Cruz -- earlier this month Cruz called on John Kasisch to drop out after it was determined Kasich was mathematically eliminated from earning enough delegates to win the nomination outright -- it's now time for the Cruz campaign to call it quits.

"Grown adult men -- strangers -- should not be alone in a bathroom with little girls. And that's not conservative. That's not Republican or Democrat. That's basic common sense," Cruz asserted while campaigning in Maryland on Thursday.

In the wake of widespread corporate backlash to North Carolina's anti-transgender law banning municipalities from passing ordinances allowing for gender neutral restrooms (Target and the NBA are just two giant corporations that have taken a stand against the discriminatory law today) presidential candidates have been asked to comment on the controversial conservative effort to codify anti-transgender discrimination under the guise of religious freedom.

Reacting to Donald Trump's opposition to the law, citing negative business repercussions on the "Today" show early Thursday, Cruz said the backlash was proof positive that the country has "gone off the deep end."

"I guess he's showing us what that looked like," Cruz told Glenn Beck in a radio interview Thursday. "I am waiting with anticipation for the new baseball caps: "Make PC Great Again.'"

"As you know, my daughters are 5 and 8. My 5-year-old knows the difference between boys and girls," Cruz said, exploiting his children to make a hateful and wholly dishonest political point. "That's not a reasonable position, it is simply crazy and the idea that grown men would be allowed alone in a bathroom with little girls -- you don't need to be a behavioral psychologist to realize bad things can happen, and any prudent person wouldn't allow that."

Of course, as it stands now, male predators currently do share restroom space with young boys, who, perhaps unbenownkst to Cruz, are also victims of sexual predators. But all that aside, Cruz's basic contention is an ugly right-wing myth meant to dishonestly link transgender people with criminality. But in fact, an investigation by an independent non-profit found no connection between transgender nondiscrimination rights for restrooms and locker rooms and women’s safety:

A new investigative report by the non-profit new agency Crosscut shows that in states where such legislation has been passed,the safety of women is not compromised.

According to the publication, officials in Nevada, Oregon and Hawaii — the latter having protections in place for 10 years— said the laws haven’t been linked to any crimes.

“I’ve never heard, even from opponents, a specific example of an instance of sexual assault,” a director for the Hawaii’s civil rights commission told Crosscut.

Still, as his campaign flounders, Cruz desperately culls the transphobic beliefs of the conservative base for votes, as he is wont and trained to do.

"And it is only the lunacy of political correctness, ESPN fired Curt Schilling for making the rather obvious point that we shouldn't allow grown adult men strangers alone in a bathroom with little girls, that's a point anyone who is rational should understand," he continued, rushing to the defense of the ever controversial commentator who recently posted an anti-trans meme on social media.

The Facebook post Schilling shared showed a man dressed in a wig and women's clothing, reading, "LET HIM IN! To the restroom with your daughter or else you're a narrow-minded, judgmental, unloving racist bigot who needs to die."