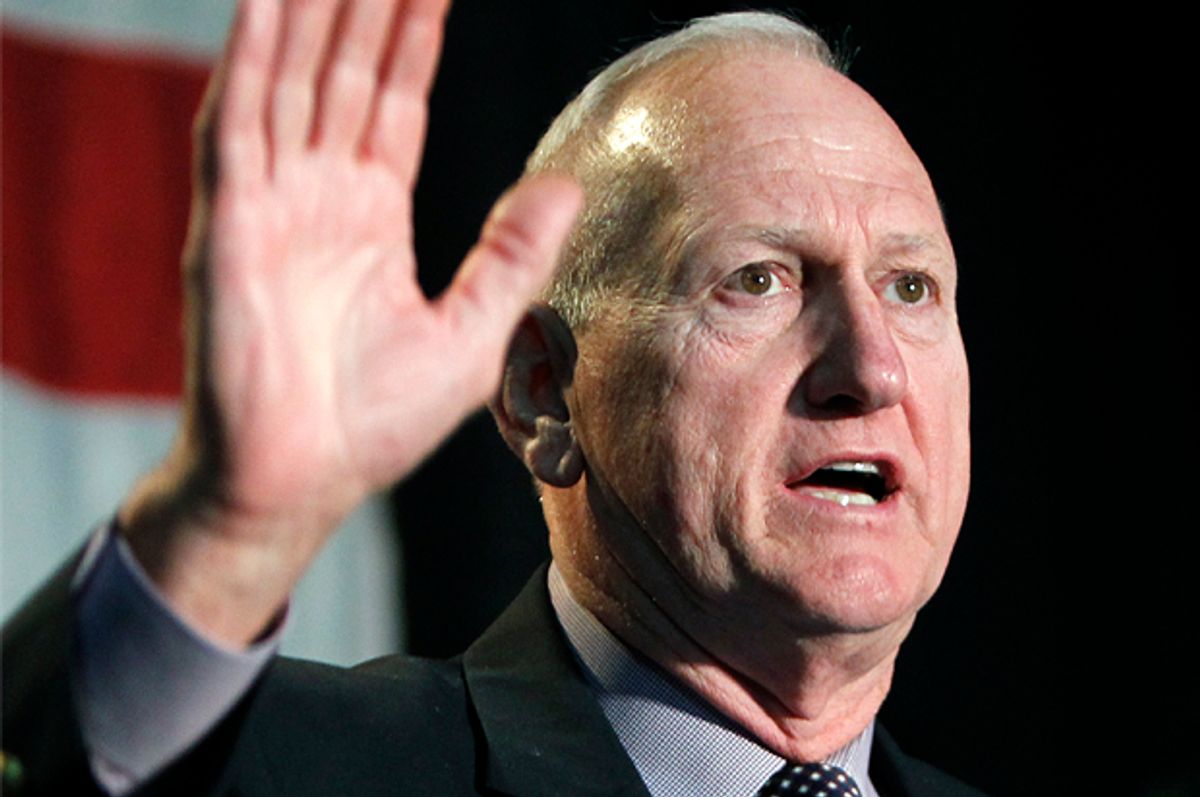 Donald Trump gets the lion's share of attention and alarm for his overt bigotry against Muslims, but it's crucially important to remember that, by any reasonable measure, Ted Cruz is just as bad. Cruz reminded us of this in March by spewing incoherent but definitely bigoted ideas about patrolling "Muslim neighborhoods" in national news media, but most of the work he and his supporters do in advertising his bigotry against Muslims is being conducted through smaller, right-wing channels.

Recently, Cruz's national security adviser, former Lt. Gen. William "Jerry" Boykin, went on the program "Sandy Rios in the Morning" and argued that the Muslim Brotherhood is secretly infiltrating the government and "changing our culture in general and forcing us to essentially modify our own behavior in what I think is a dangerous way." Which is to say, he was implying that we're on the verge of forced conversion to Islam or being turned into an Islamic theocracy or some variation of that conspiracy theory.

As evidence for his paranoid conspiracy theory, Boykin cited some internet hoax stories, saying "it is reported that you have a Sharia court in Texas, for example, and Michigan, and you’re going to see more of that if people don’t wake up and take a stand against this and recognize the nature of the threat.”

As Right Wing Watch demonstrates, however, that the reports that Boykin alleges are out there "are nothing but online rumors."

The Michigan story came from one of those hoax sites that traffics in fake stories designed to push right wing buttons, generating traffic by exploiting people's gullibility and racism.

The Texas story came from right-wing hysterics who found out that some Muslims, like many Christians and Jews, use religion-affiliated mediators to handle intra-community disputes, which is a way to avoid lawsuits. (It's similar to the way that divorcing couples are encouraged to use a mediator rather than going straight to court.)  The eagerness to believe in "creeping sharia law" took what amounts to a bunch of people sitting in a room hashing out their differences and spun it into a bizarre claim the Muslim theocrats are somehow running the courts.

At this point, it's reasonable to ask if there's any stance Cruz has that isn't based on urban legends rather than real world evidence. Politifact rates less than 1 out of 4 of Cruz's statements as "true" or "mostly true," and of those, many are mundane observations, like, "More than once, I've actually had a conversation with the protesters on substance," and "We have a federal government that thinks they have the authority to regulate our toilet seats."

(On the latter front, I have to question the leadership skills of anyone who denies the value in having a national standard on the size and shape of a toilet seat, if only because it will save us all trips to the Home Depot. Especially since his voting base would be the first to complain about the "weird" shower heads and toilets you'll find when you travel outside of the country.)

The hiring of Boykin as a national security adviser is just another piece of evidence that Cruz's platform is probably cribbed out of a xeroxed right-wing pamphlet some guy wearing a sandwich board damning "sodomites" to hell might hand you.

In 2003, Boykin, who was assigned by the Bush administration to track down high-value targets like Osama Bin Laden (who was finally caught long after Boykin retired), embarrassed the administration when quotes from a speech he gave while in uniform were leaked to the public. The quotes cast his work in religious terms, making it sound like he believed the U.S. military was being used by God to wage war on Islam.

"I knew my God was bigger than his," Boykin said of a Muslim Somalian war lord he fought in the 90s. "I knew that my God was a real God and his was an idol."

Boykin later tried to play these comments off as being somehow not about religious clash, saying he meant that he was denouncing "his worship of corruption, of power, of money". To which one can only wonder if Boykin missed the multiple lessons in Sunday school that teach the value his religion puts on being honest.

The Bush administration really wanted to frame the wars in Iraq and Afghanistan not as religious wars, and in fact to portray the efforts as attempts to save Muslims from terrorists and dictators. So while they didn't fire Boykin over this, Bush did go out his way to say publicly, "Look, it just doesn't reflect what the government thinks."

But the guy who was an embarrassment to the Bush administration — the Bush administration! — is being elevated to a national security adviser for Cruz. And now he's showing that, bizarre excuses to the contrary, he is, indeed, a right-wing nut whose hatred and paranoia over Muslims leads him to embrace conspiracy theories that are so ridiculous that you really shouldn't even need to debunk them to know they aren't true.

This is typical for the Cruz campaign, however, which has been trying to out-bigot Trump on the Muslim question for months. The only difference is that Trump tends to be a straightforward racist about it, simply regarding Muslims as a threat because they are perceived as different.

Cruz, however, aligns himself with the Christian right version of Islamophobia, which is simultaneously weirder and more elaborate, obsessed with conspiracy theories about sharia law and pseudo-lofty rhetoric about a clash of civilizations. It's no less hateful, but it complicated and weird, which might be why Trump's more straightforward racism has more appeal these days.