Once a thug, always a thug: Donald Trump will never (ever) be presidential

The Republican frontrunner is now getting credit for not insulting his opponents. Has our press been lobotomized? 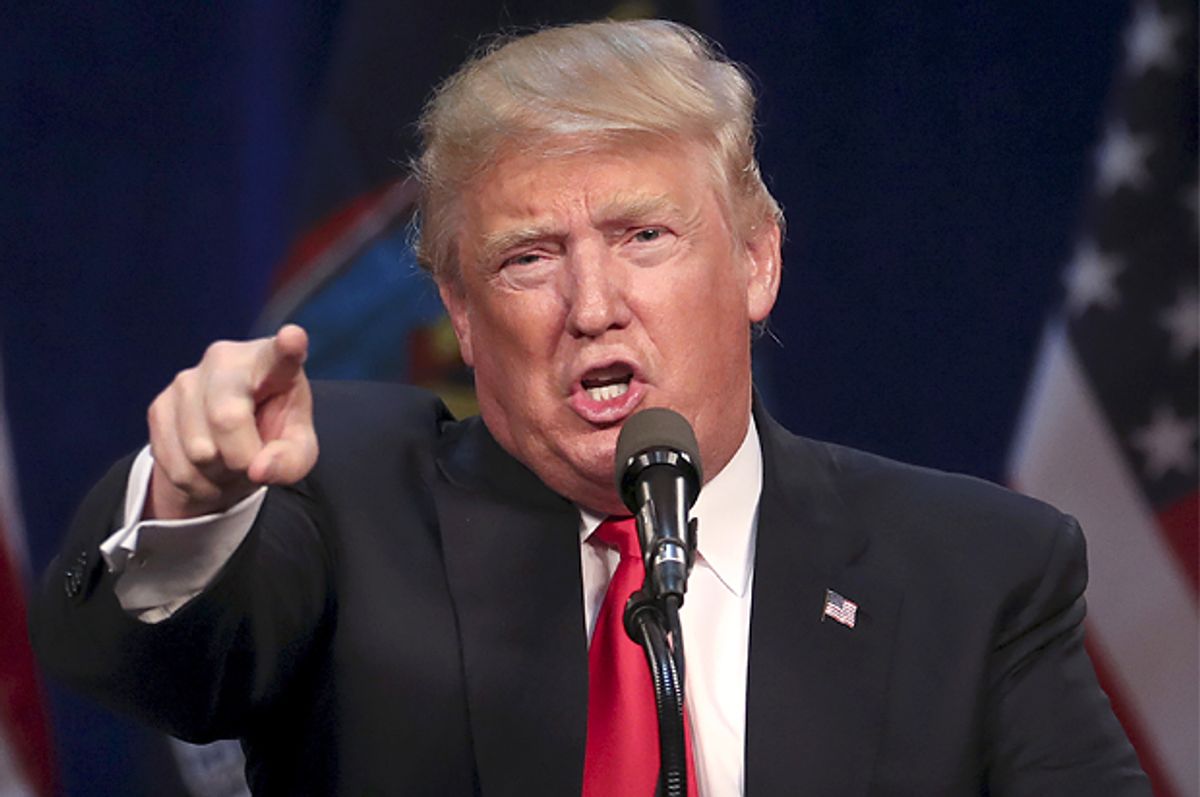 If you noticed that the last two Sunday mornings were slightly less chaotic on the talk show circuit, that’s because Donald Trump broke with his longstanding TV tradition and did not appear. (He didn’t even call in.) For five months running, Trump had been a fixture on the Sunday shows (he’s made 70 appearances since the beginning of 2015), spouting off endlessly and often creating controversy as producers watched their Trump-fueled ratings climb.

It’s been a win-win for Trump and the press.

The blueprint looked like this: Trump played the role of reality TV star turned-carnival barker while the press cheered him on, feasting off the clicks and audience surges he constantly delivered.

Missing for too long from the equation? In-depth reporting and holding the blustery candidate responsible for his often fact-free statements. “I don’t think he’s been held accountable by the broadcast media for his erroneous statements and repeated lies,” Trump biographer Tim O’Brien tells me.

The author of TrumpNation: The Art of Being Donald, O’Brien gives the press a D- grade for its covering of Trump as a presidential hopeful. He’s especially critical of cable news’ open-door policy of Trump coverage, such as live, unfiltered broadcasts of his rallies. “They give him the backyard to run around and then train their cameras on him to see what happens,” says O’Brien.

But now, Trump is taking a step back and turning down media invitations. He’s also supposedly trying to roll out a new, more “presidential” image.

Will the press take the bait?

There’s no question that there’s been a makeover attempt within the Trump campaign in recent days. According to press reports, longtime political operative Paul Manafort has essentially taken over the campaign. The move has been widely seen as an effort to tighten up the operation. One key trait: pulling Trump out of the media spotlight where he’s been living for the last nine months.

The campaign staff shakeup and Trump’s absence from the Sunday shows “give the impression that campaign veteran Manafort has taken the reigns and directed Trump to scale back on some of the off-the-cuff behaviors that have gotten the campaign negative coverage in the past,” wrote conservative blogger Larry O’Connor.

The new-look Trump was unveiled Tuesday night after his New York primary victory when he gave an unusually succinct victory address and avoided his usual partisan insults.

Right on cue, political commentators swooned over the costume change from Trump, giving him credit for not insulting his opponents and (temporarily) dialing back the buffoonery.

To repeat, the press gave Trump credit for not brazenly insulting people during his victory speech. And overnight, the press is hyping as “presidential” a candidate who’s spent the last nine months wallowing in campaign bigotry. Talk about a standard that’s been invented out of whole cloth just for him.

Commentators might be playing up the new, kinder and gentler Trump, “but where’s the evidence” anything has changed, asks Trump biographer O’Brien. So far there is none.

Meanwhile, note that candidates who try to unveil a new look mid-campaign usually get called out by the media’s authenticity police. But there’s been very little of that regarding Trump this week; very little mocking of him for attempting to construct a new public persona on the fly.

We’ll soon know for sure whether Trump has any plans to abandon the thuggery that’s defined his campaign to date. But his absence from the Sunday shows the past two weeks suggests the campaign may be trying to throttle back his media availability to some extent. Instead of dashing in front of television cameras, or speed dialing into news programs, Trump has taken a step back, as witnessed by his recent Sunday show hiatus.

In doubt is whether Trump’s stepping back from his shiny-object media strategy, which the press gladly supported since last summer. “Every time he needs to raise his visibility, change the subject, or respond to an attack, he says something outrageous and the cycle starts again,” wrote Joel Simon at the Columbia Journalism Review.

That in turn has served as one of the media’s justifications for showering Trump with unprecedented attention: They treat Trump differently because Trump acts so differently!

Trump didn’t act like other politicians, the press claimed. He wasn’t guarded in his comments. He wasn’t surrounded by consultants. Trump was authentic and controversial. Or so goes the argument. And best of all, Trump gave lots and lots of television interviews. His sound bites demanded unending press attention.

In the unlikely event Trump actually manages to find a softer, more “presidential” tone, and become slightly media shy, will the press dial back its obsessive, celebrity-like coverage, and apply a more critical eye to his wild claims?