Nobody really knows why Kasich is still in the GOP primary. His stated reasons don't help elucidate the matter much 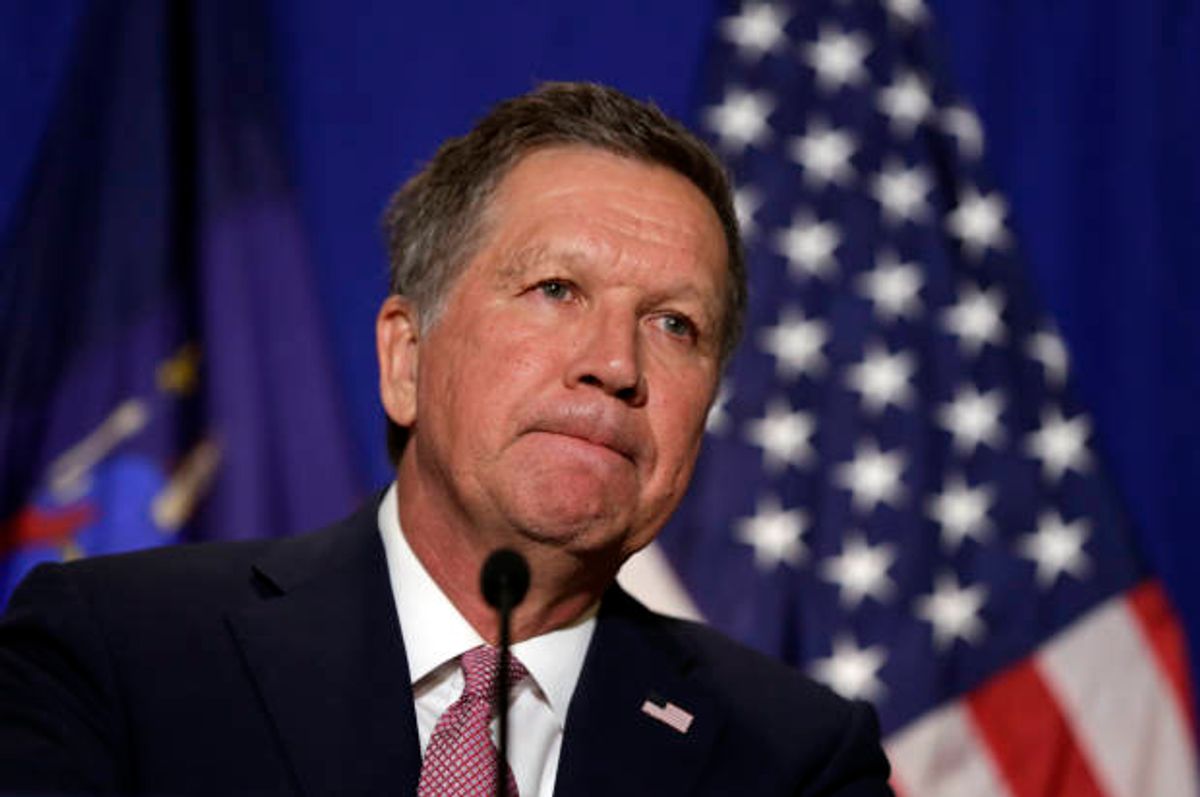 Speaking to the Washington Post editorial board earlier this week, John Kasich made his pitch for the presidency, saying he is a rebel and an anti-establishment maverick who also has a resume a mile long from having been a Republican official for most of the last 30 years. And it's kind of true. Unfortunately for him, his brand of rebel is the type that was popular 25 years ago, the type who worked with Democrats to pass budget deals or campaign finance reform. It's the type that says the Republican party is too conservative. He doesn't seem to have gotten the memo that today's Republican maverick thinks the the Republican Party itself is a bunch of wishy-washy, liberal sell-outs if they even pretend that compromise is a virtue.

Still, he does represent a small faction of sane Republicans, and this comment will undoubtedly speak to them:

See, I am a fundamental believer in ideas. If you don’t have ideas, you got nothing. And frankly, my Republican Party doesn’t like ideas. They want to be negative against things.

Now we got – we’ve had a few who have been idea people. We had Reagan. Okay, Saint Ron. We had Kemp, he was an idea guy. We had, you know, I’d say Paul. Paul is driven mostly by ideas, Paul Ryan. He likes ideas. But you talk about most of them, most of them – the party is kind of a knee jerk against. Maybe that’s how they were created. I don’t know.

That's quite an indictment, and he's right. It used to be an article of faith that the Republican Party was the party of ideas and it was the moribund philosophy of the left that was creaking along with nothing left to offer. But that's been over for a long time, going back to when Kasich was in the leadership and Newt Gingrich was burning down the House. You would at least think he would have noticed when he was employed at Fox News 15 years ago that "ideas" weren't exactly motivating the right anymore.

But lest anyone gets the idea that Kasich has any innovative new ideas, his litany of policy prescriptions could have come directly from the Poppy Bush campaign. He'll eliminate some federal agencies like the Commerce Department and move Medicare to "coordinated care." He defends his massive tax cuts by evoking stale Wall Street blather about "certainty" being the magic elixir that will stimulate growth. And he has the nerve to claim that the budget analysts who call his tax cuts a budget buster are innumerate hacks despite insisting he's going to win the nomination -- even though he was mathematically eliminated some time ago so.

There were also times during the interview when one was reminded that John Kasich can sometimes give Donald Trump a run for his billions in the boasting department:

And if you look at Ohio, you know, we have so many ideas, new ideas, newfangled ideas in Ohio it’s unbelievable, and they’re paying off. It’s the same thing I did when I was here, whether it was reforming the Pentagon or fixing the budget.

His subsequent ramble about the primaries, the convention, the party and politics is so disjointed you wonder if he's so sleep-deprived from campaigning that he can't think straight. It seems to be part of his "common sense, regular guy" persona, but it ends up sounding downright daft. It's not quite as bizarre as Trump's frightening stream of consciousness, but it's closer than any allegedly sensible moderate should be.

But one thing does come through in all of it: Kasich truly believes that if either Trump or Cruz are nominated, the party is going to be wiped out in November at all levels. And he thinks that its best hope of avoiding that is the grassroots party officials who are being selected as delegates, who he trusts to make a sensible decision and choose him. Unfortunately, Kasich doesn't seem to have met the Tea Party or the conservative movement stalwarts who have taken over the party in the last few years. You'd think the governor of Ohio would be a little bit more in touch, but there's something about Kasich that's frozen from an earlier time. He obviously is engaged in contemporary politics, but his rhetoric and attitudes are right out of the 80s.

The other headline that came out of this interview was his answer to the question of whether the District of Columbia should have the vote. The sensible, moderate, compassionate conservative said no:

ARMAO:  What about voting rights in Congress, voting representatives?

ARMAO:  But you realize though that people in D.C. pay taxes, go to war and they have no vote in Congress.

ARMAO:  How is that–

KASICH:  Well look, I am not – I don’t – I am not, because you know what, what it really gets down to if you want to be honest is because they know that’s just more votes in the Democratic Party.

Those would be mostly African-American Democratic votes. What's that stale old saying about a gaffe being when a politician accidentally tells the truth?

To his credit, Kasich has not joined Trump's wall and mass deportation party. But whether he knows it or not (and I expect he knows it very well), he has evoked the major conservative movement motivation for opposing immigration and supporting vote suppression: the likelihood that American racial minorities and immigrants will become Democrats after being treated like dirt by white conservatives.

Ann Coulter, author of "Adios America," makes the point explicitly. She not only claims that any path to citizenship for undocumented workers and their kids is a nefarious plot to create more Democrats, she claims that's the design of all immigration for the past 50 years:

Half a century ago, Democrats looked at the country and realized they were never going to convince Americans to agree with them. But they noticed that people in most other countries of the world already agreed with them. The solution was obvious.

So in 1965 -- 50 years ago this week -- Sen. Ted Kennedy passed an immigration law that has brought 59 million foreigners to our shores, who happen to vote 8-2 for the Democrats.

Republicans should be sweeping the country, but they aren't, because of Kennedy's immigration law. Without post-1965 immigrants bloc-voting for the Democrats, Obama never would have been elected president, and Romney would have won a bigger landslide against him in 2012 than Reagan did against Carter in 1980.

This isn't a guess; it's a provable fact. Obama beat Romney by less than 5 million votes in a presidential election in which about 125 million votes were cast. More than 30 million of Obama's votes came from people who arrived under Teddy Kennedy's immigration law; fewer than 10 million of Romney's did.

The 1965 act brought in the poorest of the poor from around the globe. Non-English-speaking peasants from wildly backward cultures could be counted on to be dependent on government assistance for generations to come.

It's not hard to see why she loves Trump so much.

John Kasich doesn't believe that. But he reflexively says he's fine with denying people the vote if he thinks they might become Democrats. So for all his insistence that he's a sensible moderate, his inner Ann Coulter slipped out there. (And if you look at his record in Ohio, his inner Ann Coulter comes out quite a bit, in more ways than one.)

Nobody is quite sure why Kasich is still plugging along in this race and this interview didn't clear it up. Some people believe that he's really running for Vice President and others think he's just being a good #neverTrump soldier. If you take him at this word he really believes that he'll prevail at the convention when all good stolid GOP activists and officials realize that he's the only prudent and judicious choice. He's noticed that his party hasn't got any ideas but not that it's gone batshit crazy all the way down to the grassroots.