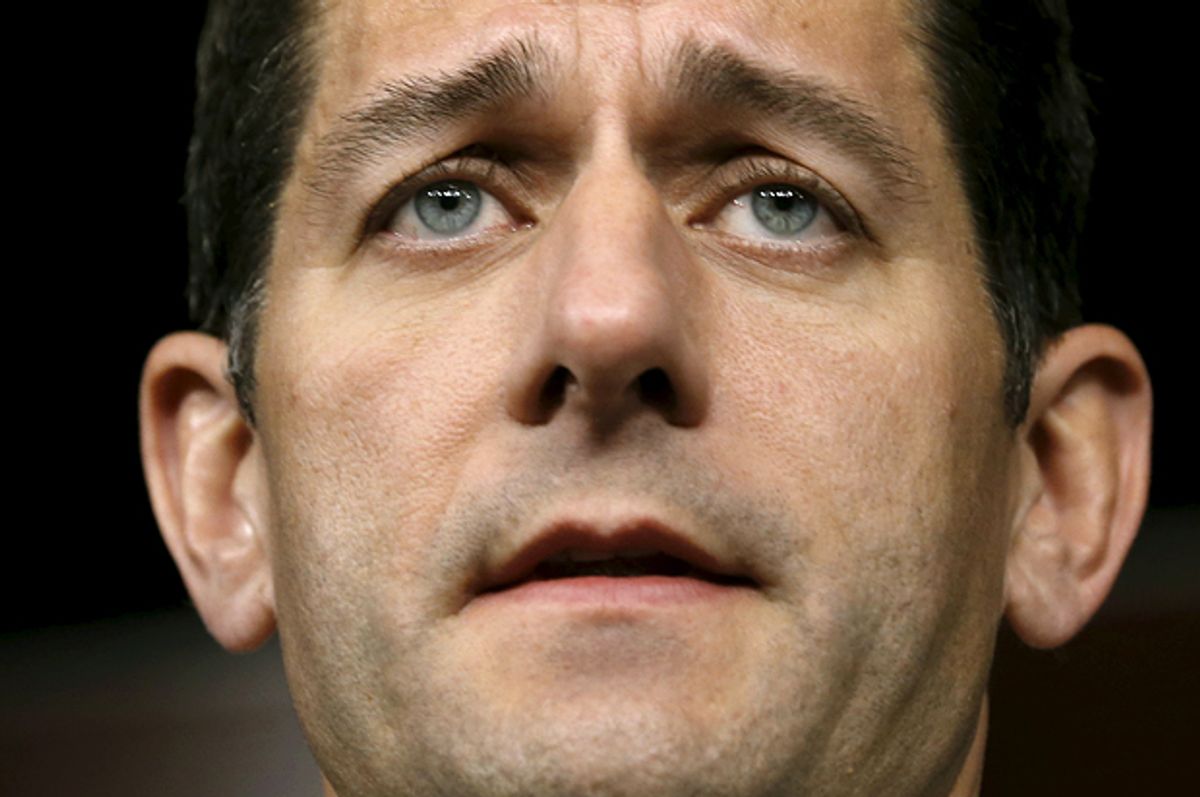 The Republican-controlled House of Representatives has a well-earned reputation as a thoroughly dysfunctional and largely useless governing body. In the six years since the GOP has taken control, activity in the House has been defined largely by titanic struggles within the party to accomplish the bare minimum of its governing responsibilities, the paralysis broken only by the need to avert a series of self-imposed crises. There’s been no real policy agenda, largely because the party in power can’t agree on much beyond “Obamacare is bad.”

Newly ensconced House Speaker Paul Ryan has made it his job to alter this perception, and to that end he and the rest of the House leadership are allegedly planning to roll out a series of policy proposals ahead of the 2016 Republican nominating convention. As the Washington Post reported this week, the purpose behind this agenda is two-fold: they want the GOP to look like a party of ideas again, and they want it to “serve as an alternative to the ideas promoted by presidential front-runners Donald Trump and Texas Sen. Ted Cruz.” You know things are looking good for a major party when they’re terrified of the crazy ideas their presidential frontrunners might serve up.

The agenda project has proceeded quietly but steadily behind closed doors since the effort was formally unveiled at a Republican policy retreat in January. The chairmen of the House standing committees were each tasked with developing policy documents in six areas: health care, taxes, national security, regulatory reform, poverty and reasserting Congress’s constitutional authority.

On taxes it’s pretty safe to assume what they have in mind: “pro-growth” rate cuts for rich people and magical mathematics to paper over the revenue losses. And whatever they come up with for healthcare will likely be a vague non-starter. But it’s better than nothing, I suppose. For me, the most interesting aspect to all this, both in terms of policy and politics, is the issue area that is conspicuously absent from all of this: immigration.

Immigration reform, you will probably recall, was at the center of the GOP’s post-2012 efforts at revamping the party’s image and expanding its demographic appeal. And the party did briefly line up behind comprehensive immigration reform before conservatives in the House killed the legislation. Since then, the party hasn’t touched the issue except to vote to increase deportations and threaten to shut down the Department of Homeland Security over President Obama’s immigration orders. Apparently they’re in no rush to define a conservative immigration agenda that goes beyond “deport everyone.”

On the political front, the lack of a clearly defined immigration policy is a huge vulnerability, especially if Republicans are looking for ways for down-ballot candidates to escape the Trump/Cruz policy trap. Both candidates have spent much of the 2016 primary trying to outflank each other from the right on immigration, and Trump in particular has made immigration a toxic issue for the GOP with his inflammatory rhetoric and draconian policy proposals. The two of them are successfully defining the Republican Party as an aggressively anti-immigrant institution. A new poll out from America’s Voice/Latino Decisions asked Latino voters their opinion of the Republican Party, and 73 percent said the GOP either doesn’t care about Latinos or “is sometimes hostile towards Latinos.” Over 40 percent of respondents said the party had become more hostile to Latinos in recent years.

The two frontrunning candidates themselves have dismal ratings among Latino voters. Trump’s unfavorable rating stands at an almost unbelievable 87 percent. Cruz, meanwhile, is deeply underwater with a -18 favorability split. They both get murdered by the Democratic candidates in head-to-head hypotheticals, with Ted Cruz taking just 29 percent of the Latino vote and Trump pulling down a laughable 11 percent.

It will be these two deeply hated candidates who will be driving the immigration policy discussion for the GOP. With no positive policy accomplishments to point to and no alternative agenda from the congressional leadership, it will be difficult for Republicans to put distance between themselves and Trump’s talk about blackmailing Mexico to pay for a border wall. For Republican candidates worried about how a Trump/Cruz nomination could hurt their chances in November, this is bad news.