We now have proof Trump's a fraud: Confirming what we thought, new campaign manager admits Trump's been playing a "part" the whole time

If you've suspected all along that Trump's routine was phony, you now have confirmation. 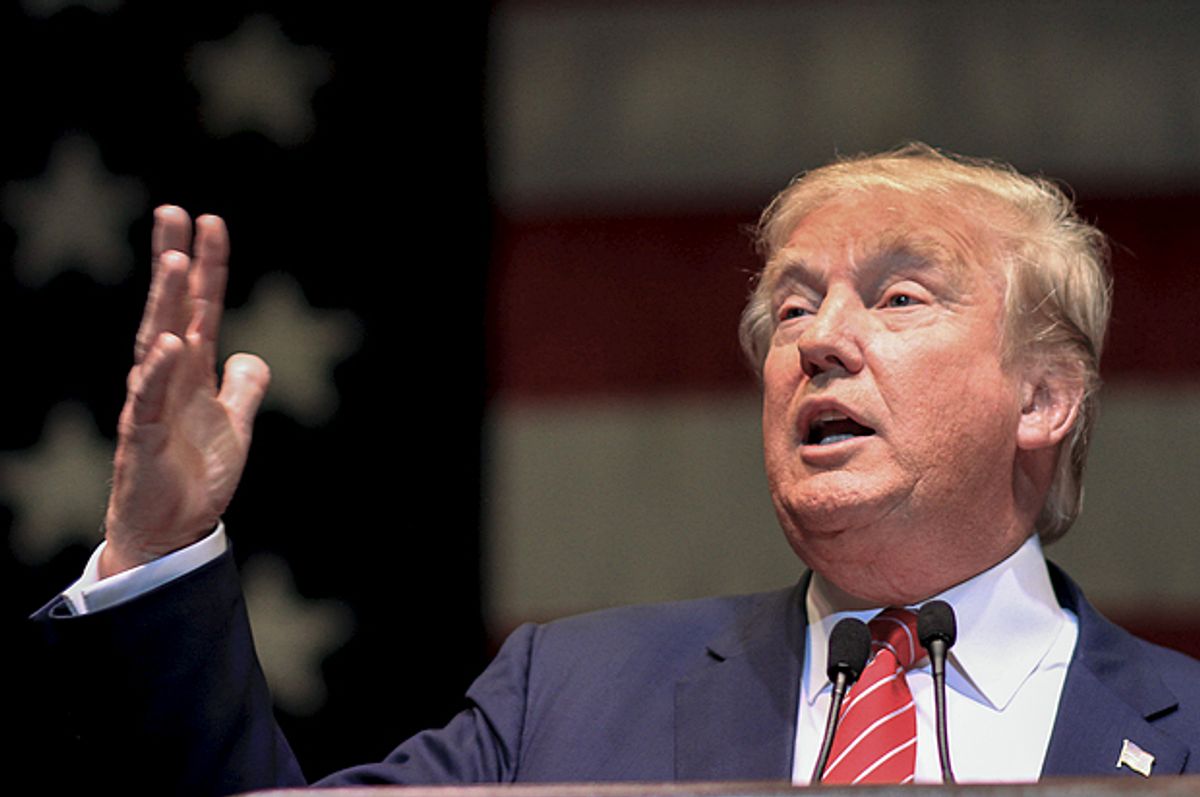 “Fixing personality negatives is a lot easier than fixing character negatives. You can't change somebody's character, but you can change the way a person presents himself.” – Paul Manafort

The above quote is from Donald Trump's new campaign manager. Along with Rick Wiley, Manafort was hired recently to “professionalize” Trump's operation. What he says here is both revealing and profoundly wrong. How a person presents himself, or more to the point, how far a person is willing to go in order to project an image of himself, says a lot about who he is.

If a man is willing, as Trump clearly is, to say or do anything in the name of self-promotion, if he shape-shifts and contradicts himself on a whim, if he says things he knows to be untrue and dangerous because he thinks it will win him the news cycle, does that not reveal his character? Trump is either a nihilist or a fraud. In either case, his personality and character are inextricably bound.

But Manafort's grand new plan is to convince the Republican establishment that this isn't who Trump really is.

A fascinating report by The New York Times offers a glimpse into Trump's post-New York strategy. All that talk about the “rigged system” and the hopelessly corrupt establishment is gone. Turns out Trump wasn't serious; he was playing a role, you might say. His frenzied supporters might be surprised to learn this, but this is what Trump's new handlers want us to believe.

On Thursday night in Hollywood, Florida, Manafort met with members of the Republican National Committee to reassure them that Trump is on board and prepared to work with the establishment he's so thoroughly denounced on the campaign trail. “Addressing about 100 committee members at the spring meeting here, many of them deeply skeptical about Mr. Trump's candidacy,” Jonathan Martin and Jeremy W. Peters write, “the campaign chief, Paul Manafort, bluntly suggested the candidate's incendiary style amounted to an act.”

“That's what's important for you to understand,” Manafort told the committee members, “That he gets it, and that the part [emphasis mine] he's been playing is evolving. The negatives are going to come down, the image is going to change, but Clinton is still going to be crooked Hillary.”

Manafort also made it clear that Trump's intention is to seamlessly fold his campaign into the party apparatus that he says – or has said – is broken and part of the problem. “He [Trump] gave us the mandate to bring together a team of professionals that could finish the job for him,” Manafort said, “but could also then begin to link in with the establishment institutions that part of our party, what you represent, what the state parties represent.”

Consider what Manafort is conceding here. If you've suspected all along that Trump's bullshit routine was, in fact, bullshit, you now have confirmation. Manafort himself called Trump's shtick an “act,” which is to say it's a performance and thus not real. The Donald has spent the majority of his campaign lampooning establishment politicians, those low-energy losers who have driven the country into a ditch. Hell, most Trumpites, when asked why they support him, can offer only one reason: he's not the establishment.

And yet Manafort is saying, albeit at a closed-door meeting, that Trump is really aligned with the establishment; it's just that he's been playing a “part” all this time in order to hoodwink his angry – and confused – base. This is a stunning admission, which ought to cause an uproar among those who mistook Trump's bullshit for honest indignation. Don't hold your breath, though. The credulity of the average Trump voter shouldn't be underestimated. Anyone who thinks the Donald is sincere and should be president is already a mark. If he wants to run an “inside-outside campaign,” as Martin and Peters put it, bashing the establishment on the one hand and quietly coordinating with them on the other, that's exactly what he'll do.

And his supporters will happily take the bait.