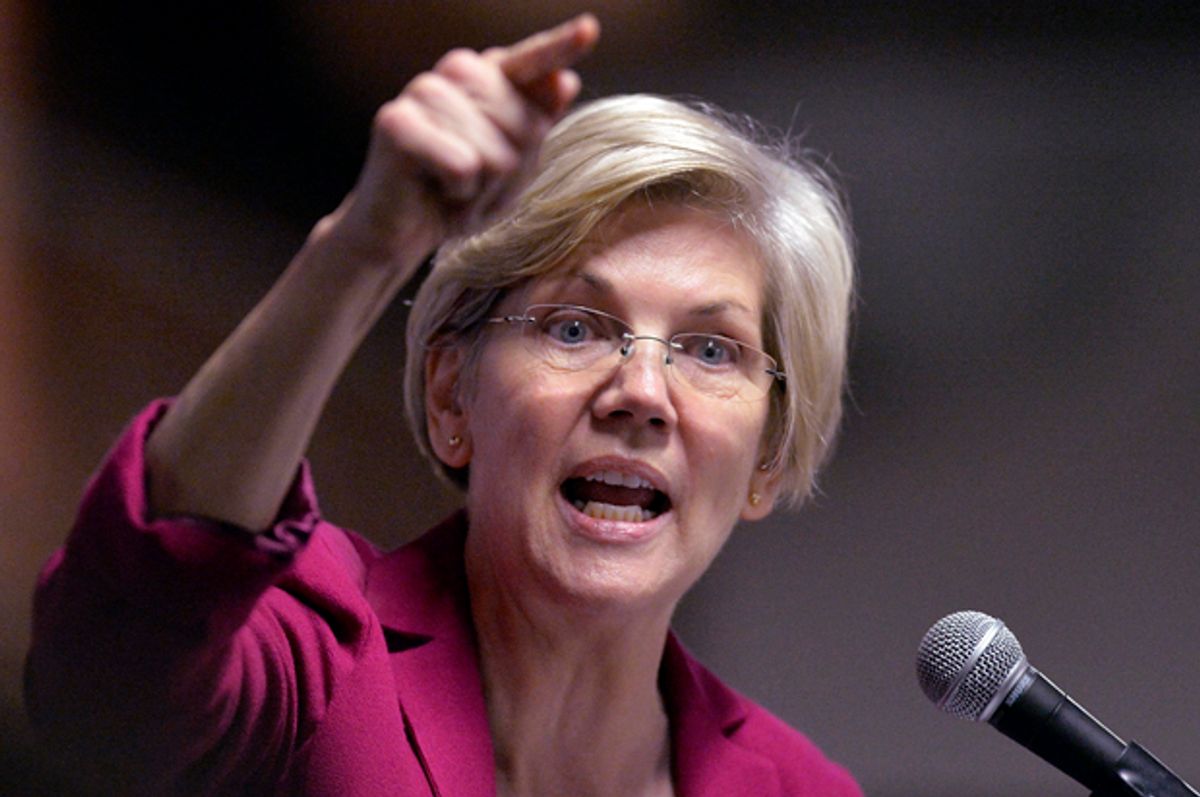 Are you in the market for some good news? While everyone is being told to follow the excitement of the 2016 campaign to the exclusion of all else, out of the spotlight but not far away, the Obama administration is calmly trying to enact lasting progressive change. In the Labor Department earlier this month, consumer advocates won a big battle, as the vast middle class was “gifted” with a new requirement being placed on the financial services industry. As Massachusetts Sen. Elizabeth Warren explained, a glaring conflict of interest has been resolved in the favor of people saving for retirement. No longer can investment advisers recommend funds to their clients that reward them or their firms; instead, they must, without exception, direct customers into the best financial products, with lower or, sometimes, zero fees.

In her inimitable style, Warren crowed: “No more pushing products that generate financial benefits for advisers, while draining the customer’s savings.” It’s a very simple principle: “No more free vacations, cars, bonuses, fees, and other kickbacks.” Her mantra, as we know, is fairness. Her legislative agenda is to introduce new legal protections for consumers. She is quick to point out that most financial advisers are ethical, and work hard to help their clients. But these individuals have, for many years, been forced to compete with “slick-talking” advisers whose recommendations reflect personal incentives and produce “terrible results” for middle-class savers, amounting, the Labor Department says, to many billions of dollars.

Firms must now make a full disclosure. Facing the music, the largest independent company that manages retirement savings, with $450 billion in retirement assets, right away cut account fees for investors by “up to 30 percent.” Retirees win. The system can adapt. As Warren stated: “Americans are tired of a Washington that works great for the big guys and doesn’t work for anyone else.”

You know who she sounds like? Frances Perkins, Franklin D. Roosevelt’s secretary of labor for the entirety of his presidency, and the first female cabinet member in U.S. history. She should never be forgotten. Having personally witnessed the Shirtwaist Triangle fire of 1911, a tragedy in New York’s Greenwich Village that took the lives of 146 garment workers, a young and inspired Fannie Perkins resolved to devote herself to the cause of the American worker. As the accomplished business journalist Kirstin Downey lays out in her 2009 biography, Perkins pushed constantly for child labor laws, for safety regulations and a host of other fair labor practices. To prevent workers from descending into poverty, she urged compensation for workplace injury; she saw to the imposition of a minimum wage for the first time--which in the mid-1930s was around 45 cents an hour--and she pioneered unemployment insurance as we know it.

As compellingly up-front, if perhaps less pleasantly in-your-face than Warren is, Perkins told FDR when he was president-elect to think twice about naming her to the cabinet: “If you don’t want these things done…, I’d be an embarrassment to you.” She fed public demand. Fortunately for Roosevelt’s own historical reputation, he was not afraid of a strong woman. It is arguable that, were it not for Secretary Perkins, Social Security would never have happened.

At the same event at which Warren spoke, Sen. Cory Booker put in his own two cents when it came to the resistance of established financial firms to the “best interest standard” that the DOL has given life to. The New Jersey senator called the previous system that for so long “bilked” investors of their retirement saving “an assault on the ideals of this country.” Under the old rules, brokers only had to honor a level of ethical performance that was euphemistically called a “suitability standard,” and Republicans predictably complained that the Obama administration was trying to place “an undue burden” on finance professionals. Booker, like Warren, would have none of that. “We’re not surrendering to cynicism in this country,” he challenged.

With many billions of dollars now saved through the new requirement on financial advisers, we should all be giving renewed attention to the fight for a fairer minimum wage. California and New York have announced a raise from the current federal minimum of $7.25/hour to $15.00/hour. Los Angeles mayor Eric Garcetti explained the common-sense thinking that went into the decision: “Poverty is bad for business.” CEOs and small business owners alike, he said, “understand the impact economic justice can have on the workforce and the local economy—better paid employees are more likely to stay on the job, and when folks have more money in their pockets, they spend it.”

Secretary of Labor Tom Perez, who previously led the Civil Rights Division of the Justice Department, has been acting in the best tradition of his hard-charging predecessor in standing up for the American worker and for all retirees. In fact, in his blog on the DOL website he states that a portrait of Frances Perkins hangs proudly above his desk. She brought about the Fair Labor Standard Act of 1938, which continues to set minimum wage and overtime pay standards. The old rationale that minimum-wage jobs are for teenagers, or a stepping-stone for adults, and therefore should not be tampered with too severely, is misleading. According to the Bureau of Labor Statistics, 80 percent of hourly wage workers are over age 25; and the Economic Policy Institute states that 26 percent of the workforce earns less that $10.55/hour. Of the 22.9 million American workers who stand to be affected by a prospective increase in the federal minimum wage, over 80 percent are at least 20 years old; one-quarter are either single parents or married parents. The emotional, as well as financial, health of families is at risk.

For quite some time, our flat minimum wage has not reflected gains in worker productivity. President Obama and Senator Warren have been pressing for an increase for three solid years now. The family values voters out there--that is, if we define “family values” the way it should be done--are clearly in favor of a sensible minimum wage hike. Warren tells the story of how, when she was 12, her father suffered a heart attack and her mother was forced to take a minimum-wage job at Sears; at that time, it was enough to save the family from losing their home.

For all kinds of reasons, Warren has been out on the front lines, constantly reminding all who will listen that we need watchdogs in government. And like Secretary Perkins before him, Perez is helping to realize the progressive reforms President Obama is intent on accomplishing in his final year in office. Booker said it best: “This fight ain’t over.”