Our voices are not all equal: Inequality, your vote -- and some surprising common ground between Donald Trump and Bernie Sanders supporters

Trump, Sanders differ on many issues, but backers share a critique of inequality that could bring needed change 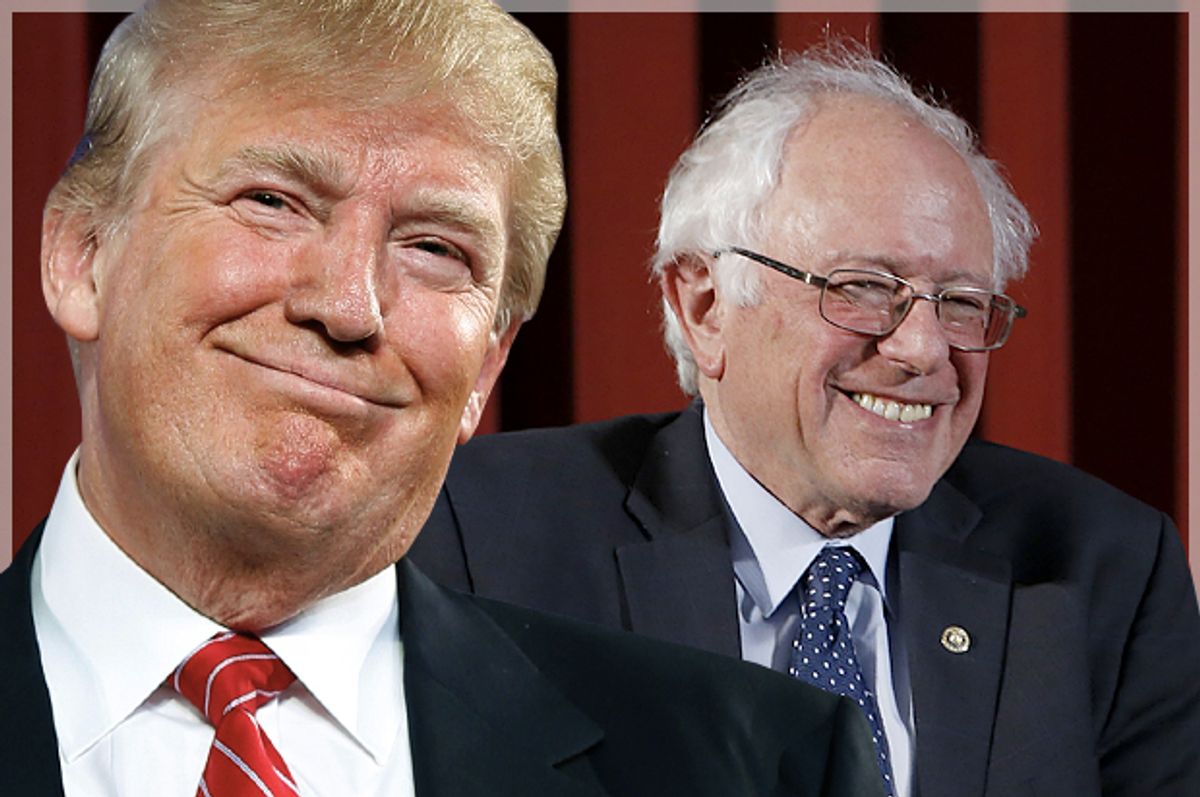 This noisy and confusing election season has demonstrated that many Americans feel that their voices are not being heard in politics.  In fact, as long as we have had the tools to measure it, American democracy has been characterized by unequal political voice.  Is there anything that can be done about the fact that, when it comes to politics, some people -- in particular, the well-educated and affluent and, therefore, non-Latino whites -- have a megaphone and others speak in a whisper?

The last decade has witnessed contradictory changes with regard to equalizing political voice.  Many states have quietly sought to lower barriers to turnout.  A majority of states have adopted measures like early voting that make voting more convenient.  Nearly three-quarters of the states now facilitate voter registration by providing for election-day or online registration.  A few pre-register high school students so that they are all set to vote when they turn 18.  Alas, once registered, such efforts to get young voters to the polls yield modest results.  What is more, even reforms like election-day registration that unambiguously raise turnout do not necessarily decrease inequalities in turnout.  Even when more voters show up at the polls, the effect may be only an increase in the kinds of voters who are already casting ballots rather than an electorate more representative of those eligible.

In an era when the parties are evenly matched electorally and far apart ideologically, savvy politicians know that electoral gains may be realized by making it harder to vote.  Since 2000, a majority of states have raised barriers to voting by enacting or strengthening the requirements for showing identification in order to cast a ballot.  Although voter ID laws are generally popular with the public, the politics of the enactment of voter ID laws have become extremely partisan.  Since many of the laws do not kick in until this year, we do not yet know whether voter ID laws will dampen turnout and, if so, whether they will have a disproportionate impact on the less well-educated and persons of color.

Moreover, in Shelby v. Holder (2013) the Supreme Court held unconstitutional both the requirement in the Voting Rights Act of 1965 that jurisdictions with a history of voting discrimination must submit proposed changes in voting procedures for federal “preclearance” and the formula that determines such jurisdictions.  At this point Congress has declined to update the VRA to bring it into compliance with Shelby.  Once again, it is too soon to know what the effect will be at the polls.

A series of judicial decisions, of which the best known is Citizens United (2010), have defined campaign contributions as a form of constitutionally protected speech.  The consequences of these decisions for equal voice are now becoming obvious.  Not only have the sums skyrocketed, but campaign giving has become more and more concentrated: increasingly large shares of the total arise from a minuscule fraction of the public.  Last week, The Washington Post reported that a mere 50 donors were responsible for nearly half, 41 percent, of the more than $600 million collected so far by Super PACs in this election season.  In short, the campaign finance environment is changing dramatically in ways that, if anything, allow the very affluent to speak even more loudly in politics.

Can we do anything to ameliorate these inequalities of political voice?  Unfortunately, it seems that anything that would make much difference is currently either politically infeasible or constitutionally proscribed.  That said, neither the current poisonous partisan environment, which is hostile to equalizing steps, nor current constitutional interpretation, which rules out many kinds of reform, is necessarily permanent.

In fact, who would have thought that this year's presidential race would feature robust attacks on the center of each party by candidates who criticized Wall Street, free trade and the political gridlock?  Although Sanders and Trump differ in many ways and on many issues, their appeal is based on an economic populism rooted in concerns about economic inequality and the political power of the establishment.  Will this year’s surprising developments prod political leaders in both parties to start thinking more seriously about ways to ameliorate economic and political inequality?  Will they consider reducing the role of money in politics through public financing of elections or facilitating voting through same-day registration in every state?  It seems less far-fetched today than it might have a year ago.