They dumbed down conservatism: How extreme right-wing market fundamentalism captured the GOP -- and endangered the environment 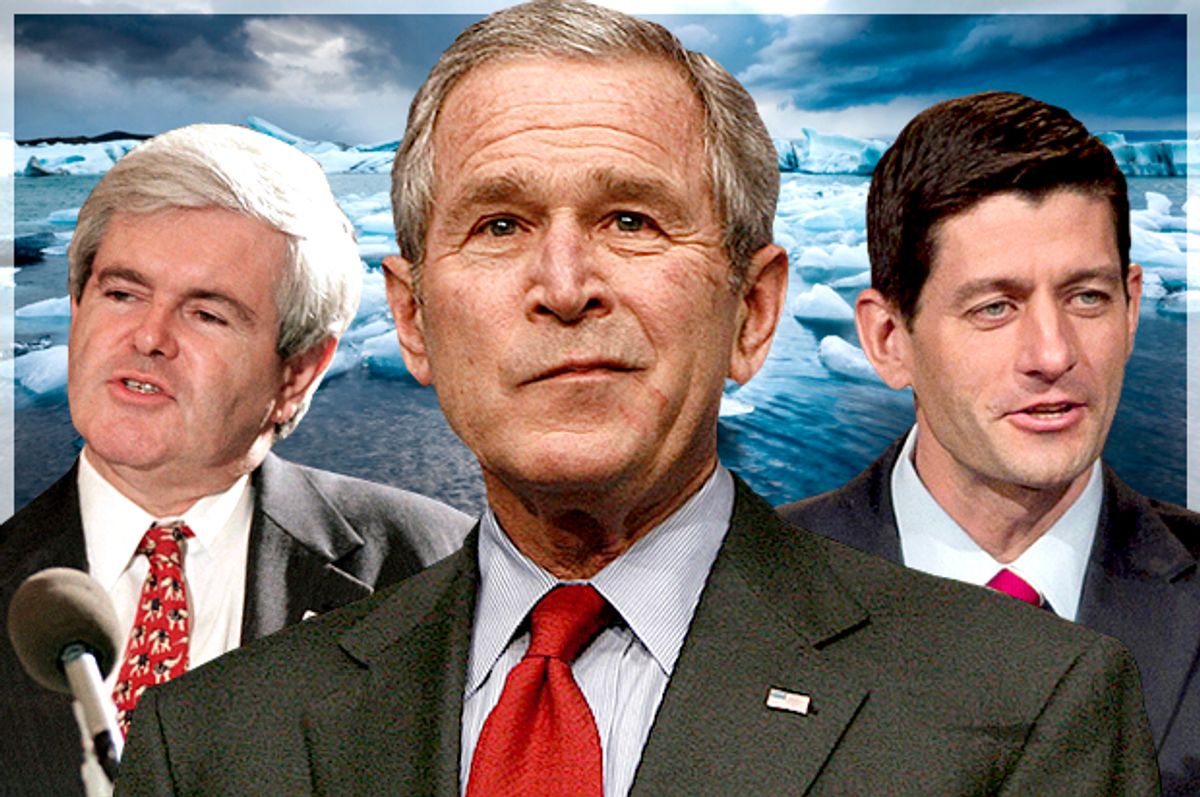 Excerpted from "Getting to Green: Saving Nature: A Bipartisan Solution"

The “Republican Revolution” launched in 1995 drove the party hard to starboard by crystallizing and embedding in American conservative culture a new orthodoxy, much of which was deeply hostile to environmental goals.

Most enduringly, it succeeded in adding “the environment” to a political litmus test for Republicans that endures to this day: the true conservative must embrace the conviction that environmentalism is an elitist movement whose goals come at the cost of jobs and economic growth and thus is indifferent to the needs of ordinary people; a conservative must reject “command and control” environmental regulation and even the premise that environmental problems require government solutions; and finally a conservative believes that our constitutional “property rights” require us to dismantle our system of public lands and prohibit most ordinary land-use regulations.

These three major planks of what many call “market fundamentalism” share the same essential flaw: they take old conservative ideas and dumb them down by stripping them of all subtlety and nuance, in the process perverting their meaning to something completely at odds with the traditions of principled conservatism. These three ideas have sustained the Great Estrangement for the past two decades, and understanding them is key to finding an end to it.

During the Cold War, conservatives defended capitalism against competing economic systems, communism and socialism, which had claimed the mantle of history and swept much of the globe. This struggle was difficult and vital, and it preoccupied conservatives between 1917 and the collapse of the Soviet Union in 1991. During this period the more nuanced debate around the appropriate degree of laissez-faire in our market system was less urgent and less intense. After the end of the Cold War, the American right turned its sights inward, rejected European models of capitalism that were more social in their orientation, and gradually emerged as the champion of a type of market fundamentalism that provided the intellectual foundation for the new anti-environmental orthodoxies.

The emerging market fundamentalism owed its quick ascendency within the GOP to the concerted efforts of a newly sophisticated network of well-funded organizations such as the Cato Institute, the Heritage Foundation, and the Mountain States Legal Foundation. The anti-Green ideas that the 104th Congress brought to Washington may have gotten their start in the Sagebrush Rebellion of ranchers in Nevada, Utah, and Wyoming, but they were nurtured and given a veneer of legal and intellectual respectability in the conference rooms of inside-the-beltway think tanks, by people whose salaries were paid by foundations with names like Scaife, Koch, Coors, and Olin.

Calvin Coolidge famously said, “The chief business of the American people is business.” Market fundamentalists have now perverted this rhetorical tautology into a harmful falsehood: that whatever imposes costs or limits on business has the effect of “killing jobs” and therefore is a bad thing. The false dichotomy between economy and environment has been one of the most insidious—and politically successful—features of the new-right orthodoxy. It is a paradigm that has no room for nuance, and can be applied indiscriminately to oppose as a “job killer” anything disliked by a specific business or industry.

The argument is that if compliance with an environmental law, regulation, or goal costs a company money—and it almost always does in the short term—then it hurts revenues and profits, and thus jobs and the economy. When the choice is formulated as “X vs. jobs,” whatever takes the place of X, whether it is spotted owls or snail darters or global sea level rise, loses.

This idea came into full flower in conservative circles in the 1990s. It became a matter of faith among antienvironmentalists that the Green movement’s success in having the northern spotted owl listed as “threatened” under the Endangered Species Act cost at least thirty thousand forest industry jobs in the Pacific Northwest, even though mill modernization, overseas competition, and declining demand all may have been equal or greater contributing factors.

A decade later, the economic case against environmental protection became a governing principle during the eight years of the George W. Bush administration. His undersecretary for natural resources and environment in the Department of Agriculture, Mark Rey, an advocate for logging the national forests, put it clearly: “We should start with the premise that a policy cannot be good for the environment if it is bad for people.”

What people want most, the argument goes, is jobs, wealth, and cheap gas; they want a clean environment too, but not at the expense of the things they want more, and they don’t really care at all about wilderness, endangered species, minute amounts of toxins, sprawl, predictions of far-off changes in the climate, and the other things that seem to motivate the wonky elites from the coasts. Painting environmental protection as inconsistent with the things that people want most was an astute and successful political strategy for the foes of the Green movement.

The enduring success of that strategy is harder to explain, though, because in most cases the economic-cost argument is simply not true, nor is it accepted by a majority of Americans. Economy vs. environment—-no matter how well it plays with the conservative base—is in fact a false dichotomy. Many environmental initiatives, such as the reduction of acid rain, have resulted in net economic benefits to society. Even during the period between 1974 and 1985, when pollution control regulation was indeed imposing significant costs on utilities and industry, a Harvard study found that the investment capital diverted to pollution control reduced gross national product by an average annual rate of less than 0.2 percent, and that is without in any way accounting for the offsetting economic benefits achieved by cutting pollution, such as the lower cost of health care resulting from reduction in pollution-related illnesses. There is no empirical evidence that sound environmental policy hurts economic competitiveness, and much empirical evidence that the environmental regulation in the latter part of the twentieth century actually spurred both innovation and competitiveness.

Happily, many Americans seem to understand this. In a 2012 bipartisan poll commissioned by The Nature Conservancy, voters were twice as likely to say that protections for land, air, water, and wildlife have a positive impact on jobs (41 percent), rather than a negative impact (17 percent). More voters viewed conservation as having a positive impact than a negative impact in every region of the country, even in the western United States, where there are significant holdings of public lands.

But neither the evidence over a long period of experience with environmental regulations nor the sensible views of a plurality of American voters matters to “movement” conservatives. From the mid-1990s on, right-wing market fundamentalists did what business itself did not succeed in doing in the 1970s and 1980s. They convinced large numbers of otherwise rational people that virtually any further environmentally motivated limitations on business should be opposed as being bad for the economy. By 2002, the New Yorker was calling this argument the “unwinnable trench war between conservation and commerce.” We will never get to Green so long as it continues.

Frederic C. Rich is an author, lawyer and environmentalist. His next book, Getting to Green, will be published by W.W. Norton in April 2016.