Countdown to the RNC apocalypse: Republicans still can't control Trump as the clock ticks down to the convention

The Republican National Committee just met for the last time before the convention, demonstrating its lack of power 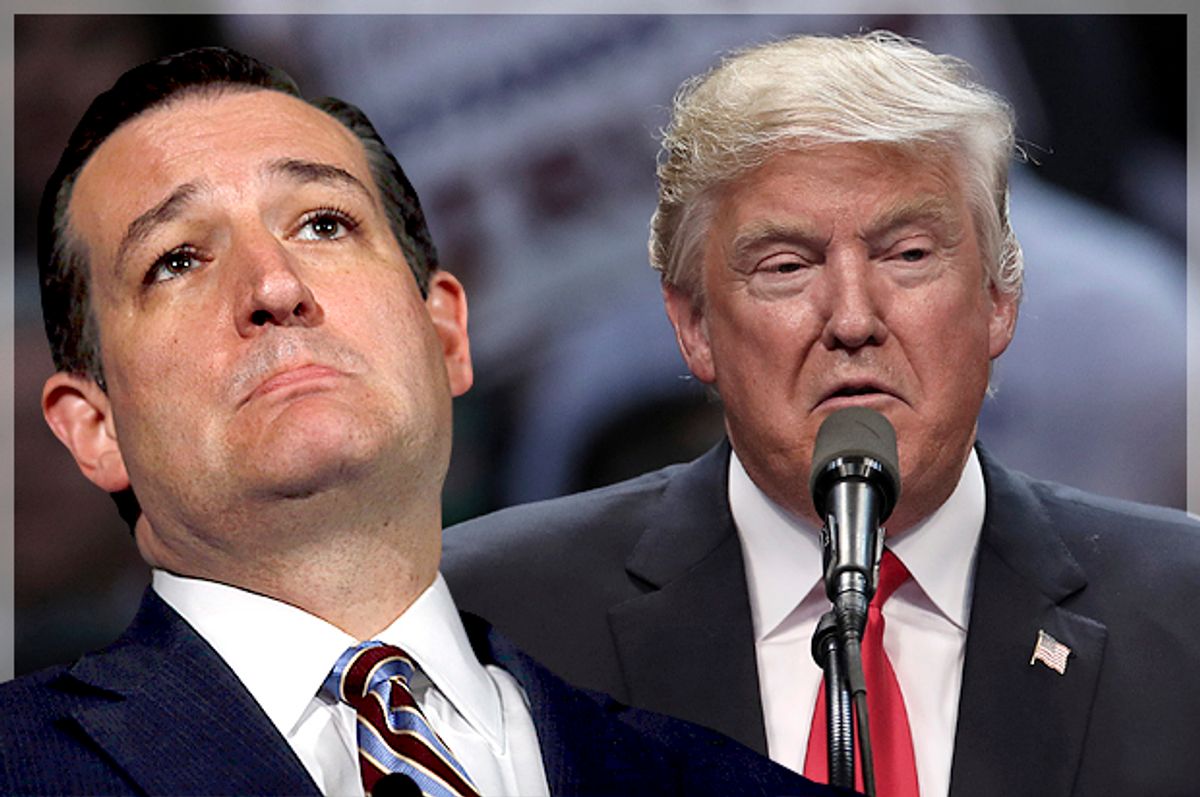 Even in an election year, the quarterly meeting of the Republican National Committee would likely attract little to no attention. Why should it? Three days of a couple of hundred Republicans gathered at some nice resort to hear some speeches, drink bourbon and glad-hand sounds pretty much like one of Rush Limbaugh’s weddings, which occur almost as often.

But this is no ordinary election year, which is why last week’s RNC meeting garnered more press coverage than usual. It was the last meeting before the party’s nominating convention in July, which meant a last chance for the establishment to exert any influence on the conduct of the proceedings in Cleveland, and for the candidates or the surrogates attending in their stead to make their pitches to party insiders.

This last part led to Ted Cruz pretending that the assembled RNC members were not the establishment figures he has spent his entire Senate career railing against, but were instead the grassroots of the party, the heart and soul, the true conservatives sold out by the Washington cartel. Cruz is really flailing, trying to come up with a new identity for himself. He has spent a year portraying himself as a bomb-thrower who would energize conservatives, leaving squishy establishment moderates in his dust. Now that he has realized how difficult it is to win the nomination if everyone in the party thinks he’s a hateful dick, he’s trying to be conciliatory with insiders while not giving up pandering to the fears of the hard right voters who want to regulate which bathrooms people are allowed to use. It is a bad time for an identity crisis, which is why you have to wonder if the normally unflappable Cruz is melting down as he sees his dream of becoming president slipping away.

Cruz’s floundering highlights just how uncharted this election’s territory is for the RNC members gathered in Florida. A less fractured party, one where the RNC is an actual power center helping to order events rather than scrambling to keep up with them, would use such a meeting to enforce discipline and start unifying the GOP before the convention. Some members could take Donald Trump’s surrogates aside (Trump was the only candidate to not attend the meeting) and tell them to let their boss know that they are working hard to smooth the way for his coronation in Cleveland.

Others would take Cruz and John Kasich for long walks along the Florida shore, like Carlos Trafficante having a come-to-Jesus moment with one of his wayward capos. During these walks, RNC members would make clear to the candidates that their futures as members in good standing of the Republican Party depend on how much longer they stay in the race, sniping at the front-runner and giving the Democrats ammunition for the general election. A few promises are made -- to support presidential runs in 2020 or later, or campaigns for other elected office. (Cruz is up for re-election to the Senate in 2018.) But the overall message would be clear: Get out now, or we’ll get you out.

But the RNC can’t do that, because it has no power. Any favorable nods towards Cruz or Kasich risk alienating Trump voters, who have so far made him the frontrunner by a lot, and who are constantly being egged on by Trump’s telling them the party has “rigged” the primary to take away the nomination. (These speeches have had the cumulative effect of bringing a small handful of Trump’s crazier supporters out of the woodwork.) Any hints of pushing a compromise candidate if no one gets a majority of delegates on the first or several subsequent ballots at the convention will get shouted down by activists. Basically, the RNC is in a no-win situation.

So everyone walked a fine line. RNC chairman Reince Priebus, perhaps the saddest figure in national politics right now, seems to have capitulated to the near-inevitability of Trump’s nomination. In Florida, he gave a speech in which he told the “Never Trump” forces that they are going to have to quit that campaign and start unifying behind the party. Which should be easy, since the “Never Trump” campaign has been nearly invisible for weeks now, barely spending any resources in New York before last Tuesday’s election, which might have put Trump over the top. A real party chairman would have been cracking heads. Priebus is reduced to pleading with everyone to believe him when he says that the process of selecting a nominee will be conducted fairly.

The most significant news to come out of Florida was that the RNC’s 56-member rules committee voted down a proposal to change the procedural rules used to govern the floor during the convention. The current method is based on that used by the House of Representatives, which gives enormous power to the convention chair to decide motions and keep things moving along. The rejected proposal would have switched the convention to Robert’s Rules of Order, which would have given much more power to the 2,500 delegates who will be seated in Cleveland. Any of those delegates could hold up proceedings with objections to convention business, requiring extra votes to get things moving again and likely ensuring a much longer, more frustrating convention.

Ironically, the convention chairman who will preside over the floor is Speaker of the House Paul Ryan, who has found himself unable to move business through the House partly because he has devolved some of his power back to committee chairs and other members of his caucus. If he’s as successful at running the convention floor as he is at running the House of Representatives, it is entirely possible the delegates will still be sitting in Quicken Loans Arena when the November election rolls around.

But that’s for later. For now, the RNC members look like the rest of the party and many observers have for a solid year: Standing around scratching their heads, trying to figure out what the hell is going on and, wondering whether they can climb out of this mess.