It's all just wrestling to Donald Trump: Everything the GOP front-runner knows about politics, he learned from the WWF

Trump was trained not only in reality TV but in wrestling -- a world of heels, heroes and dumb bravado 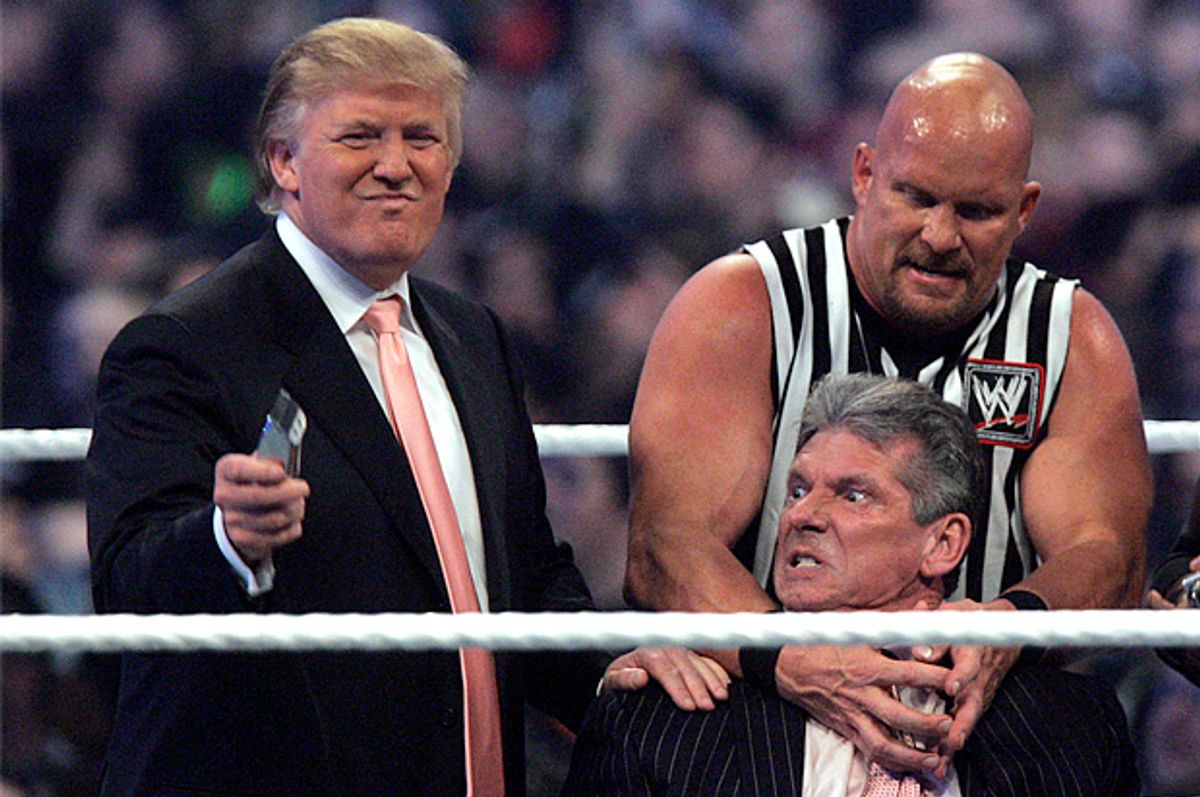 I remember going to the corner drug store to buy comic books when I was 7 or 8 years old. They were in a rack next to the magazines. Seeing nothing that inspired my curiosity, my eyes wandered to the covers of some nearby professional wrestling magazines. On them were photos of men, some wearing tights, others in jeans, whose faces were covered in blood. At the time, like many people, I believed professional wrestling was real. Years later, I would learn that it was a physical competition with a (more or less) predetermined outcome. The skill of the wrestlers, and the entertainment value of the “sport,” was, at least for me, no less diminished by that fact.

Professional wrestlers use various means to make themselves bleed during a match. Some will cut themselves with a carefully hidden razor blade. Others will allow a more experienced competitor to hit them hard enough to break the skin above the eye or on the scalp. Of course, a person can be busted open “the hard way” when they accidentally hit the turnbuckle, a pole, the stairs, a table, or some other hard object. In some situations, a wrestler would fill up a condom with his own blood, place it in a bucket of warm water, and then later put it in his mouth. Once the condom was bitten into, it would produce copious amounts of blood from the mouth and nose.

The blood in a professional wrestling match is an integral part of the drama that takes place inside the ring. It excites the audience; the blood can earn a wrestler either sympathy or disdain from the crowd. Ultimately, the blood of a wrestler is almost a ritualistic offering from the competitors to the crowd.

Donald Trump is a political performance artist whose repertoire is inspired by professional wrestling.

He has not (yet) cut his forehead open with a razor to elicit awe, wonder, and sympathy from his followers. But given the violence at his rallies, who knows what the future holds?

Trump has been involved with professional wrestling for several decades. He is friends with Vince McMahon, the owner of the World Wrestling Federation. Trump’s hotels and casinos have hosted the annual Wrestlemania event—the Super Bowl of pro wrestling. Trump has even appeared at Wrestlemania, where in a “hair versus hair” match, he shaved the head of Vince McMahon. World Wrestling Entertainment acknowledged Trump’s many years of association by inducting him into their hall of fame in 2013.

And now Trump has taken the lessons he learned from those experiences and deftly applied them to his presidential primary campaign.

Professional wrestling is a type of classic storytelling that revolves around heroes and villains. In the language of professional wrestling, the hero is the “face” and the villain is the “heel.” While the boundaries of these archetypes have changed over time, there are certain norms that have remained relatively constant. The “face” wants the sympathy and respect of the audience. He or she has a code of honor. They also, for the most part, do not cheat to win. The “heel” has no such limitations. The heel will lie, cheat, dissemble, and do anything to win a match. The heel also insults and condescends both to the wrestling audience and his rivals. Ultimately, he only cares about obtaining the object of his personal desire—this could be money, power, sex, glory, fame, the championship, or in some cases, just playing the role of a chaotic spoiler who lives to humiliate and brutalize the “good guys.”

A great heel also plays the victim: he or she was not really “pinned” in the ring; there is a conspiracy; “winning” was never the point anyway as there is a greater goal to be achieved.

There are different versions of the “heel” persona. Vince McMahon plays the cruel and manipulative corporate CEO and robber baron who cares about nothing but maintaining and expanding his power. During the 1980s and 1990s, the (then) World Wrestling Federation’s “Million Dollar Man” Ted DiBiase would humiliate the fans, mocking them as poor and working-class “slobs.” Nick Bockwinkel and Ric Flair were playboy millionaire villains who dressed better than their rivals, had more money and success than anyone else, and the charisma and confidence to get anything they wanted out of life. In today’s World Wrestling Entertainment, Kevin Owens is a heel who plays the role of a schoolyard bully.

Trump borrows from all those “heel” personas. He insults women by calling them “ugly” and implying that their menstrual cycles make them irrational. Trump has questioned the masculinity and character of his Republican rivals. Marco Rubio is “Little Rubio.” Ted Cruz is “Lyin’ Ted.” Trump boasts about the size of his penis and the beauty of his wife Melania. In true “heel” form, Trump is “great” and “amazing.” His rivals are not “real men.” They are “low energy” “losers.”

He also wins over the support of his fans by decrying “political correctness” and urging them to beat up and otherwise abuse anyone who disagrees with his agenda. Trump is also a professional victim, who claims that both he and his supporters are being treated “unfairly” by the news media, protesters, the Republican Party, and any other group that has earned his ire.

The manner in which The Donald works—works up?—his audiences while stumping is vintage WWE. Watch the mannerisms. Walk to the mic, and the crowd quiets. Walk away, and the decibel level rises. Step back to the podium, step away, all the while pumping up a throng that is ready to hang on every word and thought. Everything plays out the way it would if the event were happening from a wrestling ring on Monday Night Raw. And with good reason: Trump was enmeshed on WWE TV in one of the most successful storylines in company history.

Trump also uses emotional appeals communicated in extemporaneous speeches that are delivered at a fourth-grade level, which are designed to manipulate the most base passions of his public. For example, Trump uses slogans and tag lines about America’s “greatness” and how “big” and “wonderful” his ideas are. As a heel, Trump is also duplicitous and contradictory: he makes claims and promises that he then denies or evades when they are no longer of use.

Trump is a perfect presidential candidate for our “post truth” era. During the 1960 presidential election, Richard Nixon was defeated by John F. Kennedy because, in part, he had not mastered the optics of television. But Trump is a reality TV show character turned GOP frontrunner. He is winning because his outlandish behavior has given him billions of dollars in free publicity from a corporate news media that is desperate for ratings. Moreover, Trump’s professional wrestling persona allows him to effectively communicate with his aggrieved, angry, racist, and alienated white “working class” and low-information public in a way that establishment Republican candidates cannot. Trump literally and figuratively speaks the language of the Republican base and is a hero (while simultaneously being a villain for the rest of the American public) who they can live through by proxy.

Donald Trump’s initial foray into the 2016 Republican presidential primary likely began as an effort to expand his personal brand by engaging in a reality-TV-show-like experiment with politics. At some point, he realized that he could win the Republican nomination. His ego and narcissism then demanded that he stay in the race.

Trump’s political performance art is evocative of the late comedian Andy Kaufman’s genius experiment with professional wrestling. Kaufman, a lifelong fan of the sport, wanted to manipulate the expectations of the American people by playing a heel wrestler who had come from Hollywood to humiliate the “hicks” who followed the sport.

Kaufman created his own championship belt, dubbing himself “The World Intergender Champion.” He would only wrestle women. He would mock and humiliate them. Kaufman loved being a heel, loved the boos and threats of violence raining down on him in the ring. He would eventually get his comeuppance at the hands of Jerry “the King” Lawler on the David Letterman Show. For Kaufman, it was all postmodern theater that collapsed the lines between “truth” and “fiction.”

Trump does not possess Andy Kaufman’s intelligence. Nor is Trump trying to make an incisive critique about the nature of reality and the dividing line that separates (or not) an actor and his or her persona. But, there are moments when Trump the character and Trump the person seem inseparable, and he/they do and say things that are unbelievably offensive and bizarre. The American public is left shocked and amazed (is he serious? this cannot be happening!) while they and the news media are transfixed by it all.

Donald Trump is the greatest villain in American politics today. He learned those lessons—and is using them to great effect—from professional wrestling. “The Donald” is a heel. And as they say in the parlance of professional wrestling, Trump is enjoying a “monster run,” which may end with him in the White House.

This piece was first published by the Washington Spectator