This third party would keep Hillary honest: Bernie Sanders backers must become a Tea Party of the left

Hillary returns to her neo-con, triangulating roots in a nanosecond unless progressives keep up intense pressure 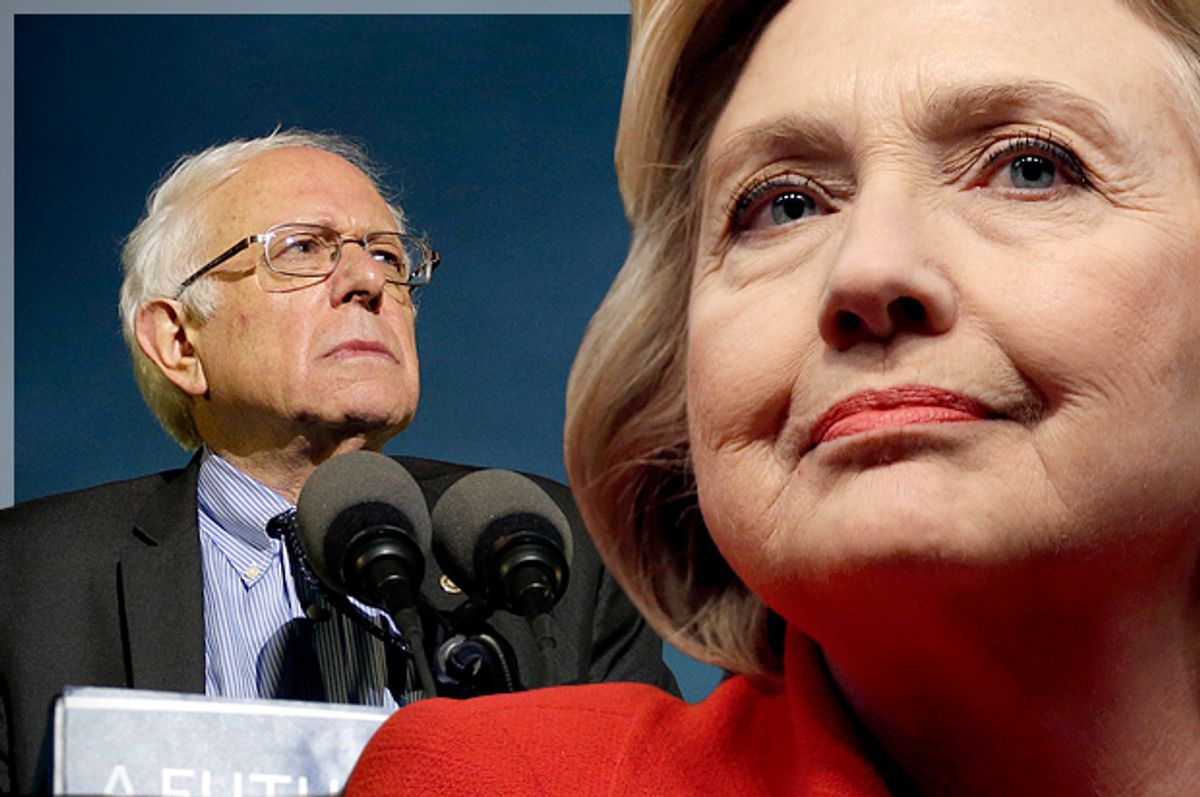 In early April President Obama warned against the danger of a Tea Party of the Left, which might “stake out positions so extreme, they alienate the broad public.” The media correctly understood this as a warning to Bernie Sanders’ supporters.

Yet if you look at the impact the Tea Party activists had in changing the direction of the Republican Party, it seems clear that this is precisely what the tens of millions of people who support Sanders need to do, and they need to start building it now, before the Democratic National Convention in July.

Without that kind of movement, willing to work both within and outside the Democratic Party, willing to defeat Democrats in primaries or even to run against them in a general election, the status quo will continue: subservience to Wall Street and the policies favored by the 1 percent whose money shapes elections on the national and state levels, the false belief that terrorism can be defeated by our own brand of terror (war through drones), fossil fuels will continue to be extracted from the earth and accelerate global warming, millions of people languishing in our prisons (many for nonviolent crimes), social services (child care, health care, elder care, etc.) will continue to be sacrificed on the alter of “no new taxes,” the economy will continue to depend on endless “growth” with devastating consequences for the life support system of the planet, the U.S. will continue to have the most expensive and least successful health care and pharmaceuticals in the advanced industrial countries, the values of selfishness and materialism that are the “common sense of global capitalism will continue to pollute friendships and families causing psychic pain and family instability, and cynicism toward government and despair at the possibility of fundamental change will give new opportunities for racist, sexist, xenophobic and fascistic forces to gain public credibility.

Pessimistic? No, this is exactly what happened in the past seven years of the Obama presidency, and it will only worsen unless there is some ongoing political movement capable not only of speaking to the economic pain so beautifully articulated by Bernie Sanders but also capable of addressing the hidden psychic injuries of the globalization of selfishness that impact not only the poor but almost everyone in the society.

Such a movement would have to overtly challenge the capitalist system. Minimally, it would support the ESRA—Environmental and Social Responsibility Amendment to the U.S. Constitution (which bans all money from elections except public funding and requires corporations to prove a history of environmental and social responsibility once every five years to a jury of ordinary citizens who would hear testimony from people around the world who have been impacted by the operations, policies, and advertising of that corporation (check it out at www.tikkun.org/ESRA). And this movement would reject the fantasy that “homeland security” can be achieved through (military, economic or cultural) domination of others around the world, and instead insist on a strategy of generosity manifested in a Global Marshall Plan and showing the people of the world that the US genuinely cares about their wellbeing (check out the details at www.tikkun.org/gmp).

There are tens of thousands of Sanders activists in states that have already finished their primaries. Bernie could call upon them to create statewide conventions in which they organize themselves into an ongoing movement, precisely what Bernie said needs to happen. Yet unless he explicitly articulates how folks can do that, provides a structure for doing so, and allows his supporters to access his supporter lists to build a movement, it is not likely to happen. In the aftermath of his large loss in New York, particularly in New York City which is usually the symbolic center of American progressivism, we at Tikkun magazine have already gotten many notes indicating despair and a desire to retreat from all politics, a reaction to the way that election seemed to systematically disenfranchise many thousands of voters and to the bare facts that Bernie’s trailing in the delegate count and in the popular vote makes them feel that there is little chance that we will have nothing to inspire us in the next eight years of American government. While Bernie himself will obviously concentrate on the remaining states that have not yet held their primaries, his followers should be urged to use this time to organize a new national organization.

What gave the Tea Party its power? Well, first it could rely on organizers funded by rightwing organizations and wealthy funders. We don’t have that on the Left, but at this moment there are many volunteer organizers who would respond to an appeal from Bernie. Next, the Tea Party had media attention—indispensible to reaching out to large numbers. Just look at the way the pro-democracy demonstrators last week in D.C. were almost totally ignored by the media even after a thousand of them were arrested in nonviolent protests, and you realize that this moment when Sanders’ ideas are being given attention will pass if he doesn’t win the nomination, so this is the moment to begin to organize. Finally, the Tea Party people focused on unseating members of their own party (both nationally and locally) who did not share their worldview. Fearful for their political future, many elected officials quickly moved to the Right. The same thing could happen to the Democrats if progressives organized by Bernie were to plan now to run for office at every level in the 2018 congressional election primaries (and sooner in local and state elections) —against the mainstream Dems who would block Sanders’ program should he be elected in 2016 and who refuse to endorse key elements of Bernie’s program. These are the people in the Democratic Party who have been doing their best to move it from a center/liberal to a center/right force as it was under Bill Clinton in the 1990s. A Tea Party of the Left would also play a role in keeping a Hillary Clinton presidency from abandoning the progressive ideas that she gradually started to embrace in somewhat watered-down form during this presidential campaign in response to the pressure that the Sanders campaign was creating.

What should such a party be called – how about “Love and Justice” party? Social and economic justice is no stretch for progressives, but love? Here we touch on the weakness of a narrowly economic approach that has often limited the appeal of Democrats in the past. Yet if progressives were honest with themselves, they’d realize that a major part of the reason that they are in progressive politics is because they really want a New Bottom Line in our society, so that our social, political and economic institutions would be judged ”successful” to the extent that they maximize love, (economic and social) justice, environmental sustainability and help us transcend a narrow, utilitarian approach to nature and other human beings (the New Bottom Line). This kind of discourse, sadly absent from Bernie’s vocabulary most of the time (though in his heart I know he agrees with this), and often resisted by those who feel uncomfortable with any discussion of psychological and emotional realities, makes it possible to raise the issue of how family instability and divorce, often an issue owned by the Right, could be more effectively addressed by the Left if we recognized that the family crisis is produced in large part by the selfishness and materialism that is the intrinsic ethos of global capitalism.

In place of the globalization of selfishness, our Love and Justice party would call for the globalization of caring-- caring for planet Earth and all its inhabitants. To make our world “safe for loving families, caring relationships, and environmental sustainability we will need to overcome the ethos of global capitalism—and that insight will never emerge in the Democratic Party till it has been transformed by a Tea Party-style movement of the Left that is un-intimidated by those who believe that a new bottom line of love and caring is extremism and utopian fantasizing. Just as the civil rights and anti-apartheid movements, the feminist movement, the movement for LGBTQ rights and marriage equality were all dismissed as “unrealistic,” so too the Love and Justice movement will be ridiculed by the mass media. Yet if it speaks to the longing of most people on the planet for a world of love and generosity and social and economic justice it will break through the media manipulation and repression from those loyal to the 1% and will liberate tens of millions of people to envision the world they really want and then to become active in building that world.

Bernie will be under immense pressure after the Democratic Convention to either support Hillary should she win the nomination (and not be seen as undermining that effort by creating a different organization), or to concentrate on winning himself should he be the nominee. And if Hillary wins the presidency, the media will give little attention to Bernie’s efforts to create a movement at that point. If she doesn’t win, and he starts creating this kind of movement during the fall campaign, he will be blamed for her loss. That’s why he needs to do it now.

So Bernie, use this moment to mobilize your activists in states that have already had their primaries, and have that movement already happening before the Democratic convention in July. You just might find that some of those “super-delegates” have second thoughts if they realize that their jobs may be at stake when a Love and Justice Party emerges in their own home districts.