Maine's Tea Party governor argues drug addicts be left to die, while Trump outs himself as a complete charlatan 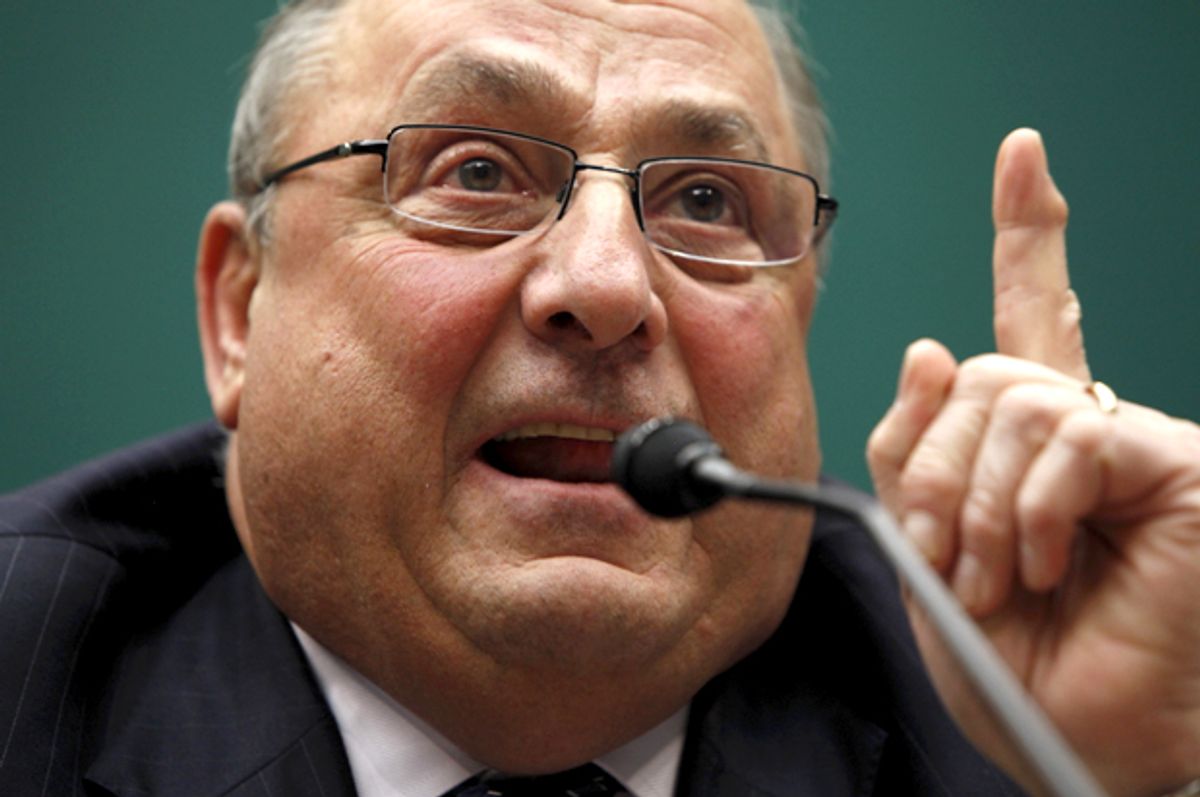 Donald Trump got oh-so-presidential this week. Being presidential for Donald Trump consists of insulting Harriet Tubman (as, gasp, politically correct), imitating call center workers with Indian accents, and magnanimously suggesting his fellow Republican reality show star, Caitlyn Jenner, should get to use whatever bathroom she wants. Whoa. Impressive.

That last one earned NBC’s comment that Trump is "LGBT-friendly," apparently revealing an extremely low bar at the network.

It’s a low bar for Trump in general, of course. Or as Van Jones put it to Bill Maher Friday night, “Just because he didn’t drop trou [translation, trousers] in one speech, doesn’t mean he should be on Mt. Rushmore.”

Here are some lowlights from the far right this week.

1. Maine Gov. Paul LePage delights in being ever more despicable.

Maine’s Trump-supporting, tea partying governor climbed higher in the douchebag gubernatorial contest this week, when he inexplicably and cold-heartedly vetoed a bill that would have helped save lives. The bill would have allowed the state’s pharmacists to dispense the lifesaving, overdose-reversing drug naloxone, or Narcan, which keeps heroin overdose victims alive for precious moments while medical help is on the way.

Actually, it’s not quite true that LePage did not explain his callous decision. In a statement about his veto, he wrote, “Naxolone does not truly save lives; it just extends them until the next overdose.”

In other words, he does not think people who use drugs have lives worth saving.

As Rachel Maddow pointed out, the same logic might be applied in other situations, like cancer. We’re all going to die eventually, so why extend anyone’s life.

Then again, LePage seems to particularly have it in for those who do drugs, though he stopped short of calling for their public guillotining, his suggested method of treating drug dealers.

Former actress-turned-Fox News commenter (and weird cameo at the Academy Awards) Stacy Dash was trotted out this week to comment on black people and how they are doing everything wrong, again.

She managed to spew more than her usual share of inane comments.

First, asked to eulogize Prince the day after his death, she made rather a point of saying he was not black, for some reason, or that she did not think of him as black, and that was somehow a good thing and a compliment.

“You didn’t look at him as a black artist or an artist of any color,” she said. “He was just Prince.”

At week’s end, she was in a lather about something President Obama said in the U.K., and something he did not say.

“I can’t believe that he did not even address that today is the anniversary, the day to the month, of the anniversary of Brussels, that he did not even address that. He addressed Earth Day. That’s appalling. I’ve never seen a president bore so many people with this dribble [yeah, she said dribble; she meant drivel. Whatever] ...and embarrass the United States of America like he just did."

Boy, that is a heck of a lot of dribble.

3. Trump admits it’s all one big entertaining reality show for him.

The likely GOP nominee Trumpster tipped his hand in an interview on Fox on Saturday. He promised his supporters that he’s not going to let that whole presidential act go too far.

“I can tell you that if I go too presidential, people are going to be very bored,” he said, just before acknowledging that his supporters would “fall asleep.” This would be the worst possible thing, far worse than his supporters becoming violent, or, let’s face it, going to the polls and voting for him.

In a preview of how really entertaining and fun he’s going to be, he characterized likely Democratic nominee Hillary Clinton as, “the worst possible representative a woman can have.”

Literally! Worse than, say, the Manson girls. He called her “Crooked Hillary," and added, “The only thing she’s got going is the women card.”

The women card? So, everything but being a white male is apparently a card.

Message to Donald Trump supporters: You are getting sleeeeeepy. You will wake up from this fever dream in December.

Speaking of Trump supporters who'd be better off in a coma...Ann Coulter. Rather than lulling her to sleep, the new, more presidential version of her candidate crush is giving her apoplexy.

She expressed her distaste thusly in a tweet: "I wish Trump would go back to retweeting juvenile photos of Heidi Cruz. I hate the new Manafort & Black Trump."

Manafort, in case you missed it, is the name of Trump’s new campaign manager, the one who is giving the Donald his presidential, Republican convention-ready makeover.

Mentioning the Heidi Cruz tweet was a measure of Coulter’s desperation, since she had previously criticized her boy Donald for making the unflattering tweet comparing his supermodel wife Melania with a particularly unflattering shot of Heidi. Shortly after, Coulter said defending Trump is "like constantly having to bail out your sixteen-year-old son from prison."

Now that he has gone back to offensively mocking people with foreign accents, all is well between the two sweethearts. Upon hearing that Saturday morning, Coulter tweeted: "Perhaps I jumped the gun. The Trump we love is back!"

In case you were wondering what singer and actor Pat Boone has been doing lately, the answer is losing his mind. The celebrity-turned-conservative activist has made it his mission in life to destroy a very great evil in the world: Saturday Night Live.

Now, we’re the first to admit that Saturday Night Live has not been up to snuff for a while in the comedy department. Kate McKinnon is great and does a pretty good Hillary, but hasn’t Kenan Thompson reached his sell-by date yet? Weekend Update is getting better, but still pretty meh.

But it turns out Boone’s criticism is just a tad harsher than the show’s failure to tickle his funny bone. After viewing a recent skit about how "God is definitely gay," Boone called the show “blasphemy,” and said the cast is “Satanic” and “bound for hell.”

Nothing unhinged about that.

In an interview last night with Alan Colmes, Boone said that “there should be regulations that prohibit blasphemy” and that the Federal Communications Commission should punish networks that air such blasphemous programming.

When Colmes asked if he would “like the FCC to declare that a show like Saturday Night Live or any other show can’t do that kind of humor,” Boone agreed: “You cannot do blasphemy, yes.”

Boone, insisting that “at least 90 percent of the American public” wants this kind of censorship, specifically said that SNL or any program that calls “God by some profane name” would be in violation of such a blasphemy restriction.

Boone spent the rest of his interview time wondering why Donald Trump is not still calling for President Obama's birth certificate.