Bill Clinton can't stop screwing up: Why his latest broadside against millennials reveals an underlying problem

The 42nd president is a charming politician, but this year he's been more a liability than asset on the trail 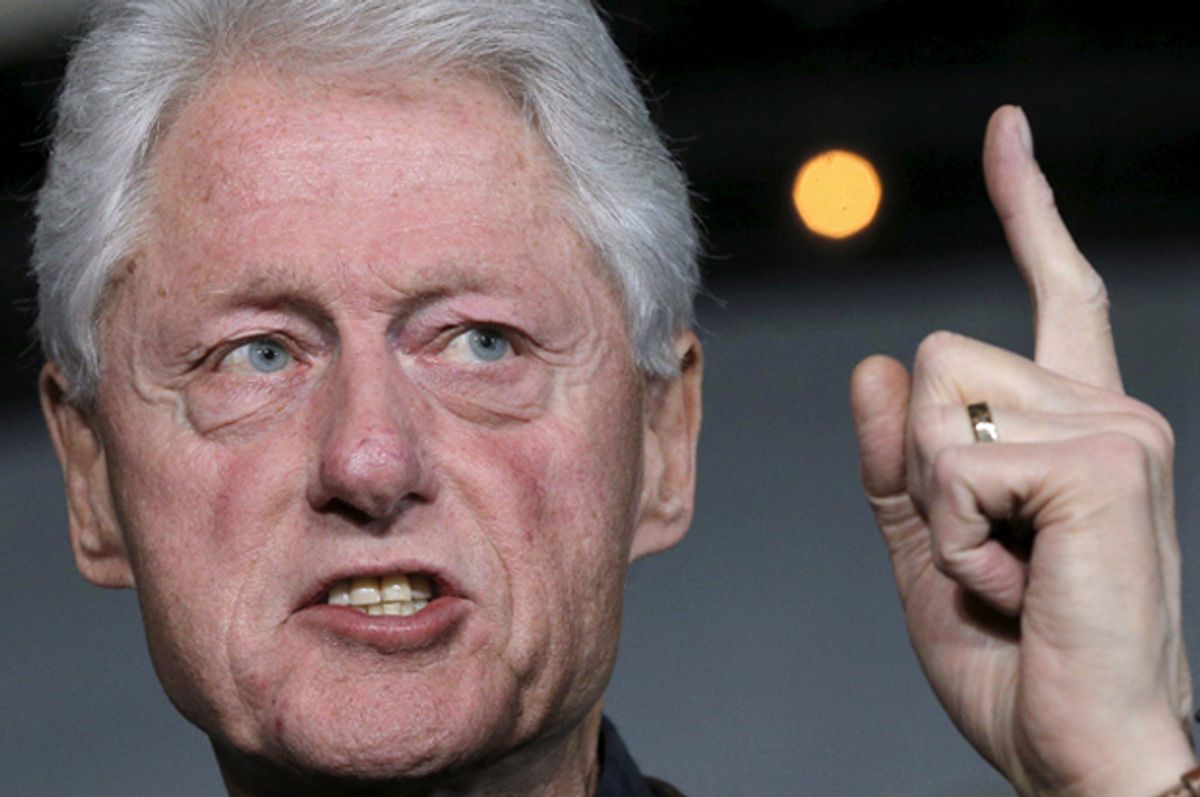 If the Clinton campaign is hoping to get young people out to vote for Hillary in November, it may want to start thinking about sidelining one of its most well-known surrogates: her husband.

Though still charming and well-liked after all these years, Bill Clinton has not been very helpful to his wife’s campaign thus far; if anything, he has caused more harm than good, with several ill-advised remarks that have alienated voters whom Hillary will be vying for in the months to come. The former president has recently gone on a defensive rant about his notorious crime bill, claiming that BLM protesters are “defending the people who kill the lives [they] say matter,” and has condescendingly joked that Bernie Sanders supporters think you can “shoot every third person on Wall Street and everything will be fine."

On Thursday, he once again put his foot in his mouth, this time blaming young voters, who tend to support Sanders over Hillary, for current economic disparities. “The reason that there’s so much anxiety, intensity, anger, blame in this election is that 80 percent of the American people have not gotten a pay raise since the crash eight years ago, after inflation,” said Clinton, at a rally in Pennsylvania. A valid observation, but Bill just couldn’t help taking a swipe at all of those young voters who overwhelmingly support his wife’s opponent: “If all the young people who claim to be disillusioned now had voted in 2010, we wouldn’t have lost the Congress, and we’d probably have our incomes back.”

Of course, it should be noted that a large percentage of today’s youth vote was not even eligible to vote in 2010, and many other groups also failed to turnout in large numbers. Moreover, the independent vote, which shifted to the right that year, was the most important contributor to the Republican rout.

Still, it’s true that if voter turnout had been higher, Democrats would have done significantly better against Republicans. Indeed, Bernie Sanders has been making this point throughout his campaign.

But who is to blame for low turnout, which tends to be a consequence of political apathy and cynicism? First of all, the economy was still in deep red — which, in hindsight, was not a surprise, considering the world had just gone through the worst economic crisis in 80 years. While President Obama’s stimulus package (along with Fed policies) had succeeded in rescuing the nosediving economy, it was far from robust, and with Democrats in control of the government, 2010 was inevitably going to be a tough midterm. (Today, there is virtually no debate among economists that the Recovery Act worked and prevented a depression — but Republicans unfortunately won the public relations battle.) Furthermore, there was large number of vulnerable seats in right-leaning areas, which made a GOP blowout all the more unavoidable.

What tends to be forgotten, however, is the uninspiring platform that Democrats ran on in 2010. The Obama administration had done a lousy job selling the stimulus and the Affordable Care Act to the people, and the extreme right, funded by ideologue billionaires like the Koch brothers, capitalized on this with a deluge of anti-Obama propaganda and campaign funding for Tea Party candidates. (This was conveniently   the first post-Citizens United election, allowing billionaires to spend millions on single candidates.) For many Democrats running for reelection — particularly in vulnerable swing vote areas — their platform was gloomy and sheepish. “Stimulus” had become a dirty word, and Democratic politicians failed to defend the policies of Obama or fight for a progressive agenda. (Again, the Obama administration is largely to blame for these PR failures; even the president came across as doubtful at times.)

When up against a Republican Party that was almost religious in its opposition to Obama and his policies; and whose politicians were zealously devoted to their beliefs (regardless of how much those beliefs conflicted with reality), an indecisive Democratic Party whose candidates were afraid to utter the words “stimulus” or "Obamacare" was never going to walk away from 2010 unscathed.

Which brings us back to 2016. With Hillary Clinton looking more and more like the Democratic nominee, one can anticipate the platform she will be running on, and it isn’t exactly inspiring, starting and ending with two words: Donald Trump.

Only Hillary can stop The Donald and his reactionary ideas. A vote for anyone other than Hillary is a vote for the backwards and dangerous GOP.

And if that doesn’t inspire voters to come out and vote for Hillary (and it very well may: Trump has pissed off a lot of people), it’s their own damn fault!

As Bill said, if Democrats had kept Congress in 2010, incomes would have probably risen. Of course, if Bill hadn’t capitulated to the Gingrich Congress and supported right-wing legislation like the crime bill, welfare reform, financial deregulation, NAFTA, and so on, a lot of things might have turned out differently. (One can only imagine if Clinton had listened to Brooksley Born’s prophetic warnings about the derivative market instead of Bob Rubin and Alan Greenspan.)

As I argued last week, the Democrats need to stop being the “lesser of two evils” party and start promoting a truly progressive agenda if they hope to capture young voters. They need to inspire, not fear-monger or threaten. Across the country, young people have supported Bernie Sanders more than any other candidate — by a long shot. It turns out millennials like their candidates authentic, principled and progressive. The neoliberal, poll-driven political expediency that Bill Clinton (and Hillary, to a lesser extent) made his career on has not aged well. And blaming young people for the political dysfunction and corruption of today is certainly not a winning strategy.