"Complete and total destruction of the Republican Party": Former Reagan official Bruce Bartlett on why he backs Trump 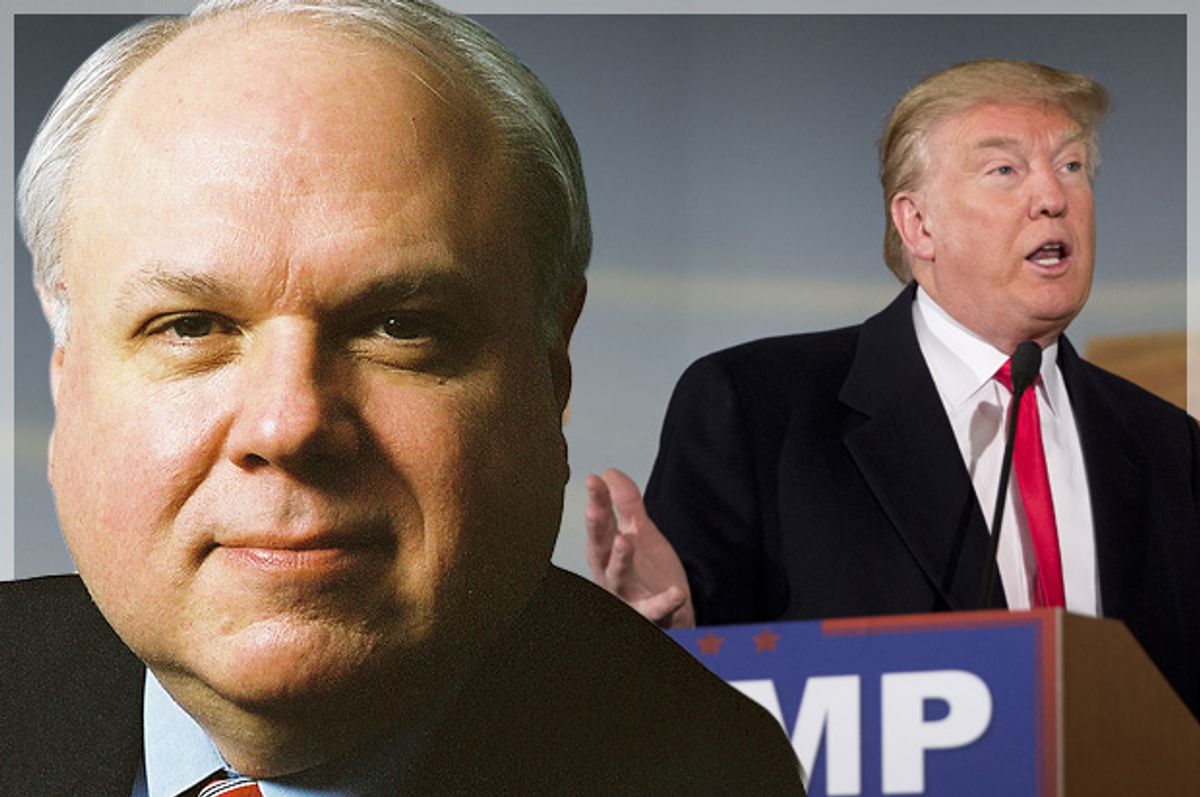 Regardless of how you feel about Donald Trump, his ascendance as the frontrunner for the Republican Party’s 2016 presidential nomination signals major changes within the GOP. Large segments of the Republican Party and the conservative movement have arrayed themselves in opposition to Trump to ward off the political reckoning his candidacy threatens, but there are some people who want Trump to win precisely because his nomination would inflict much-needed violence upon the Republican Party as it currently exists.

Bruce Bartlett, a former official in the Reagan and George H.W. Bush administrations and a longtime critic of the GOP's increasingly conservative politics, sees Trump as both a product of the Republican Party’s decline and a potential catalyst for its eventual reclamation. I talked to Bartlett about why he voted for Donald Trump, what he sees in the GOP’s future, and whether something worthwhile can be salvaged from a political party that looks to be on the verge of cracking up. The transcript has been lightly edited for clarity.

I wanted to talk about 2016 and Trump and the future of the GOP. You are a former Reagan official, you worked for George H.W. Bush, and you voted for Donald Trump in the Virginia primary. And I was hoping if you could just explain why.

I think the Republican Party is sick. It’s dying, it just doesn’t know it. And I think anything that speeds up its demise is to the good, because then it can reinvent itself and return as something healthy. Or you could use an addiction metaphor, where people have to hit bottom so that they can reach out and ask for help before they can cure themselves. I think that Trump is a symptom of a disease of rampant stupidity, pandering to morons and bigots and racists and all the sort of stuff that defines today’s Republican coalition. And I just think it’s awful. It’s terrible for the country in a great many ways that I don’t need to tell you. And I think that we need to have a healthy two-party system. We need to have a sane, functioning conservative party and a sane, functioning liberal party. And I think that half of that equation, at least, is not working, and it affects the other half.

So I think it’s just bad for the country. So I think that giving Trump the nomination is the surest path to complete and total destruction of the Republican Party as we know it. And I look forward to him getting the nomination for that reason. I think he will have a historic loss. I think he may well bring in a Democratic Senate. But more importantly, my hope is, at least, that he will lead to a really serious assessment of the problems of the Republican Party, and lead to some opening of thought, opening of discussion, conversation among groups that have been sidelined for quite a long time. Mainly moderates and people of that sort who have been just pushed to the sidelines in favor of ever more rabid, nonsensical, right-wing authoritarianism.

But I also don’t think it really makes all that much difference whether Trump gets the nomination, because he’s already succeeded in destroying the Republican coalition as far as the general election is concerned. Because, look, if he doesn’t get the nomination, he’ll probably do everything in his power to guarantee that whoever does get the nomination is defeated. So either way the party is looking at historic losses, historic defeat. And I think that is really, really a wonderful thing.

One thing you mention, you’re talking about the effects Trump would have on down-ballot races, on Senate races in particular. One potential pitfall that I see in all this is that when you’re talking about the down-ballot races, the Republicans who would be most endangered by a Trump rout would be the moderate, blue-state Republicans who already face tougher reelection odds. Are you concerned that a Trump rout might end up purging from the party precisely the people that you say it needs to have?

Perhaps. It kind of depends on how Republicans react to and try to deal with the consequences of Trump at the top of the ticket. One of the things you hear some talk about is them literally running a third-party Republican candidate against Trump, and I think the reason is because what they’re afraid of is that the main thing that Trump will do is keep Republicans home on Election Day. That is, they’re not going to come out and say “I can’t vote for Trump, I’m going to vote for Hillary Clinton” or whatever. They’ll simply stay home on Election Day and therefore their votes will not apply to the down-ticket races, rather than going to vote and just leaving blank your vote for president and voting a straight Republican ticket.

So they’re desperate to get those people out to give them some reason to go to the polls, but I don’t really know – it may be that Hillary can make inroads among Republicans. I don’t know. There may be a goodly number of Republicans who moved from being solidly Republican to being Republican-leaning independents who have been continuing to vote Republican even as their loyalty to the party has diminished. This might be enough to push them over and say “I give the fuck up, these people are hopeless, I’m just going to become a Democrat, I’m going to vote for Hillary.” So it might be that this is the tipping point. It’s simply too soon to say.

Well that leads to another question. Right now you are seeing within the GOP and within the conservative movement, there is a divide. You have the #NeverTrump people on one side, and you have people like Jeff Sessions and Chris Christie and Rick Scott, people who’ve endorsed Trump. If Trump does end up getting the nomination and people who now say they are #NeverTrump, when they’re faced with a choice between Donald Trump or President Hillary Clinton, do you think that the #NeverTrump movement, the energy behind that will continue? The divide that we’re seeing now, I’m sure you’re happy to see it, but do you think it would survive in the face of a Clinton candidacy?

Probably not. At least in that form. It’s possible – with super PACs and such it only takes a couple of billionaires to finance a pretty impressive operation. If they want to go around running anti-Trump ads in the general election, that’s fine by me. I’m disinclined to think that would really happen. Party loyalty and tribal loyalty are very, very intense inside the Republican coalition, and I think what you’ll get is a lot of pro-forma endorsements of Trump. But very, very few people will actually do any work to help him get elected. You’re not going to see people going around knocking on doors and putting up signs and bumper stickers and stuff like that that is very important in terms of turnout on Election Day.

I think the regular Republican Party machine will do everything it can to help its House and Senate candidates. Mitch McConnell has already told Republican senators that they are free to run anti-Trump ads if they think that’s what will help them survive. And I think they’ll simply concentrate all their efforts on keeping the House and Senate, and maybe that will be enough. I don’t know.

But the problem is that they’re victims of their own overselling. That is, they told people for years “just give us control of the House and Senate, we’ll fix all these problems, we’ll repeal Obamacare and take care of all that stuff.” And they’ve had control now for six years, and all these problems that they were sent to Congress to fix are still problems from their point of view. And I think it’s going to be hard to motivate the kind of turnout that got them elected in 2010 when people are saying “what the fuck, who cares, obviously it makes no difference, these guys are all part of the same problem, screw all of them, let them stew in their own juice.” That’s another possible reaction that they will get, which would help convert this election into a landslide loss for the Republicans.

Let’s say that Donald Trump does take the nomination, and he goes on to get crushed in the November election. As you said, it would be an opportunity for the “sane wing” of the party to reassert control. Given that so much of the GOP has given itself over to this hardline conservatism in the Obama era, who do you see as someone emerging in that role to lead the “sane” caucus post-Trump?

Well that’s a really excellent question. The bench is extremely thin, and there’s absolutely no leader for a Republican Party that I could support. I was interested to notice just today that Jon Huntsman’s family has bought the Salt Lake City Tribune. He was kind of the last guy to run for president on a genuinely moderate platform. [John] Kasich has moderate rhetoric, but his policies are just as hardline as all the others. So maybe Huntsman will reemerge as a voice of some kind in the party. For years I’d been hoping that Colin Powell would step up, but he obviously is not going to do that. I don’t know. If there’s demand, somebody will supply it.

One name I wanted to bring up is that of the House Speaker, Paul Ryan, who’s been positioning himself of late as this Trump alternative, a voice of reason and rational discourse. He’s very popular within the party and seems like a natural candidate to shift into that post-Trump leadership role. Do you see any way in which someone like Ryan who has that popularity but is still extremely conservative, particularly on economic policy, do you see him as being able to effectively reform the GOP at all?

No. I think Ryan is in a much more serious position than people think he is. He’s slowly sliding into the same problems that destroyed John Boehner, which is he has a bunch of lunatics in his caucus who are effectively able to be the tail that wags the dog. What Ryan would have to do is make peace with the Democrats and be willing to have a governing coalition made up of Democrats and enough Republicans to get legislation passed and be a Speaker for not just the majority party, but for some kind of fusion party.

But I don’t think he’s got the support and I also don’t think it’s in his nature to be that kind of leader. The only way he could get reelected as Speaker would be with Democratic votes, and that sort of thing simply doesn’t happen. So he would just be signing his own political death warrant if he tried to do something like that, and then he would disappear from view.

One last question – what policy shift would be you be looking for specifically as a sign within the GOP that it is moving towards something approximating the sanity, the moderation that you’re talking about?

Well, if they could simply do their job of passing a budget that would be an enormous threshold even though it’s really nothing. It’s the lowest possible thing you could expect from people. But some recognition on the part of some people at the top that global warming is a real phenomenon, that we have to stop denigrating science and pandering to religious kooks. Things are so terrible right now that simply expecting the absolute minimum is a big threshold to cross.